When a La Joya police officer tested positive for COVID-19 last week, the city knew who to turn to.

La Joya City Administrator Jacqueline Bazan was informed of the case Thursday, June 25 according to a news release from the city. 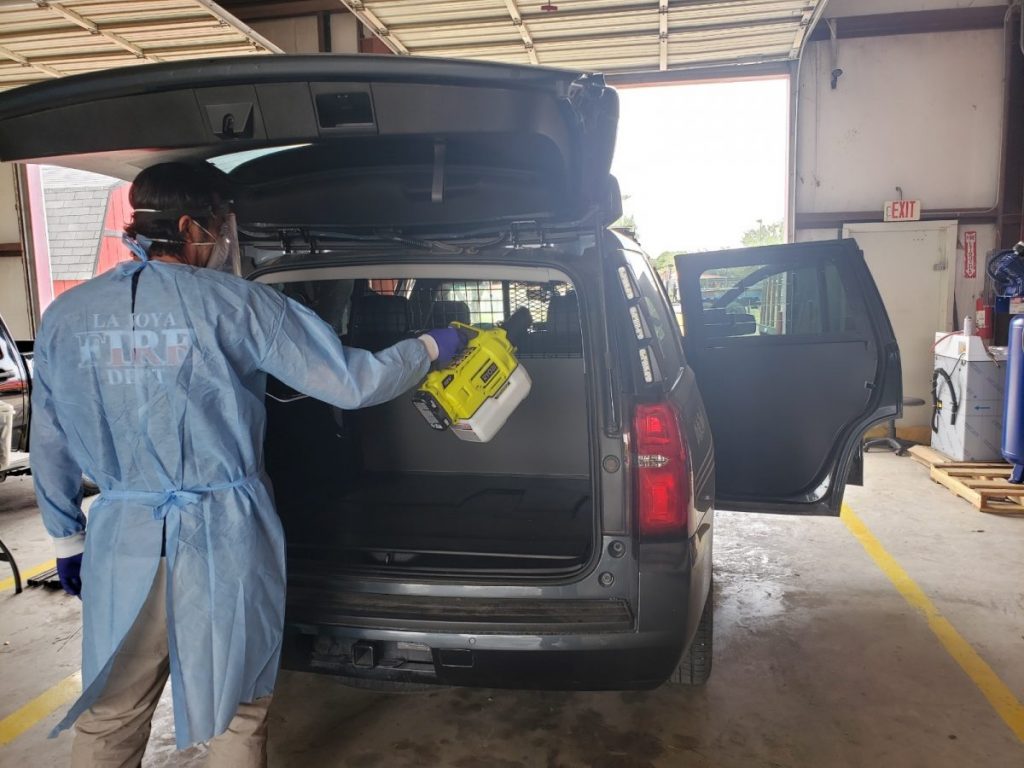 In the news release, Bazan said city employees who may have been in contact with the officer were notified by the city’s Emergency Management Strike Team.

The strike team, Bazan said Monday, ordered city staff to be tested and three other city employees to be quarantined as they waited for results. The team, composed of members of the city’s volunteer fire department and volunteer police officers, disinfected the city hall and police station and all police vehicles.

“We were notified through fire Chief Frankie Salinas and emergency management Coordinator Ramon Gonzalez of the positive case and they handled the process of going back, identifying who this employee had direct contact with and quarantining those persons,” Bazan said. “We’ve been using them since the beginning of June to sanitize all city buildings as a precaution and address any and all issues related to COVID-19 from the community.”

All members are being paid overtime for their work through the $489,402 the city received in CARES Act funding for COVID-19 expenses, Bazan said.

The creation of the strike team had been in discussions for weeks before the city began seriously discussing it in May after seeing a sharp increase of COVID-19 cases in the city after the state governor reopened much of the state and rendered all local orders enforcing the usage of facial coverings and others null.

The city currently has 23 active cases of the virus, Bazan said.

“From March through the end of May, we only had one case in La Joya total. Then during the first week of June, we started seeing more cases,” Bazan recalled. “And not just one new case a week, we began seeing several new cases per week. We decided it was time to start an emergency strike team who would be on call for any and all emergency issues related to COVID-19.”

The strike team is trained to disinfect and sanitize all areas in the city where someone in La Joya who tested positive for COVID may have had an interaction with someone, Bazan said. They regularly disinfect city buildings and enforce local ordinances such making sure all city employees wear gloves and masks at all times and disinfecting all books in the city library before they’re checked to patrons, Bazan said.

All members of the strike team have PPE and cleaning products to ensure their safety, Bazan said.

“We trained these people to have them ready with the equipment they need to handle these situations immediately so we’re not scrambling to figure out what to do in an emergency,” Bazan said, adding that as long as more COVID-19 cases pop up in the city and throughout the Valley, the city will need its strike team.

“We’ve seen cases in La Joya escalating as we speak, even in our own city hall,” Bazan said, adding that the police officer who tested positive for COVID-19 was the first city employee to test positive for the disease.

“And that employee had been at work so we felt it was necessary to have this team ready,” Bazan said. “When these things happen, you don’t get any advance notice. You don’t know what emergency related to COVID-19 will happen and it’s not like its a regular emergency where you put on your uniform and badge and that’s it; we have to take certain precautions based on what the situation is due to COVID.”

The CARES Act funding runs through December and Bazan said the city has plans to grow its strike team by adding reserve police officers.

La Joya residents with any COVID-19 related concerns are urged to call city hall at 956-581-7002 and will be connected to the strike team.