Erosion spotted along the site of a privately constructed border wall near Mission became a point of discussion Wednesday during a joint federal pretrial court hearing between multiple parties.

U.S. District Judge Randy Crane presided over the hearings for the lawsuits filed last December by the U.S. Attorney’s Office in December on behalf of the International Boundary and Water Commission and by the North American Butterfly Association and National Butterfly Center Executive Director Marianna Treviño-Wright, respectively. 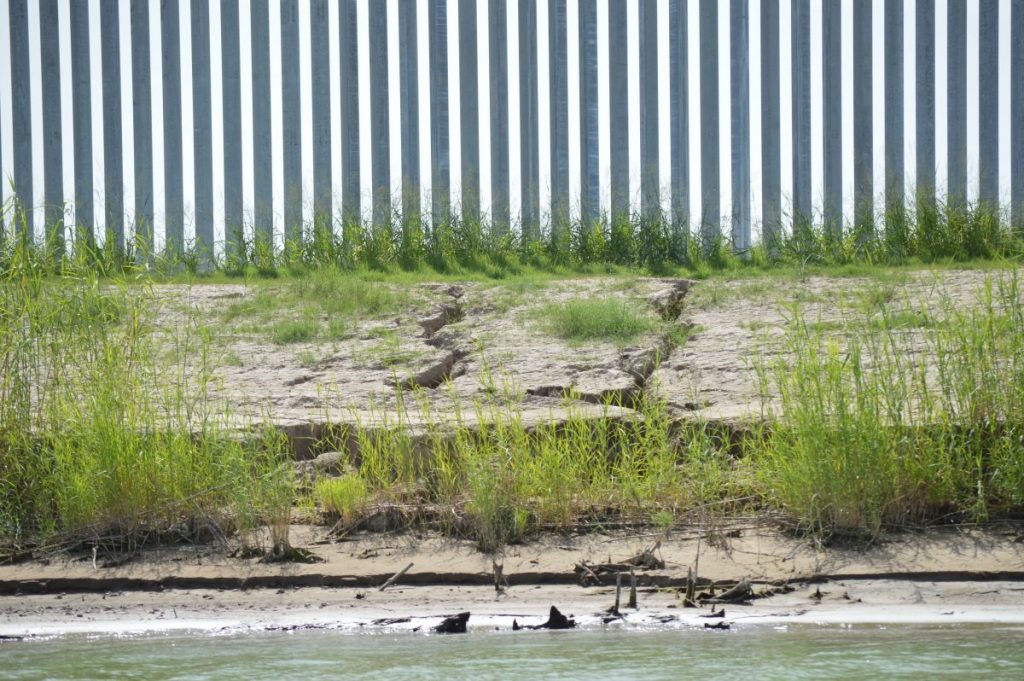 Both parties filed lawsuits against the defendants-Fisher Industries, TGR Construction and their parent company, Fisher Sand & Gravel Co., as well as property owners, Neuhaus & Sons after a three-mile stretch of border wall was constructed along the riverbank of the Rio Grande River, causing damage to the riverbank, according to the lawsuits.

The NBC lawsuit also names the non-profit fundraising organization, We Build The Wall, along with its president, Brian Kolfage as co-defendants in its suit.

During a hearing last May, the federal government argued that the border wall construction violates an international boundary treaty between the United States and Mexico.

Crane requested the defendants share their modeling data and results with the plaintiffs from both cases including with Mexico to ensure the models weren’t violating the treaty on their end.

“There were issues on location and a spot on the fence that needed remediation,” Crane recalled at the hearing.

“We’re trying to move forward with the clients to resolve this. We’re just waiting for availability on IBWC engineers and that’s where the government is at,” Hu said.

“We have identified in addition new erosion that has occurred at the base of the wall of the fence as well as the bank,” Eric Paxton Warner, an attorney representing the federal government said, adding that there are four other areas the defendants need to remediate or the wall could collapse.

Photos provided by the Trevino-Wright show that cracks have appeared on the base of the border wall and the riverbank is eroding along where the border fence has been constructed near the riverbank, creating a new embankment for the Rio Grande River.

“The erosion is occurring at the base of the wall and at their beachhead, where the river is cutting a new embankment,” Trevino-Wright warned after the hearing. “Also, there is no way for them to remediate the invasive plants because their seed is carried in the river, so they will germinate and grow wherever the river touches the land.”

Mark Joseph Courtois, an attorney representing Fisher Industries, noted that Fisher Industries is trying to address these issues but the ongoing COVID-19 pandemic has slowed down the process.

“We need to discuss this deflection and what it’s due to,” Courtois said. “We’re in disagreement on that issue and we need the engineers to come to a consensus. There’s a good chance to do that if they meet in the next few weeks.”

Courtois added that a crew will be arriving later this week to inspect the erosion issues that have been identified.

For attorney Javier Pena, who is representing the NABA in the second lawsuit, the erosion problems are highlighting issues with the border wall construction that were raised in the lawsuit.

“The entire foundation of the wall has been exposed, the water and rain is just undermining the entire structure of the wall,” Pena said. “Is it possible to remedy these issues? There’s some sections of the foundation where it’s just crumbled away. It’s not a solid structure anymore.”

In the lawsuit, the NABA stated that the wall would cause damage to the neighboring butterfly center by redirecting water and debris to the property.

“We’re seeing things that may be of grave concern to us like erosion,” Pena said.

Pena and Crane discussed how the two suits filed by the NABA and the federal government were being tied together due to discovery being made by the federal lawsuit is tied to discussions of property damage for the NABA lawsuit.

“We’ve carried along this case with the other case that does appear to be close to resolving in the next few months,” Crane said. “This case is hanging along but it does have different issues. We’re at a fork in the road to discuss what will happen to this case.”

Pena reminded Crane that the NABA lawsuit will still be around after the previous lawsuit is resolved due the NABA suing the defendants for defamation.

According to the lawsuit, the defendants have made claims on social media that the butterfly center and Trevino-Wright are engaged in human trafficking and drug smuggling activities, leading to harassment from supporters of the border wall construction.

Crane decided to keep both cases together and reset them for a new status hearing set for Wednesday, Aug. 5.

CORRECTION: An earlier version of this story misidentified Daniel david Hu, an attorney representing the federal government. It has since been amended.