In the face of a pandemic, two police officers died while doing their duty.

That’s the message McAllen police Chief Victor Rodriguez had during a Saturday press conference that occurred the same day two officers in his department were shot while responding to a disturbance that afternoon. 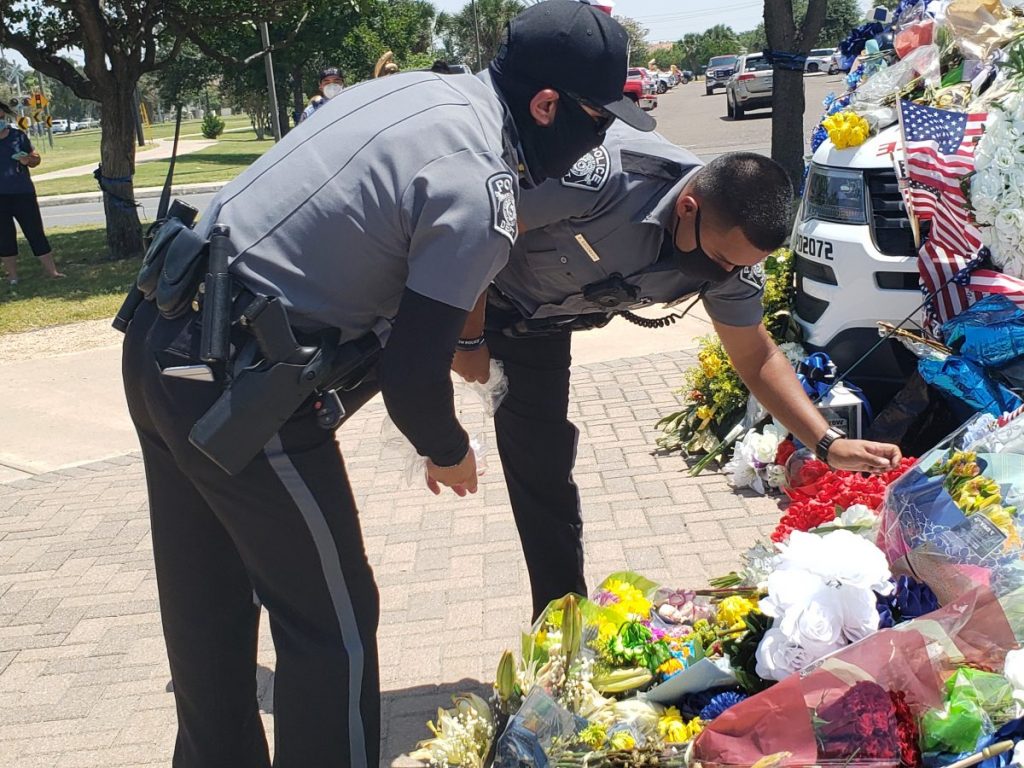 Edelmiro Garza Jr., 45, and Ismael Chavez Jr., 39, died from a fatal shooting when a suspect opened fire on them.

Garza and Chavez, officers who had nearly 12 years of experience with McAllen PD between them, were responding to reports of a domestic disturbance in a home on the 3500 block of Queta Street at about 3:30 p.m. Saturday.

When the officers approached the home in question, the suspect, 23-year-old Audon Ignacio Camarillo, opened fire on them. Camarillo died from suicide when more officers arrived at the scene.

“The suspect of the incident met our officers at the door, and shot them both,” Rodriguez recalled. “They knocked on the door of the residence…they were doing their job. That is the way you’re supposed to do it.”

The attack was sudden, Rodriguez said, adding that more police didn’t arrive at the scene until minutes later when officers driving by to check in on Garza and Chavez saw the officers were down.

“It was the first time we in McAllen PD knew we had officers down. The officers never had a chance to suspect deadly assault on them, let alone death at that moment,” Rodriguez said. “Officers did not draw weapons, did not fire, never had a chance…never suspected…”

Rodriguez was visibly pained during the Saturday news conference, a pain that is still being felt by the community nearly a week after the slaying.

According to Rodriguez, he had received calls from public officials, including state Gov. Greg Abbott, offering their condolences to the McAllen police department.

Members of the community are also sharing their support. A makeshift memorial for Garza and Chavez was created outside the McAllen Police Department with many leaving candles, flowers and other gifts in memory of the officers.

Many of the flowers had dried and wilted under the south Texas heat and the candles had melted and tipped over, leaving behind puddles of wax on the memorial.

Among the people paying their respects were Gabriela Garcia and her mother, Sharon. Both women recounted personally knowing the officers after Garza helped Gabriela with a stalking investigation.

“When my daughter was going through some rough times, officer Chavez made sure she was safe at home even off duty,” Sharon recalled. “He made sure the person stalking her wasn’t there, and it wouldn’t matter if he was on shift or off, he would call us to check in on her.”

Gabriela also recalled meeting officer Garza at her place of employment at La Plaza Mall when he escorted her and others outside the building during a robbery that occurred two years ago.

“It’s devastating that they’re gone, they did an outstanding job,” Gabriela said in tears. “They’re just doing their jobs, they’re here to serve and protect and now their families are left alone, and we’re praying for them.”

Funeral services for both officers began Wednesday with a public viewing for them at the McAllen Convention Center and a funeral the following day.

Officer Chavez Jr. was buried that same day at Valley Memorial Gardens in McAllen and Officer Garza, Jr. was buried at the Rio Grande Veterans Cemetery.

Due to the COVID-19 pandemic, many like cousins Rudy and Ray Castillo paid their respects at the makeshift memorial instead of attending the public viewing.

Ray admitted to feeling rage at news of the slain officers.

A memorial for slain McAllen police officers Edelmiro Garza Jr. and Ismael Chavez Jr. outside of the McAllen Police Department adorned with gifts from members of the community. Progress Times photos by Joe De Leon III

“They’re the ones who take care of us, and look what happened to them,” Ray said. “You gotta be there for them, they’re good guys who died as a result of something that should not have happened, it’s sad.”

Ray, who has a niece in law enforcement, said he now fear for her.

“I never worried about something like this happening to her, but now it’s something that I have to fear, it’s a difficult thing to think about but it’s now realistic.”

The Valley unfortunately is no stranger to officers dying in the line of duty.

The deaths of officers Chavez and Garza occurred the year following the death of Mission police Cpl. Jose Luis Espericueta who was shot and killed while responding to reports of an armed man.

“It’s been difficult for us as it brings back memories of our loss last year, it’s like we’re reliving the whole situation again, that’s what makes it difficult for us,” Mission police Chief Robert Dominguez said. “It’s a tragedy what is happening there. As fellow law enforcement brothers, we all share that loss.”

At the Saturday press conference, Chief Rodriguez said the department will gain support from the community.

“These are entirely very difficult moments. The officers came here to maintain peace. Instead, they were taken down by gunfire,” he said. “We are weakened for the moment, but the strength and resolve to serve our communities will allow us to do what we do everyday in the face of adversity, whatever the nature of it may be. In the face of the pandemic, officers went to the door today to serve, regardless of the threats to us, our health and family and safety. So we will rise again.”