In what’s being called an “unfortunate incident” by the Mission police chief, a Sullivan City commissioner was found dead in his home early Friday morning following a standoff with multiple law enforcement agencies that lasted for hours.

Gabriel Salinas, 39, was found dead after exchanging gunfire with Mission police and deputies with the Hidalgo County Sheriff’s Office, according to Mission police Chief Robert Dominguez. 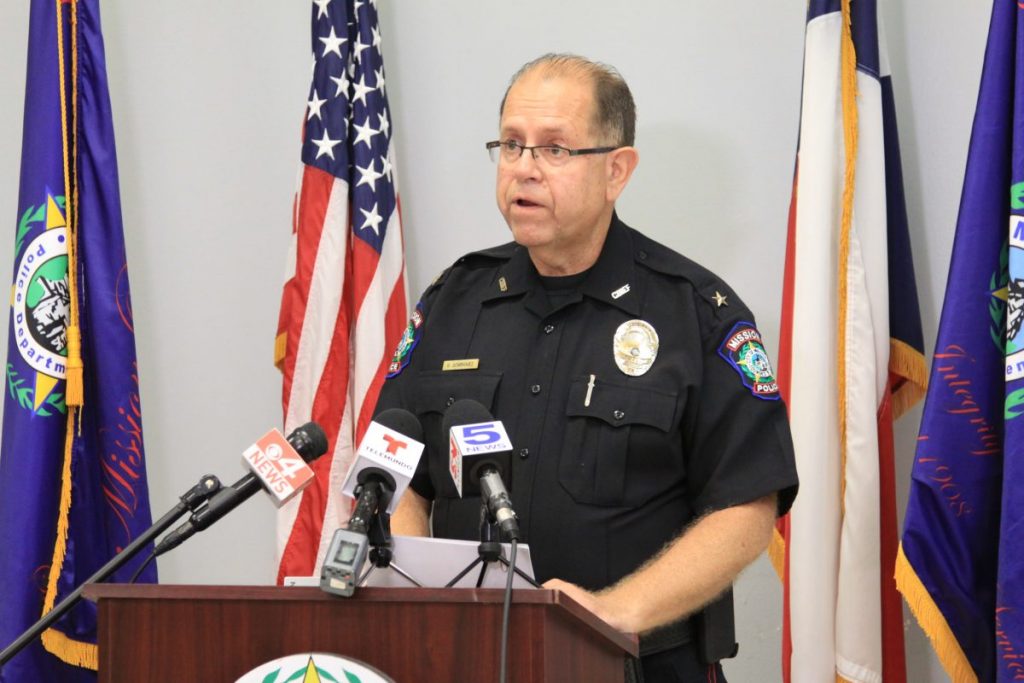 “It’s a situation we wish wouldn’t happen, but unfortunately it did,” Dominguez said. “It’s a difficult situation to tell a family member that a loved one has passed.”

Dominguez spoke during a Friday press conference where he revealed new details of the police standoff that stemmed from police responding to a domestic disturbance call shortly after 9 p.m. Friday on the 1400 block of Viejo Lane.

Salinas was found deceased in his bedroom from gunshot wounds Dominguez said he believes came from the exchange of gunfire and were not self-inflicted.

“He had injuries on his body and we learned later he was hemophiliac which made him bleed out fast,” Dominguez said. “That didn’t help when he was shot in sustaining those injuries; he bled out quickly.”

When officers responded to the scene, they found Salinas’ girlfriend, an unidentified 39-year-old woman, bleeding profusely at a neighbor’s house, Dominguez said.

“She had lacerations to her face and head and needed medical attention,” Dominguez said, adding that the victim ran to a neighbor’s house across the street from the incident and a neighbor called 911.

When officers approached the home, a four-year-old boy covered in blood ran toward police from the garage. Once the child was secured, Dominguez said gunfire was exchanged.

“Officers tried to make entry into the home and were met with gunfire,” Dominguez said. “Officers discharged weapons but they retreated to a patrol unit parked across the home and the defendant started firing at both officers. They were pinned behind one of the vehicles and called for backup.”

Backup came in the form of multiple agencies from the local, state and federal level as the SWAT teams from the Mission and Pharr police departments provided assistance as well as the FBI, Texas Department of Public Safety, the Hidalgo County Sheriff’s Department and others eventually surrounded the home, Dominguez said.

The pinned officers were able to get a rifle from their patrol unit and engaged with Salinas, Dominguez said.

Neighbors were evacuated from their residences during the police standoff that lasted through nearly 4 a.m. Friday, Dominguez said.

“Family and friends of Salinas arrived to the scene and assisted with police in trying to reach out to him by calling him,” Dominguez said, adding that Salinas’ sister provided to police her cell phone to give to Salinas to be delivered through a DPS robot from the agency’s special response team.

Hostage negotiators attempted to reach out to Salinas through his cell phone and a PA system for three hours to no avail.

The robot eventually went inside the home where it found Salinas lying dead inside his bedroom.

Salinas’ girlfriend was transported to McAllen Medical Center and remains in the intensive care unit following her surgery. Her son was treated for injuries to his knee and head and released to his family late Thursday night, Dominguez said.

Three other children that Salinas and his girlfriend have were not at the home at the time of the incident.

In a statement sent by DeLuna, the city expressed condolences to Salinas’ family and those injured in last night’s standoff

“We are praying for a full and speedy recovery and ask everyone to do the same,” the statement read, adding that due to the ongoing investigation and the nature of the case, the city will not comment further on the incident.

Despite the violent circumstances of the standoff, Dominguez grieved the death of Salinas at the press conference as it signified a failure in law enforcement’s goal of reaching a peaceful resolution.

“Unfortunately, it didn’t turn out that way,” Dominguez said. “When you lose someone, in this case the defendant of the case, it still matters to us as an agency. We value life, it’s unfortunate there’s a situation that ended like this.”

Dominguez said Friday the standoff was the latest in a rise of domestic disturbance incidents the country has been seeing due to the COVID-19 pandemic that has forced millions of people to stay in their house.

“People have been in quarantine in their homes trying to avoid this virus,” Dominguez explained. “Tempers flare, and unfortunately people don’t know how to deal with situations like that. That is unfortunately the tragedies that happen not only in the RGV, but throughout the country. Here’s another example of a situation of domestic violence and how tragic they can quickly become.”

Dominguez confirmed that Salinas’ had a previous run-in with Mission police after he was arrested last September and charged with assaulting his wife at the same residence.

“Unfortunately she later dropped those charges against him,” Dominguez said.

The investigation has been turned over to the Texas Rangers and an autopsy and toxicology report will be conducted on Salinas’ body, Dominguez said.