As the Rio Grande Valley continues to recover from the devastation left behind by Hurricane Hanna over the weekend, state Gov. Greg Abbott promised more aid to an area that is also facing a pandemic.

During a Tuesday press conference at the Texas DPS Headquarters in Weslaco, Abbott announced more state support to the entire Valley, which included converting the McAllen Convention Center into a healthcare facility for up to 250 patients recovering from COVID-19. 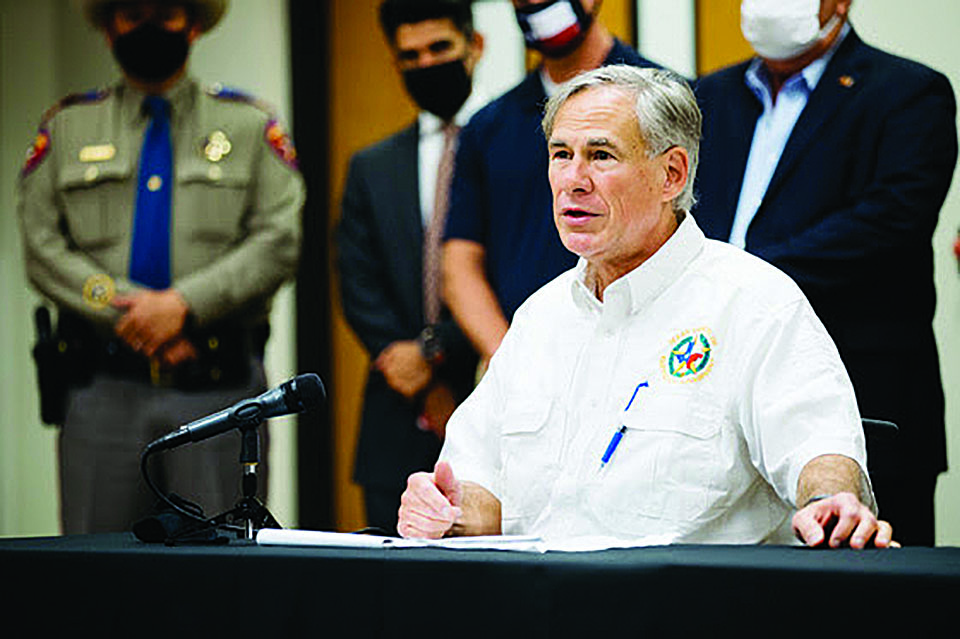 State Gov. Greg Abbott during a press conference in Weslaco to discuss the aftermath of Hurricane Hanna and announce more aid to the area Tuesday, July 28, 2020. Courtesy photo.

Prior to Abbott’s press conference, Hidalgo County commissioners held an emergency meeting with the county drainage district who announced that the floodwaters left behind by Hurricane Hanna will remain in the area for as long as week.

All 26 county pumps are spread out throughout the county to pump out water from the storm which left behind as much as 14 inches of water in several areas of the county.

The area hit hardest by the storm late Saturday and early Sunday was in Precinct 1, according to drainage district General Manager Raul Sesin.

“The district manages 51 % of our county, the storm greatly impacted our most populated areas,” Session said of the area that covers the mid-Valley. “We’re doing a lot of pumping into the floodway out of our main drains and we do have flow, we’re controlling it so we don’t flood our sister county so everything looks promising.”

“But that water is still making its way into the east side of the county, all our systems there are at capacity.” Sesin said.

The emergency meeting occurred as the county continues to assess the damage left behind by Hurricane Hanna, the first hurricane of the 2020 hurricane season which produced wind gusts of more than 90 miles per hour and several storms along its path, producing as much as five feet of floodwater in several areas.

The damage included flooded houses, damages to roofs of homes and several buildings and thousands without power across the counties of Starr and Hidalgo.

As part of the damage from the storm, more than 272,000 residents across the county were left without power. As of press time Thursday, power has yet to be restored to nearly 7,451 customers from AEP Texas and Magic Valley Electric Cooperative.

Both companies said in a statement power is projected to be fully restored to all customers by Saturday evening.

At the Tuesday emergency meeting, Precinct 3 Commissioner Jose “Joe” Flores remarked that he’s receiving calls from the cities of Peñitas, La Joya and Sullivan City that are seeing immense flooding in the area despite not being in a low-lying area of the Valley.

“We’re using the pumping trucks to clear that up, but that’s all we got,” Flores said.

Sesin added that the water is draining slowly due to the water systems in the area being at capacity.

“On the west side we’re seeing a lot of areas under water that took over 24 hours to clear. In 48 hours we’ll see a lot of our system start accommodating, but this one looks like it’ll take a little bit longer just because of the amount of water we’ve received,” Sesin said. “The water gates are fully open, that’s helped tremendously getting water out of our area but it’s going to take a little bit longer because of the amount of water we’ve seen in our system. We anticipate being at least another week or so of full blown open gates.”

Commissioners also approved a $300 cash relief program provided by the County Service Agency that would go toward expenses for vehicle repairs, clothing, food, cleaning products and other essential supplies.

“It’s a small token of assistance but given the magnitude and the large number of families who have been affected across the county, and given our budget constraints, this is a necessary step,” CSA Executive Director Jaime Longoria said. “We’re going to be prudent with these resources.”

Since the storm, the CSA has housed 30 families across the Valley in emergency shelters with many of them staying in hotels, Longoria said.

Due to the COVID-19 pandemic, however, the county had difficulty housing the evacuees because of a lack of hotel space.

“Sunday and Monday were very difficult to find hotel space. We were placing families from the West in hotels in McAllen, Edinburg, and looking for space as far east as Mercedes to put these families,” Longoria said, adding that several people from Sullivan City and Peñitas had to be rescued from their attics or vehicles.

“It’s a double whammy, we have people in hotels because of COVID, doctors and nurses from out of the area assisting, and families who self-evacuated. All of those things caused a confluence of issues for us even though we pre contracted some space prior to the weekend,“ Longoria said. “We’re running out of space.”

Gov. Abbott’s press conference occurred shortly after the county emergency meeting Tuesday. Abbott spent the hours prior to his press conference touring the Valley to assess the damage along with local and state officials.

In his visit, Abbott stressed the importance of helping an area that has already been ravaged by the COVID-19 pandemic.

“Flooding damage continues to plague people. The good news is there have been no loss of life reported,” Abbott said, even though Edinburg police reported earlier that day that four members of an Edinburg household perished after having a generator indoors after the hurricane. “Now the goal is to do the best possible to make an assessment on what the damages and needs are.”

To help the Valley recover from the storm, Abbott announced he was waving regulations regarding commercial trucking in the state meant to address power outages and deliver supplies to the area.

Abbott also discussed the severe flooding in the area and the expected “catastrophic” damage to local agriculture, but much of the press conference addressed COVID-19 cases in the area.

“It’s an enormous challenge for any local leader to step up and be able to address the challenges that come with a hurricane. It’s even more challenging when you couple that with a pandemic,” Abbott said. “Our biggest concern with the hurricane was the challenges it posed because of the pandemic. I want to emphasize this hurricane has not eliminated COVID-19. COVID-19 still exists in the Rio Grande valley. It can still be easily transmitted.”

To tackle the issue of hospital capacity in the area, Abbott announced that the McAllen Convention Center would be converted to a healthcare facility to house up to 250 patients recovering from COVID-19.

Medical professionals are also expected to be deployed to assist hospitals in Harlingen and Edinburg, Abbott said.

“This is on top of the more than 2,000 medical personnel that we have already allocated to this region to assist in the healthcare needs.” Abbott said. “Bottom line is this: the state of Texas will work with our federal and local partners and private entities to ensure the healthcare need of every person in the RGV will be met in response to COVID-19, Hurricane Hanna or any crisis they are dealing with.”

According to Nim Kidd, chief of the Texas Division of Emergency Management, there are over 6,100 contract nurses and doctors in the state already, some of whom are Department of Defense and Health and Human Services staff.

The governor also urged the public to continue following the state’s mask mandate and to avoid large gatherings to mitigate the spread of COVID-19, adding that several large cities outside the Valley have seen a decline in the number of new cases and hospitalizations since the governor made usage of wearing a face covering mandatory last month.

“We are seeing glimmers of positive results,” Abbott said. “We need a balance of making sure we’re not forcing people into bankruptcy so they can continue to buy food, pay rent like they need to while slowing the spread of the disease.  When a community is unable to provide hospitalization, more action needs to be taken. Now we have all these additional resources to alleviate the strain in the local healthcare region.”

Abbott also promised an additional round of surge testing for the Valley.

“Texas’ number one priority is COVID, we will put the medical resources here to ensure the needs of the community are fully met,” Abbott said.