Among the destruction seen in the wake of Hurricane Hanna over the weekend, more erosion was spotted along the riverbank where a three-mile stretch of a privately constructed border wall near Mission sits.

Construction of the border wall started along the riverbank of the Rio Grande River last December, causing the federal government and the neighboring  National Butterfly Center to file separate lawsuits against Tommy Fisher and his network of companies — Fisher Industries, Fisher Sand & Gravel Co. and TGR Construction — who constructed the border wall. 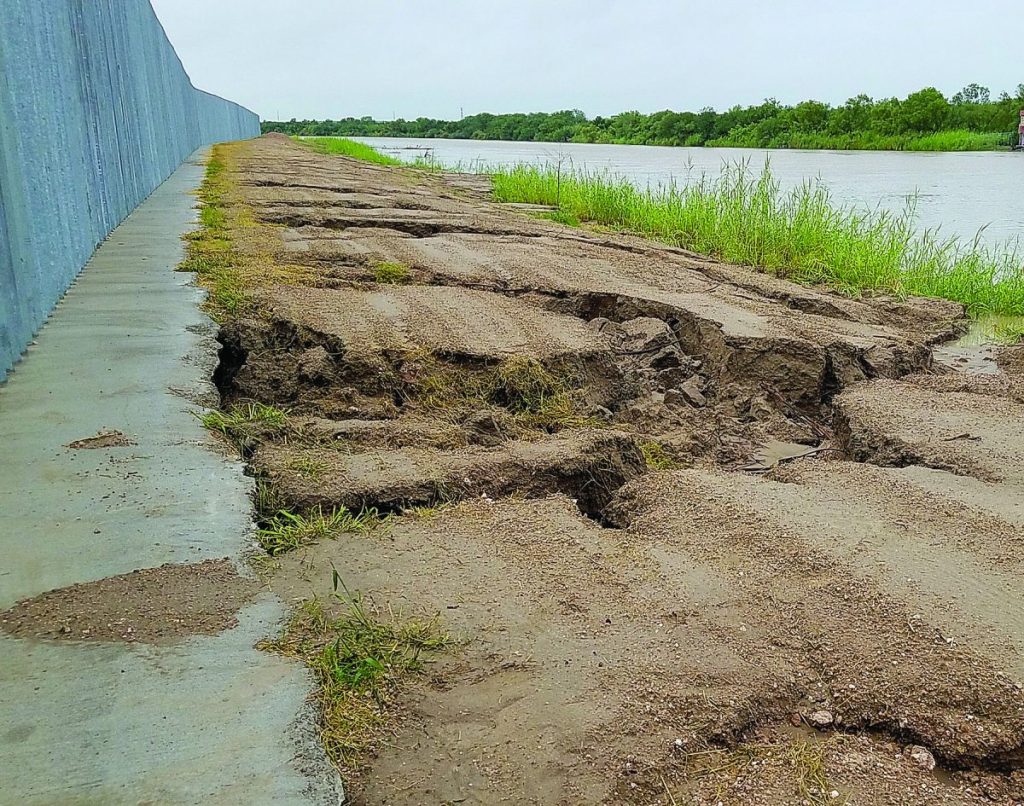 Erosion seen along the riverbank where a three-mile stretch of a privately constructed border wall near Mission sits. Courtesy image

The federal government argued that the border wall construction violates an international boundary treaty between the United States and Mexico while the NBC said in their lawsuit the border wall could destroy their neighboring property. The lawsuits have dragged on since then with the most recent status hearing earlier this month centering around multiple spots of erosion seen at the site of the border wall.

The erosion has since worsened due to Hurricane Hanna, according to Javier Peña, the attorney representing the butterfly center.

“If you get on a boat and travel further down past the Neuhaus property where this wall was constructed to a neighboring property, you will see the erosion is nowhere near as drastic as it is at the Neuhaus property,” Peña said. “Nature took hundreds and thousands of years to create these banks. And Fisher thought they could design something better than nature could and it didn’t last a weekend.”

The photographs, which were taken on Monday, showed damaged areas that Fisher Industries were trying to rectify erosion issues in following the July 2020 status hearing.

The status hearing was followed by President Donald J. Trump denouncing the border wall on Twitter.

“I disagreed with doing this very small (tiny) section of wall, in a tricky area, by a private group with raised money by ads,” Trump tweeted. “It was only done to make me look bad, and perhsps (sic) it now doesn’t even work. Should have been built like rest of Wall, 500 plus miles.”

U.S. District Judge Randy Crane, who has been presiding over the lawsuits, said in the July status hearing that it looked like the lawsuit with the federal government would be resolved as soon as Fisher Industries amended their erosion spots.

Peña said Wednesday the President’s recent remarks, along with the new damage to the border wall, could result in the federal government changing their views on the issue being resolved soon.

“This validates the issues in the lawsuit, those areas we photographed were places that were already eroding and repaired after orders from the federal government by Fisher the week before the hurricane hit,” Peña said. “Everything they had repaired was washed away in one day and the erosion got worse. How can we allow this structure to stay there when we know it will wash away?”

The hurricane delayed an inspection planned on the border wall to see the repairs to the erosions that have since worsened due to Hurricane Hanna, Peña said.

The erosions could create a new pathway for the river, meaning that the river would begin flowing on the American side of the Rio Grande, making that land Mexico’s as per the international treaty, Peña said.