When he first heard the idea of it, Joel Zamora Jr. was understandably taken aback by it.

Zamora Jr., the general manager of the Palmhurst location for Tropical Smoothie Cafe, was gearing up for the opening of his store with a week long series of deals and giveaways that would conclude with a red ribbon cutting ceremony, as most openings usually do. 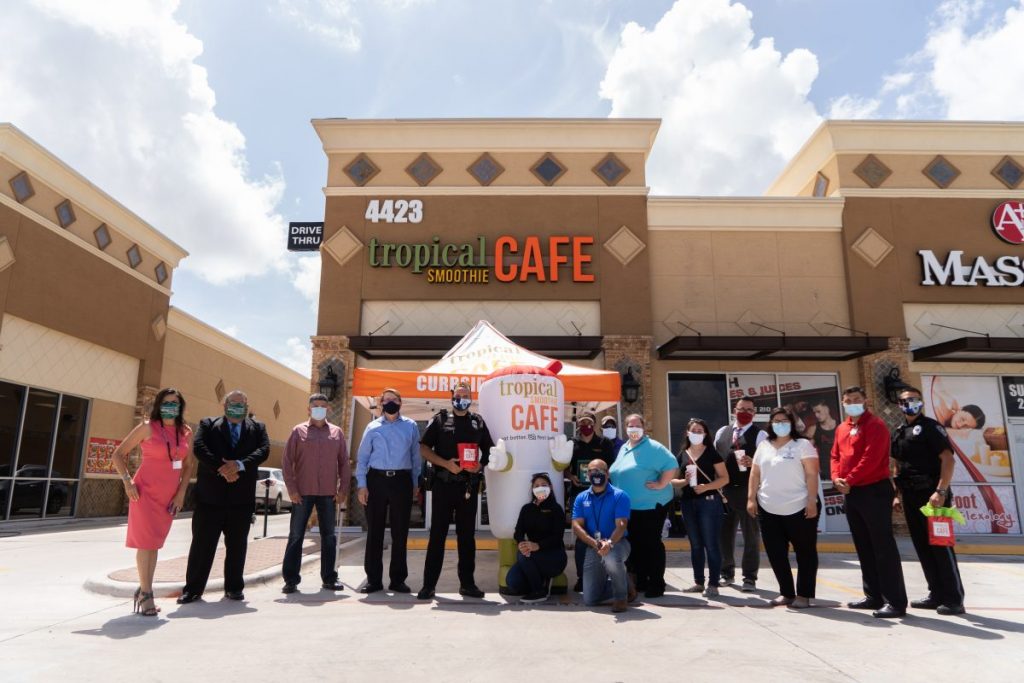 However, a company he had hired to do social media for his shop recommended that he ditch a traditional ceremony for the public and go virtual.

“At first I thought it wasn’t going to work,” Zamora Jr. admitted. “But when I started thinking about it more I realized it’d be smarter and safer for all those involved including my staff and guests. It would be something smart and easy to do in the middle of a pandemic instead of doing it in person.”

The opening ceremony, held Thursday, July 30, occurred through Zoom where members of the public could access it by logging on and viewing Zamora Jr. and his staff, as well as representatives of the city of Palmhurst and the McAllen Chamber of Commerce, who practiced social distancing and the usage of masks as they attended the ceremony.

Tropical Smoothie Cafe, located on 4423 N. Conway Ave. Suite 200, has a seating capacity of 12 people, Zamora Jr. said, explaining why it would be impossible to hold a public opening ceremony with social distance guidelines being followed.

Everyone attending wore masks and the cafe held two separate ceremonies that day for members of the McAllen Chamber of Commerce and representatives of the city of Palmhurst, respectively, to prevent a crowd from appearing at the ceremony.

“Our store is small to begin with so if everyone had shown up, we’d all be close together and not be able to practice social distancing and it would not have looked good,” Zamora Jr. said, adding that as far as he knows, his business is the first in the Valley to hold a virtual red-ribbon cutting ceremony.

“We were able to adapt so quickly and it’s cool to see,” the owner said. “In my experience in the fast food industry, a lot of the workers and managers are very young and used to being active on social media. We all have different virtual meeting spots we have access to such as Zoom, Facetime, Google Meets, they’re all tools we can utilize at this time. I hold my staff meetings through Google Meets and my staff loves it and are able to stay home and it’s very cool that we’re allowed to do that.”

For Zamora Jr., the ceremony was crucial to be shown publicly to show solidarity between governing entities and small businesses.

“It allowed everyone to see it wasn’t just us trying to get through the pandemic, it’s also the local government but by being with us it shows that they stand with businesses utilizing their own tools to get their own work done,” Zamora Jr. said. “It’s important to utilize these tools at this time not only for our safety but the safety of our workers, employees and the guests’ health which is of the utmost importance. Without the virtual red ribbon cutting, it would’ve been a little harder for us to show the city was behind us and supported us.”