No Friday night lights for Coyotes, Huskies and Lobos

It will be a quiet night across the Rio Grande Valley prep sports scene tonight as local high school teams continue to wait for the fall sports season to begin.

This weekend was originally scheduled to be the opening weekend of high school football contests for the schools of the Big 7 but all are still waiting to get back on the field due to the current state of the coronavirus pandemic. There hasn’t been a contest played by any school in the Big 7 since mid-March when the University Interscholastic League (UIL) at first postponed and then canceled all activities for the 2019-2020 school year. 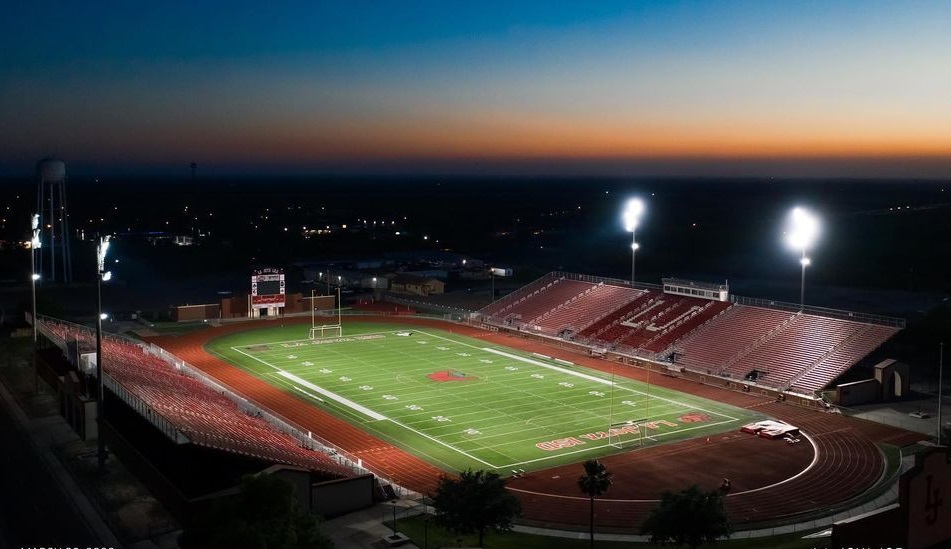 The situation is different across the state. The UIL granted permission this past July for smaller school districts (Class 1A – 4A) to begin practicing and holding contests for the fall sports (football, volleyball, team tennis, cross country) earlier this month. At the same time schools with higher enrollments (5A – 6A) were delayed from practicing until September 7. All of the teams from the Big 7 are either 5A or 6A schools.

There is also the matter of a Hidalgo County directive issued on July 14 that ordered all public and private schools in the county closed until after September 27. This order not only keeps students at home for the start of the school year much like they finished last spring, it also forbids any school activities for the same time period.

Both school district calendars and fall sports schedules for the schools of the Big 7 have had to be readjusted in response to both the UIL and Hidalgo county directives along with directives from the Texas Education Association (TEA) and decisions made by the individual districts.

The combination of the UIL calendar and the delayed opening of the schools to students have caused the schools of the Big 7 to condense their schedules. The UIL calendar includes the dates in which each of the fall sports must certify district results in determining who qualifies for the post season. Team tennis must be certified by October 24 and cross country by October 31, leaving the teams and athletes from these sports with little time to compete once their respective school decides to re-open.

Volleyball has a certification date of November 17 and football districts from the 5A and 6A level have until December 5; more time than the other two fall sports, but still not enough time to complete the usual number of games compared to previous years.

A combination of those factors has led one local district (La Joya ISD) to cancel their fall sports contests.
A decision by the La Joya ISD school board last week will keep schools closed to on campus instruction and activities until November 2. In a letter addressed to the La Joya ISD family August 20, La Joya ISD Superintendent of Schools, Dr. Gisela Saenz, cited the significant number of positive COVID-19 cases in Hidalgo County as the reason for the decision stating that, “The health, safety and well-being of our employees, students, and community remains the highest priority for La Joya ISD.”

This decision follows an earlier one in which La Joya ISD moved the opening of school from August 17 to September 8 for both safety reasons and to give time to further the development of the district’s on-line instructional program.

The most recent decision effectively ended the fall sports seasons for the schools of La Joya High, Juarez-Lincoln High and Palmview High. The new reopening date for the district comes after the UIL certification date set for cross country and does not leave enough time for the teams in the sports of volleyball and football to complete enough contests before their respective certification dates. La Joya ISD does not compete in team tennis.

The district made official acknowledgement of the cancellation in a press release this past Tuesday from the La Joya ISD Public Relations and Communications Office. The release stated that “in an effort to continue to safeguard the well-being of all our students, employees and community, La Joya ISD has collectively decided to cancel/postpone its participation in all extracurricular activities until November 2, 2020 due to COVID-19 pandemic”, and that “The decision was made after the COVID-19 District Crisis team received feedback from athletic staff, administration and parents.”

The district is not the only school in the state to make the decision to cancel their fall season. Earlier this month the Ben Bolt-Palito Blanco ISD canceled their fall season and last week the Southwest Preparatory Conference (SPC) did the same. The SPC consists of private schools from both Texas and Oklahoma.

The decision by La Joya will, of course, affect a number of other school districts including Mission CISD, whose two high schools were scheduled to face schools from La Joya in district play this fall.

In addition to Mission CISD, the decision by La Joya ISD will affect schools from Laredo down to Brownsville as well. Depending on the district and the sport, schools from La Joya were aligned with schools from those cities and many in between as part of the UIL district re-alignment last February.