For nearly the last two weeks, the children of Maria Isabel Hernandez – Maximiliano, Christopher and Luis Angel – have struggled to comfortably do their schoolwork at home.

“Our house isn’t a big place so they don’t have an area to do their stuff,” Hernandez said. “They’re either at the unstable kitchen table, using a dresser that’s too high, or seated at the low living room table. It’s uncomfortable for them.” 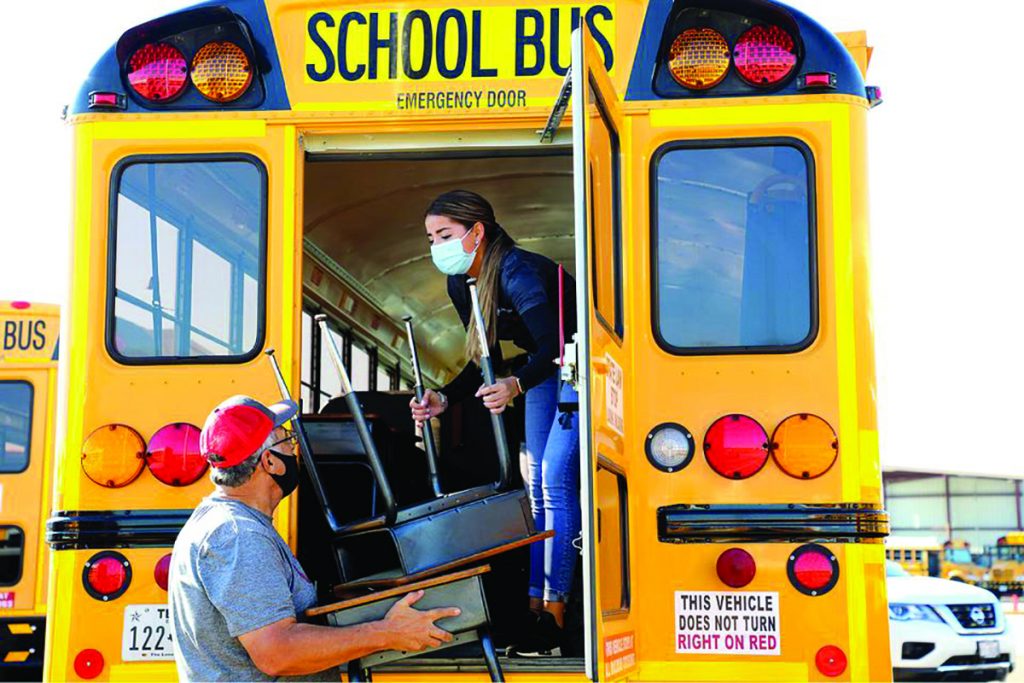 Hernandez’s children are with the Sharyland school district and, like many students across the country, are spending the first few weeks of the new school year at home as they attend online classes.

Like other fellow Sharyland students, Hernandez’s kids have Chromebooks and internet hotpots to help them attend classes virtually and, as of last week, a new tool to concentrate on their classes.

On Thursday, Aug. 27 Maximiliano, Christopher and Luis Angel were among the 80 students with the Sharyland school district who received a student desk and chair to have a space dedicated to do their class.

An additional 60 students in the district received desks and chairs on Tuesday.

“It made me happy, now the kids could concentrate better, sit correctly and feel like they’re in school,” Hernandez said of the desks. “Since they received the desks they’re happy with their own space to attend classes and aren’t uncomfortable.”

As the Sharyland ISD federal programs Director, Teresa Gonzalez said that sense of concentration and sense of comfort is one the district is striving for.

The program is responsible for district-wide strategic and campus planning and holding several educational programs for low-income families and children.

“In working with and talking with some of these parents, they shared the concern that none of us were ready,” Gonzalez said of the transition to online learning. “The families we talked to have limited resources and didn’t have certain things they needed for their children like a desk or space. It’s hard for them to find a desk or for them to afford one, let alone more than one for families with more than one child in school.”

According to Gonzalez, the district compiled a list of families with students in need of a desk by having campuses call families and ask if they’d like to request one. The desks families received came from the district.

“They came from classrooms or from storage so the district didn’t spend anything on this,” Gonzales said. “We’re letting them use the desks and chairs at home so they have a space to do the online learning, kind of like an extension of bringing the classroom to the home.”

According to Gonzales, families can choose to keep the desks for as long as their kids will learn from home.

“It’s a need we saw and did something about,” she said. “We’ve been providing Chromebooks, headphones and things like that but when you’re talking about having three or four kids at home and everyone going to class at the same time, it became a bit more challenging for families to get the students a space for school. This was a way to alleviate that challenge.”

As previously announced, should the district be allowed to reopen later this month, schools will transition from 100 percent virtual learning to The Parent Choice Plan. Under this plan, each family may choose whether their child learns on-campus or remotely for the remainder of the school year.

Preliminary results of a survey conducted by the district found that 30 percent of parents would want their children to return to on-campus learning.

“Depending on the status of the situation with the pandemic, I think I would send my kids to school,” Hernandez said. “I know they miss it and their teachers and friends and I do feel like they learn better in person, these desks are at least helping with that.”