The smell of buttered popcorn was so strong that it penetrated my cloth face mask and the face shield I was wearing as I entered the lobby of Cinemark’s Hollywood USA Theater Monday.

With that aroma, I was instantly transported to the before times-when I spent every weekend at the movie theater up until last March when COVID-19 made it impossible to do so. 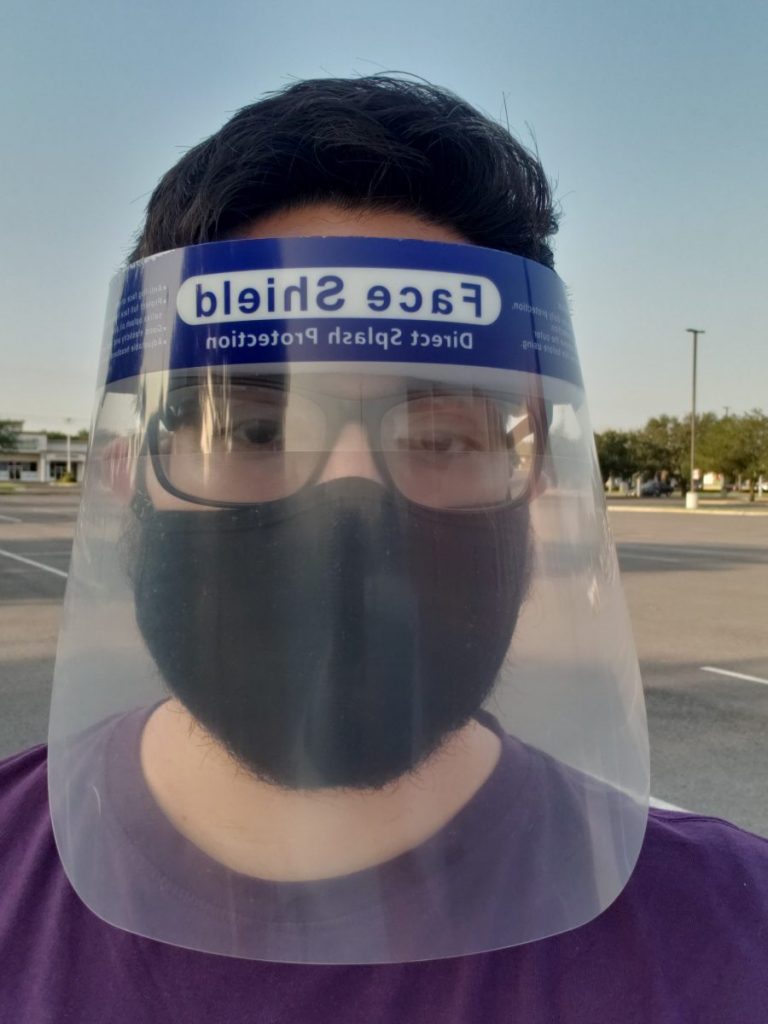 Last month, Cinemark and other theaters nationwide reopened to the public after closing their doors due to a global pandemic that made gathering with a large crowd-something theaters depend on-deadly.

Theaters reopened amid several health experts publicly saying going to one would be dangerous as the country saw a total of 6 million cases of the highly contagious disease that killed more than 184,000 people in the U.S.

I must admit to feeling safe at the movies due to many precautionary measures Cinemark announced it was taking once they reopened. Among them was a deep cleaning of every surface in the theater every 30 minutes, sanitizing every screening room before and after a showing and the mandatory usage of facial coverings unless you are eating or drinking something from the concession stand. I have to admit I never once felt uncomfortable wearing my face mask for nearly two hours.)

But the biggest safety feature was limiting the capacity of every screening room by blocking off every other aisle in the theater. Cinemark also encouraged moviegoers to purchase tickets and reserve your seats on their website or their app where I saw they blocked off the seats surrounding me, meaning that only 58 seats in my screening room with a capacity of 142 people were available.

Despite these measures, moviegoers may share the same trepidation health officials voiced considering that the box office has seen embarrassingly low numbers in the days following the reopening of theaters. Last weekend’s number one movie at the box office, for example, was Marvel’s “The New Mutants,” an $85M entry in the popular X-Men movie franchise. It made $7 million in its first three days of release.

That same enthusiasm was one I encountered when I went to the movies and saw that the parking lot had only 13 other cars in front of the theater, a visual that clashed with the notion of theaters being packed every summer.

When I entered the theater lobby, I was stunned at how different it looked. Prior to its March closing, Hollywood USA installed a bar at the concession stand that is now closed to prevent a crowd from forming at the concession stand. The nearby arcade, usually bustling under the sound of games and kids and adults playing them as they waited for their showing, had yellow tape blocking its entrance.

With the exception of a giant poster for Disney’s “Onward,” there weren’t any posters or other kinds of ads for movies. In their place were posters promoting social distancing and hygiene practices such as washing your hands.

When I approached the concession stand to get my online ticket scanned, I asked the manager behind the plastic divider if many people had been coming to the theater. Despite the face mask he was wearing, I could tell he had a disappointed expression at how business was going.

After getting my ticket scanned, I headed to my empty screening of “Dirty Dancing,” passing by several hand sanitizing stations along the way and the kiosks containing disinfecting wipes to use on your theater seats. It was an odd sight that reminded me of how even in a movie theater that’s supposed to distract you from the real world, we can’t escape it. 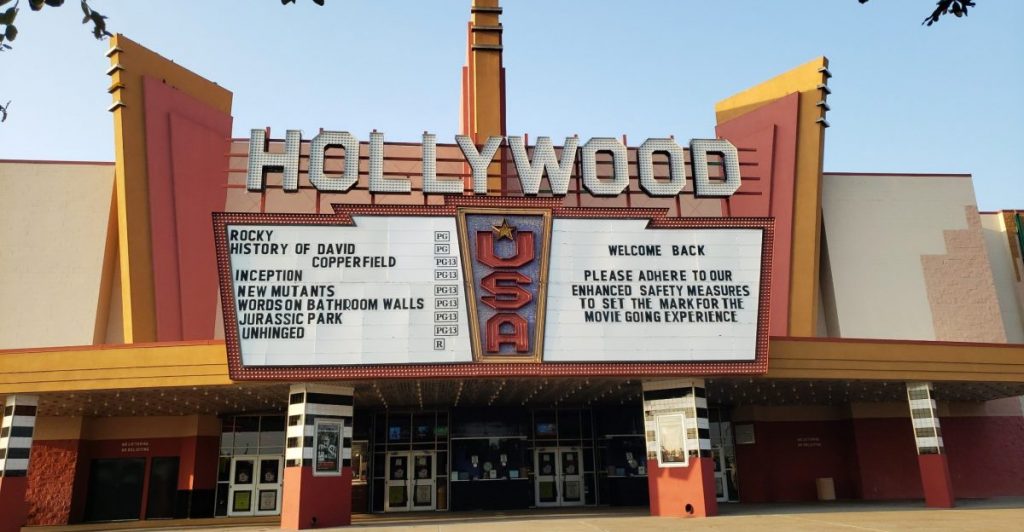 So why did I decide to go? Frankly, I missed the movies. For me, the theater was a nice break from the craziness in the real world where for up to two hours or more, I was seated in the dark with a large crowd. Though many of us were strangers, we connected with a story we were enjoying on the big screen under the influence of overpriced snacks from the theater concessions stand.

The last film I saw was “The Invisible Man” with my mom on Tuesday, March 10. This was nearly a week before Hidalgo County Judge Richard F. Cortez issued a Disaster Declaration in response to an increase of COVID-19 cases in other parts of the state. Movie theaters nationwide closed the following Wednesday and the county would then report its first confirmed case of COVID-19 the following Sunday.

At the time, movie studios began delaying their movies by up to a year, citing COVID-19 safety concerns. I expressed annoyance at this, falsely believing that the disease wouldn’t spread everywhere and that it’d be clear by the summer. Instead, the county is seeing nearly 28,000 cases of the novel coronavirus and 1,185 deaths.

After months of stress from working during a pandemic, I needed a break, and the movie theater was the only solution.

Given how “Dirty Dancing” is a perfect movie that I’ve never seen in theaters, of course I had to see it on the big screen, and it made me realize that we should not be at the movies at this time.

Don’t get me wrong, seeing “Dirty Dancing” again was fantastic, but it hits differently in the midst of a pandemic. Remember that scene when Baby sneaks into a party and sees everyone on the dance floor dancing erotically? Baby’s reaction is a mixture of joy at what she’s seeing, and stunned surprise at seeing something she knows she shouldn’t be witnessing.

Prior to 2020, that scene felt like a cute fish out of water moment where we are amused at how out of place Baby is on the dance floor. Watching it in an empty theater, I shared Baby’s surprise at seeing so many people in one place together doing an activity in a public area that we haven’t been able to do for months. Even though I don’t regularly dance (I’m the kind of guy you see on the dance floor awkwardly shuffling around with a drink in each hand) I suddenly missed that activity.

One of the strengths of “Dirty Dancing” is how joyous of a movie it is, but scenes such as that one filled me with melancholy at how I was reminded of the sort of activities we can no longer do. If we continue to go to the movies without the mass distribution of a vaccine, I imagine other moviegoers will have that same feeling every time they watch a scene of anyone going about their day without worrying about the novel coronavirus.

Despite seeing it as a motivation for going to the movies, I suddenly realized how much of a deterrence the limited seating at the theater served for the movie going experience. Movies are meant to be seen with a large crowd where their reactions to what’s happening onscreen can be just as wonderful as what you’re seeing on there.

I was the only one at my screening for “Dirty Dancing.” There was no one there to cheer with me when Patrick Swayze said his iconic “Nobody puts Baby in a corner” line or when he and Jennifer Grey performed their iconic lift at the climax of the movie. These were moments that demand reactions from a loud audience that we can’t have anymore due to us having to stay away from large crowds.

Obviously some people reading this will be giddy at the thought of COVID-19 making movie theaters empty meaning they can potentially enjoy a movie without a loud crowd, but I love large crowds. Yes other moviegoers can be obnoxious and rowdy, but some of my favorite movie going experiences involve seeing large crowds share the same awe I am experiencing as we all watch a great movie where we burst into spontaneous laughter, gasps and on occasions, silence.

Clearly we can’t go back into engaging with large crowds until a vaccine is distributed, and who knows how long that will take? Besides next spring’s “F9,” there’s no upcoming theatrical release I’d consider risking getting infected with COVID-19 to see.

Until we can go back to safely meeting with other people in a large crowd, I see no point in going to the movies. For now, I will continue to stream movies at home, and wait for the WesMer Drive-In Theater to reopen.