The beep of a metal detector at the entrance of the Sharyland Alternative Education Center was accompanied by an alert from a newly installed temperature walkthrough scanner.

The aforementioned beep echoed through the hallways of the campus, seemingly replacing the sound of a busy hallway teeming with students and teachers on their way to class. This was a sight the Sharyland school district has not seen in their campuses since prior to Spring Break last March when the spread of the COVID-19 virus forced school districts to close its doors to the public-until now. 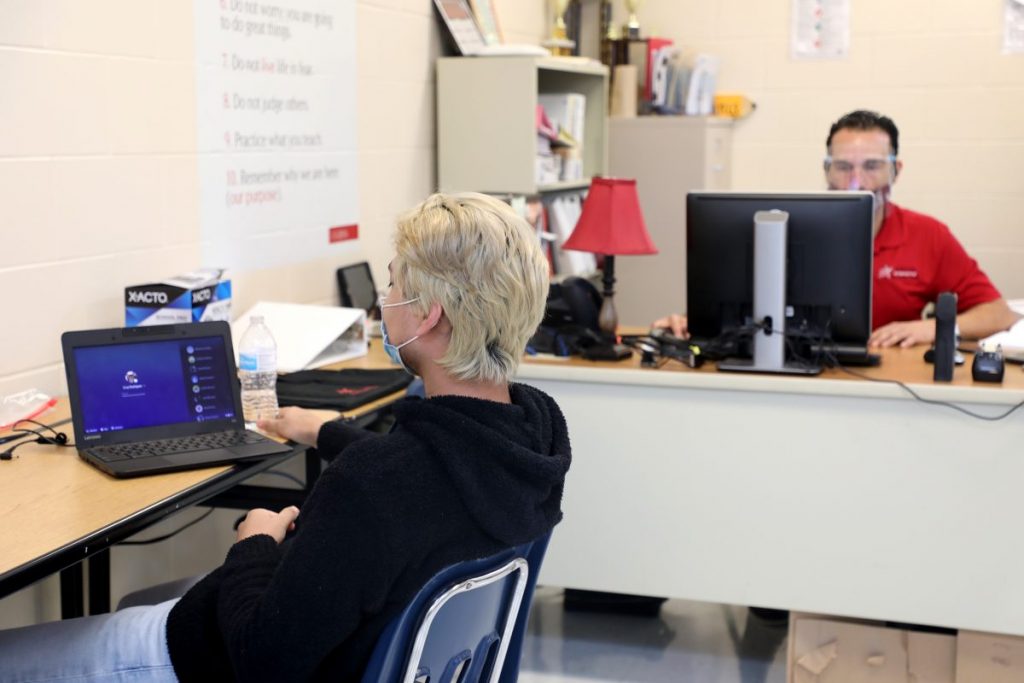 On Monday, the Sharyland Alternative Education center reopened its doors to students whose parents chose to let their children return to campus.

The reopening was announced during a school board meeting last week which district Superintendent Dr. Maria M. Vidaurri said is part of a requirement with the Texas Education Agency that districts must comply if they are to reopen for the public on their 8th week of school.

“It’s a transition period that requires having some students and staff on campus for in-person learning during the transition period of the new school year after the first four weeks of mandatory remote learning,” Vidaurri explained. “We have an at risk population of students that’s a smaller group compared to other campuses that will be able to social distance and a lot of them were already asking for more internet access because of the programs they use and the devices at home weren’t being fully utilized. This would help them with that.”

The campus reopened with several safety measures in places such as the temperature walkthrough scanner- which is one of the more than 50 scanners purchased by the Sharyland school district over the summer to be placed at the entrances of every district building to monitor the temperatures of everyone walking into the building.

Visitors and staff members are also subject to a virtual health screening prior to entering the building, staff members are given PPE such as masks and face shields to wear at all times, a requirement students must also comply unless they are at their lunch break.

Students must have lunch at their desks and have desk dividers placed on top of them while they eat and posters reminding people to social distance are placed in several areas throughout the building.

According to Sharyland AEC Principal Tizoc Silva, the campus had an enrollment of 70 students prior to Spring Break. The campus services high school students with disciplinary problems and students in an Options program to receive credits necessary for high school graduation. The campus is staffed with six teachers and four other staff members where due to social distancing measures, each classroom could only hold a maximum of six students.

On Monday morning, only two students in the campus’ Options program showed up.

“Students of course have the option of whether or not they want to come back,” Silva said. “I have kids of my own and see the need for face-to-face instruction while following safety protocols. We have students wanting to come in and they’ve struggled with the bandwidth at home. These are kids who struggle without hands-on learning, I was excited we were allowed to offer this.”

“I had one student in the spring who could not connect to the internet at home no matter what he did, he ended up missing six weeks of classes because of it,” Ho-Shing said. “Here, you have a captive audience who will not miss class or be late to the next period.”

Melendez pointed out that despite a decrease in the amount of new COVID-19 cases, people should not let their guard down.

“We’ve had three weeks of downward trending of our numbers,” Dr. Melendez said. “We’re optimistic because we see things trending in the right way and seeing more people pay attention but there’s still room for improvement. All of us as we drive daily can see a lack of compliance in social distancing. We still have the highest mortality rate in the state, the second most active amount of COVID-19 cases in the state, we have people in the double digits dying every day and hundreds of people remain in the hospitals. This is not the time to let your guard down. We did that after May 1 and we saw the astronomical results from it.”

Sharyland’s reopening date is set for Tuesday, Oct. 13 and parents have the option of continuing remote learning or letting their child go back to campus.

“We’re going to do everything to ensure we are following protocols and remain open for as safe as possible,” Vidaurri said.