That’s right Mission Veterans football fans, your beloved Patriots are back on the practice field getting ready to play under the Friday (or Thursday) night lights once again! And if you’re wondering whether or not Coach David Gilpin is excited about it, all you have to do to find out is follow him on Twitter.

Take this Tweet for example which Gilpin posted Sept. 28, “Greatest days of my life: **Our marriage and birth of our children. **Birth of our grandchildren. **College graduation. **Hired as head coach at Mission Vets. **Winning to advance to 4th round of playoffs. **TODAY, BEING BACK ON THE FB FIELD WITH OUR PLAYERS AND COACHES!!!!!!!!!!” 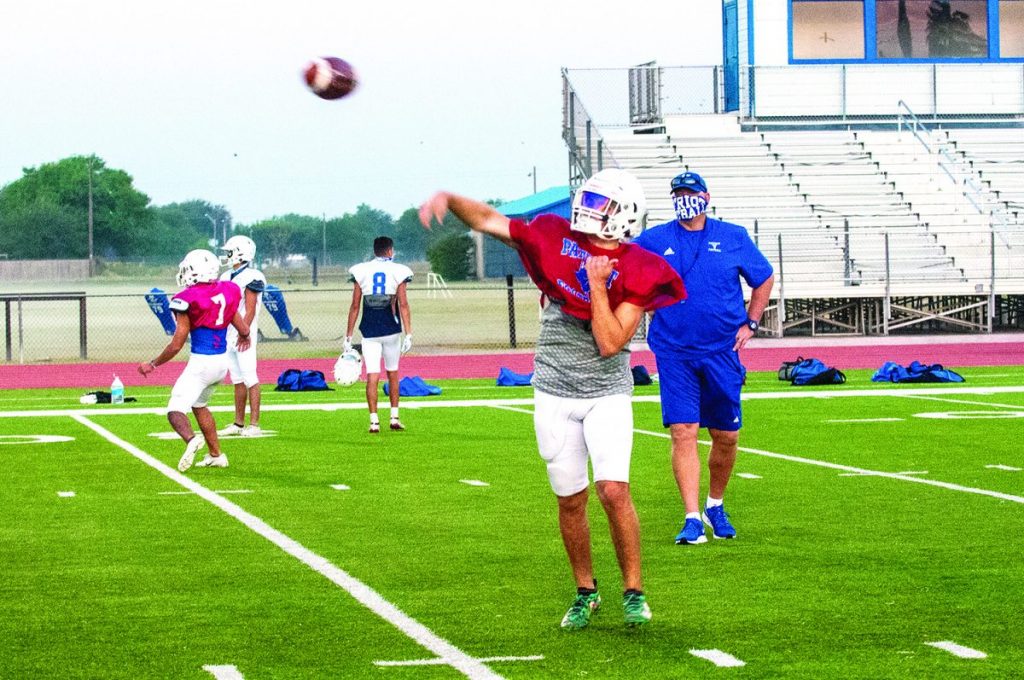 If you’ll notice which one of those events on the greatest days of his life list he put in all caps and added multiple exclamation marks to, you should get a pretty good idea about how excited he is about the upcoming 2020 football season. And why not? With the possibility of Mission CISD fall sports being cancelled due to the COVID-19 pandemic still fresh in his mind, having the opportunity to coach again means more to him than it ever has.

“I’ve said this before, we use the term ‘excited’ too much,” Gilpin said. “But the bottom line is, we’re excited. I’m excited. I AM excited! There were uncertain times. There were times that we just didn’t know if we were ever going to get out of there. We saw the rest of the state starting to open up and starting to play and still there was the question of what was going to happen here in the Valley.”

While the term ‘excited’ does apply very well to how Gilpin is feeling about having his team back out on the practice field, there is another term that applies to how he’s feeling just as much, and that term is ‘grateful.’

“We’re grateful to our administration because they’re the ones that allowed us to do it,” Gilpin said. “Mission CISD administration allowed us the opportunity for fall sports; volleyball, cross-country, tennis, everybody. But we’re talking about football, and I’m grateful that our administration has faith in our coaches and our players, and our boys. I just could not be happier for our boys, and especially for our seniors, that they’re getting this opportunity because if they don’t get to play football this year, by and large their football careers are over.”

Coming off a season in which the Patriots experienced an extremely uncharacteristic early exit from the state playoffs, when they fell to Corpus Christi Veterans in the first round, Gilpin’s boys still managed to have a much more successful season than many expected them to have in 2019.

“Yes, it (losing in the first round of the playoffs) was disappointing,” Gilpin said. “But there’s still a sense of satisfaction in what we did last year. Nobody thought we could do it again. We lost so many kids last year but there we were again with an 8-2 record. We took a disappointing loss to Mission and then we lost on the last play of the game to Palmview. That was it going into the playoffs.”

Speaking of losing players, the Patriots have no returning starters on defense this season and only three on offense. One of those three returning starters on offense is senior wide receiver Jason Barrera who shared what it means to him to be getting ready to play football once again when he said, “I’m just grateful that we are going to get to play. There was a time that we didn’t know if we were going to play or not. And with this being my senior year, my last year in high school, I was really hoping for it. And I’m really glad that we have a season.”

On the defensive side of the ball for the Patriots, senior safety Michael Pena did get some playing time last year, but this year he is officially a starter. With this past off-season being like no other he, or any of his teammates have ever experienced, Pena shared how preparing for this season has been very different.

The Patriots will be opening their 2020 season next Friday with a non-district game at Raymondville. Their 16-5A-2 opener will be at Richard Thompson Stadium against the Sharyland Rattlers Friday, Oct. 30. Other than a possible play-in game to determine post-season seeding, the only other two district games they will be playing this year will both be at home; Friday, Nov. 13 against the Diamondbacks and Friday, Nov. 27 against Roma.