There are times in sports when one play or one game creates a rallying cry for a team’s future. The 2019 Sharyland Pioneer Diamondbacks football team was partially fueled by the way their 2018 season ended; a one point loss to Port Lavaca Calhoun in the first round of the playoffs.

Last years’ Diamondbacks squad used that experience to reach new heights. The team lost their season opener and then went on a tear: eleven straight wins before falling to Boerne Champion 45-38 in overtime at the Alamodome in San Antonio in the Class 5A Div. II Region IV semifinals. 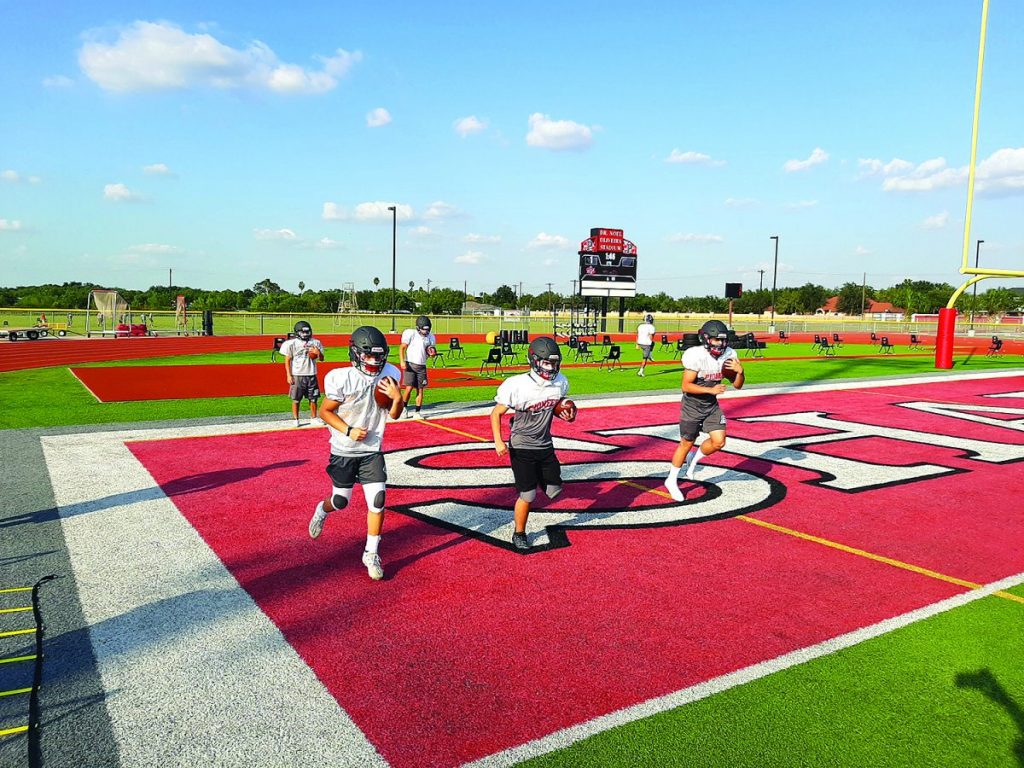 The 2020 squad is using the acronym “FTF” (Finish the Fight) as it begins preparations for the new season. “The FTF is something we came up with as a staff and as a group of kids to kind of get motivated,” said Head Coach Tom Lee.  “Because we really felt like we didn’t finish (in 2019) what we wanted to start. We just wanted to make sure to have that as our motto to always kind of remember as we go into games and to finish things all the way through.”

This year’s squad has the people to make it happen. The big one is, of course, quarterback Eddie Lee Marburger.  The senior directed an offense that scored 35 or more points in all but one game last year, doing it by finding his receivers with accurate throws or tucking the ball away and picking up yardage via the run when other options closed down. Marburger’s efforts got him named the District 16-5A Div. II Most Valuable Player, the Texas Sportswriters Association (TSWA) 5A All-State Second Team and recognition as the Class 5A Cover Boy for 2020 in Dave Campbell’s Texas Football, the definitive source for all things football in the state.

“Win a state championship; that’s the goal,” said Marburger when asked about the expectations for this season.  He went on to comment how the success of last year is already paying dividends this season. “It’s carrying over big time; just the energy in practice and the fun we have in practice is cool. Overall I’m excited for this team.”

Marburger will be supported on offense by All-District First Team members Tristan Castillo (running back) and Gavin De La Garza (receiver). Both are seniors. In addition, offensive lineman Lauro Roman (senior) made the All-District Second Team.

The delayed start to the season and the University Interscholastic League’s (UIL) biennial realignment will give this season a different look for everyone. The Diamondbacks are scheduled to play eight games in 2020, opening the season Friday October 16 at home against McAllen Rowe, followed by another home game against McAllen Memorial in week two. Both opponents were playoff qualifiers last year in Class 6A.

The big part of the season comes next. The amended UIL calendar and the local decisions to delay the return to athletics for the schools of the Valley led the coaches of District 16-5A Div. II to divide the district into zones for 2020. Pioneer is part of the District’s West Zone along with Roma, Sharyland and Mission Veterans. The results of those three games, which make up games three, four and five on the Diamondbacks’ schedule, will determine who in the district’s East Zone Pioneer will face in the last regular season game of the year December 4. The results of that game and other games that day will determine the District 16-5A Div. II district champion along with the other playoff qualifiers for 2020.

Besides Pioneer, West Zone opponents Sharyland and Mission Veterans were both playoff teams last year as were East Zone members Edcouch-Elsa and Mercedes. That makes five teams who made the postseason last year from their respective district. (Mission Veterans was a member of District 16-5A Div. I) UIL rules specify that only four teams from a district qualify for the playoffs.

“Getting broke up into two zones; it’s going to be a dog fight,” said Lee. “It’s three quality teams (Pioneer, Sharyland, Veterans) and then you throw in Roma in the mix which is an up and coming, improving program. Every game we have (in the West Zone) . . . there’s no room for error.”

If the Diamondbacks are able to survive their zone foes, an East Zone team will be waiting for them in December.

“Edcouch and Mercedes are perennial top programs,” added Lee. “If we’re lucky enough to get to have a play-in game with one of them, then it’s going to be another tough challenge.”