Coming off a very successful 2019 District 30-6A season, the Mission Eagles are ready to pick up where they left off last year. With a 6-1 district record, Coach Koy Detmer’s squad finished in a three-way tie for first place with PSJA and McAllen Memorial in 2019. While a bi-district round loss to Laredo United did bring the Eagles most successful season under Detmer thus far to a rather disappointing finish, it was the second year in a row that Mission compiled a winning record and qualified for the state playoffs. After five straight losing seasons, back-to-back winning seasons and playoff appearances are signs that the winning tradition, that has long been synonymous with Mission Eagles football, is back at Mission High.

While the COVID-19 pandemic has brought many changes to the way high school football teams across the state are preparing for, and will be playing, their 2020 seasons, what looked to be a casualty of the drastic rescheduling both Mission teams had to do, won’t be a casualty after all. That’s because it was announced earlier this week that the Battle of Conway game between the Eagles and the Mission Veterans Patriots, is back on. 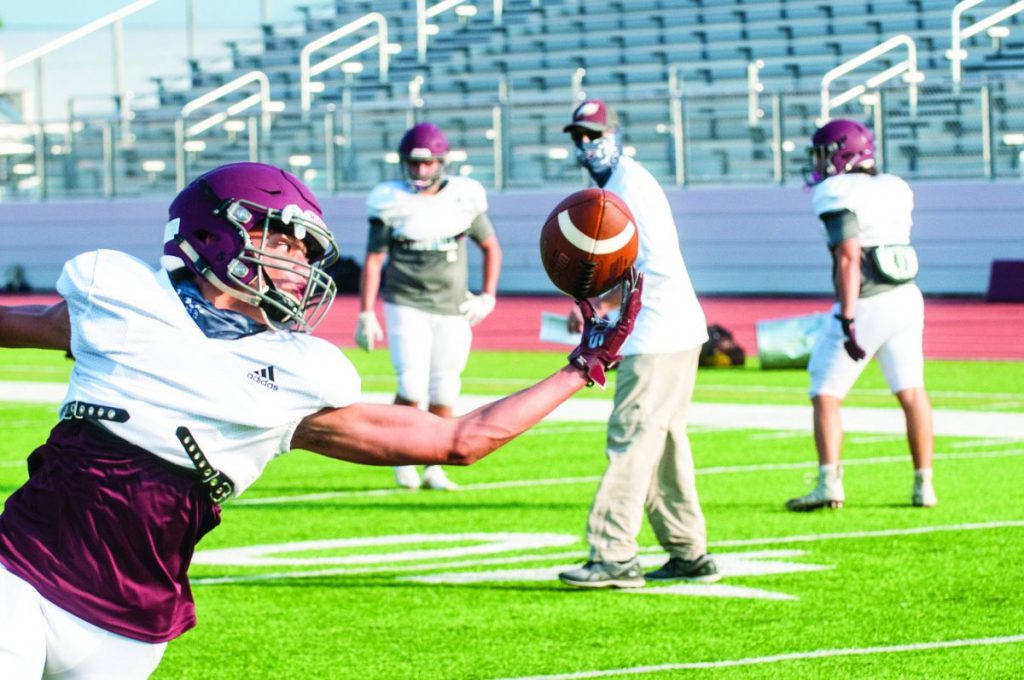 “There was a little change in Veterans’ schedule involving their game against McAllen Memorial that resulted in the Patriots having a bye on Nov. 20,” Detmer said. “We also had a bye on that date so it worked out perfectly that we’re going to be able to play that game and it’s awesome. It’s a great thing for both schools, the players, the parents and the community. Everybody’s fired up because we were thinking that we weren’t going to get to play that game this year.”

As for the 2020 version of the Eagles, Detmer has a lot of experience returning on both sides of the ball.

“On defense we have nine starters returning while on offense we have four to five players that started or at least rotated in last year,” Detmer said. “So we have a lot of guys returning defensively and we’re excited about that. Those guys are getting after it and looking very good right now. Offensively we have a real good nucleus of guys coming back. Having a quarterback return is always a plus, so hopefully we can keep working at it and have a successful season.”

That quarterback is junior Jeremy Duran who is about as experienced as a high school quarterback in his junior year can be. That is because not only is he returning for his second full season as the Eagles’ starting quarterback, but he actually started some games as a freshman.

“The Eagles have a winning tradition and that’s what we’ve done these past two years,” Duran said. “It’s always good to be under Coach Detmer. He’s an NFL guy that knows the position well and there’s been a lot of knowledge given to me by him.”

Eagles’ outside linebacker Justin Soto is in his senior season as well. Having the opportunity to put on the pads and helmet and get out onto the gridiron once again means a chance to improve on what he and his teammates accomplished the past two seasons.

“It feels good because when I came in as a freshman our team was struggling,” Soto said. “My sophomore year we went 8-3, we went to the first round of the playoffs and I even got defensive newcomer of the year. My junior year I tore my shoulder but I still played. However, I felt disappointed about not being able to achieve more as a team than we did the year before. This year I’m healthy and I hope to be able to bring more to the table for the team and help us advance deeper into the playoffs.”

As a result of the late start, the Eagles 2020 season will be shorter than the usual 10 game season. As a matter of fact, with the exception of the Battle of Conway game, all of Mission’s games will be against District 31-6A opponents starting with a home game against the Edinburg Bobcats next Friday followed by games against PSJA, Edinburg Vela, Edinburg North, Mission Veterans, PSJA North and Edinburg Economedes.