The Sharyland Pioneer football team showed few ill effects of the long layoff and short preparation time given to them as they opened the 2020 season with a 49 – 28 victory over McAllen Rowe Friday night at Richard Thompson Stadium in Mission.

Fans of the Diamondbacks have become accustomed to seeing their team put up big points week after week in the past few seasons and their 2020 debut was more of the same. 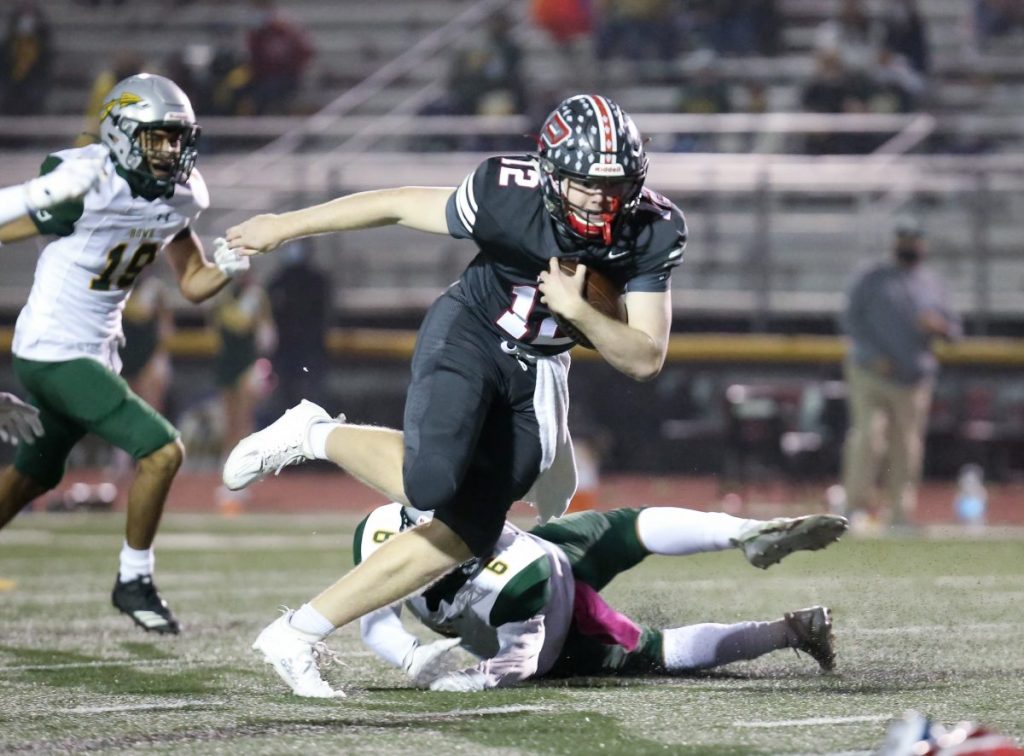 The Diamondbacks scored three touchdowns in the third quarter, one more each from Marburger and Graham Jr. along with Tristan Castillo’s 60 yard score on a pass from Marburger to keep Rowe from getting back in the game despite three second half scores of their own. Photo by: Mario Magallon

The Diamondbacks scored on their first three possessions to jump on the visiting Warriors. Joseph Graham Jr. opened the scoring with a 9 yard reception from Eddie Lee Marburger and Gavin De La Garza’s 19 yard catch of another Marburger toss made it 14-0. Taylor Esparza’s 4 yard run made it 21-0 early in the second quarter and Marburger ran in another from 11 yards out to make it 28 -0 before Rowe scored late in the quarter to make it 28-7 at the half. Mike Ramos Jr. converted all four extra point attempts.

The Pioneer defensive unit was contributing as well, keeping the Warriors off the scoreboard on their first six possessions. Isaac Rivera had an interception that led to the Esparza score and another Rowe possession was snuffed out on a sack from Jay Palacios and a big third down hit from Caleb Fuentes.

Pioneer opened the second half with a long kick return from Tristan Castillo and scored on their first play from scrimmage after the return when Marburger ran it in from 13 yards out, the first of three third quarter scores. Graham Jr. scored his second touchdown of the night on a 3 yard pass from Marburger that along with a two point conversion on a pass from Marburger to Castillo pushed the lead to 42-13. Pioneer closed out their scoring barrage when Marburger found Castillo for a 60 yard score and Ramos Jr. added another extra point.

“Offensively tonight we played really well,” said Diamondbacks Head Coach Tom Lee. “We got a lot of those guys back from last year; so it’s real nice to have. Plus having the quarterback (Marburger) back there that understands what we want to do and puts us in good situations.”

“We’ve got a lot of preparation to do next week; playing McAllen Memorial on a short week,” added Lee. “But we’re excited just to be out here playing football right now.”

The Diamondbacks (1 – 0), play host to McAllen Memorial next Thursday October 22 at 7 pm at Richard Thompson Stadium.

“They’re (Memorial) going to run the ball, we know that,” said Lee. “But they’ve got to try and stop us too. We just got some things we have to clean up and we’ll get it done.”