La Joya school board trustee Claudia Ochoa said she plans to contest a citation given to her by Peñitas Police over the weekend for campaigning in her designated area near the city library.

The Peñitas Public Library has served as the polling place for the area since early voting started last week and thus far drawn nearly 1,900 voters, and concerns that were brought to the attention of the Hidalgo County Elections Department. 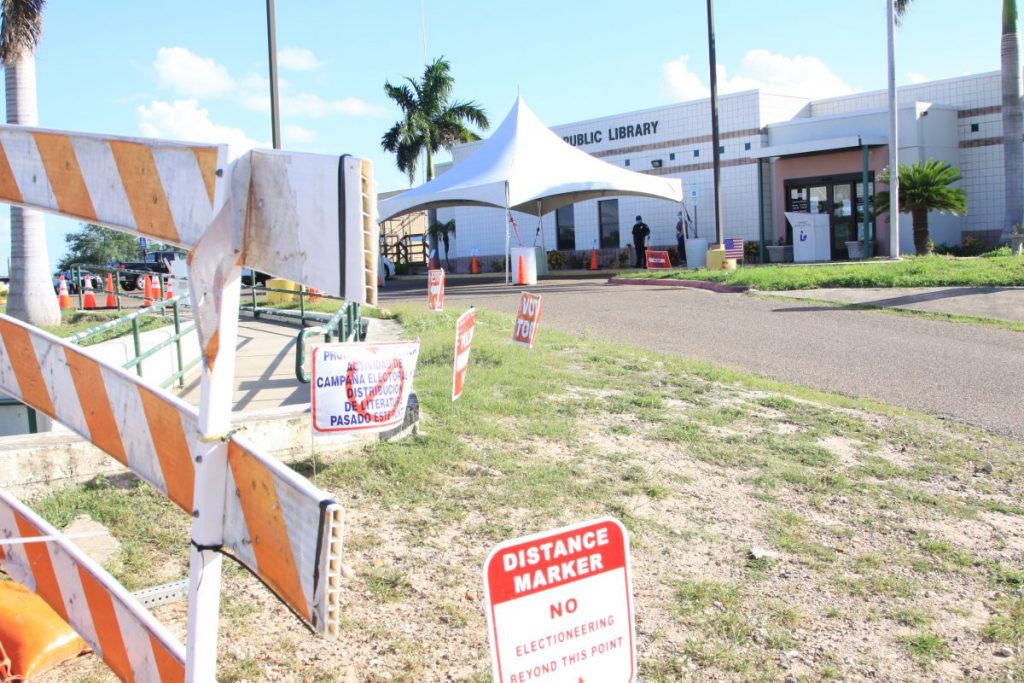 The Penitas Public Library which is being used as the city’s polling location.

Like other designated polling areas, it is against the state’s election code if someone campaigns or supports a candidate or political party within 100 feet of the location’s entrance. However, due to the library’s location along the city’s main street, many candidates such as Ochoa have found it difficult to campaign there.

“This polling site is on the highway so it doesn’t allow for adequate parking for voters, parties to electioneer or tents to protect our supporters from the heat, we’ve requested this location to be moved,” Ochoa said. “My tent is now located in a private property the owner allowed and other candidates have to request permission from property owners to have tents on their property because otherwise we can’t fit in the sidewalk.”

Lack of space led to Ochoa receiving a citation by Peñitas Police on Saturday for having political signs on the city’s right of way, or the shoulder lane in the street.

Two other members of Ochoa’s campaign team received citations over the weekend on charges Ochoa said are minor.

“I was the only candidate who received a citation when I was surrounded by others who weren’t scrutinized like this,” Ochoa said. “Every day the rules here in Peñitas have been changing on how we can campaign. One day we were told we couldn’t campaign anywhere near the library so I was actually at the corner of Main Street and the Expressway along with other candidates. Then we were told we could be close to it as long as we didn’t have signage, on another day we were told by the city we could only be on the west side of the polling location. I feel it is an abuse of power and I feel personally attacked by the police, city administration and mayor.”

According to Caso, the city is enforcing a law that was put into effect in 1997 by the Texas Department of Transportation that states no political material or people can be on the right of way, which is property owned by TxDot, not the city.

“The city doesn’t dispute those people have a right to be there but they cannot be on the right of way,” Caso said, adding that TxDot expects the city to enforce the law under the state transportation code. “There are people alleging they’re being targeted but all I can tell you is that’s not the case, anyone violating the law is susceptible to being charged by the city.”

The city has handed out a handful of citations to people on the ROW, Caso said. Among those were an individual who tore from the ground an orange safety fence placed by the city to prevent electioneering in that area. That person was cited for destruction of city property, Caso said.

“You can see as many as 500 political signs there along the street. It’s hazardous, that’s TxDot property so those placing the signs and tents and chairs there are breaking the law,” Caso said. “The ROW is narrow, so if you’re cramming tents, posters and people there, you’re not having the social distance that the city wants to maintain.”

Fueling concerns is the fact that city Mayor Rodrigo “Rigo” Lopez is camped out in a tent directly across from the driveway to the library. Though his tent is well past the 100-foot marker, it’s also the one closest to the library.

Ochoa is running as part of a slate made up of school board member Alex Cantu, Palmview City Commissioner Anthony Uresti and speech pathologist Irma Villarreal-Veloz. Their slate opposes the one the mayor is campaigning for. 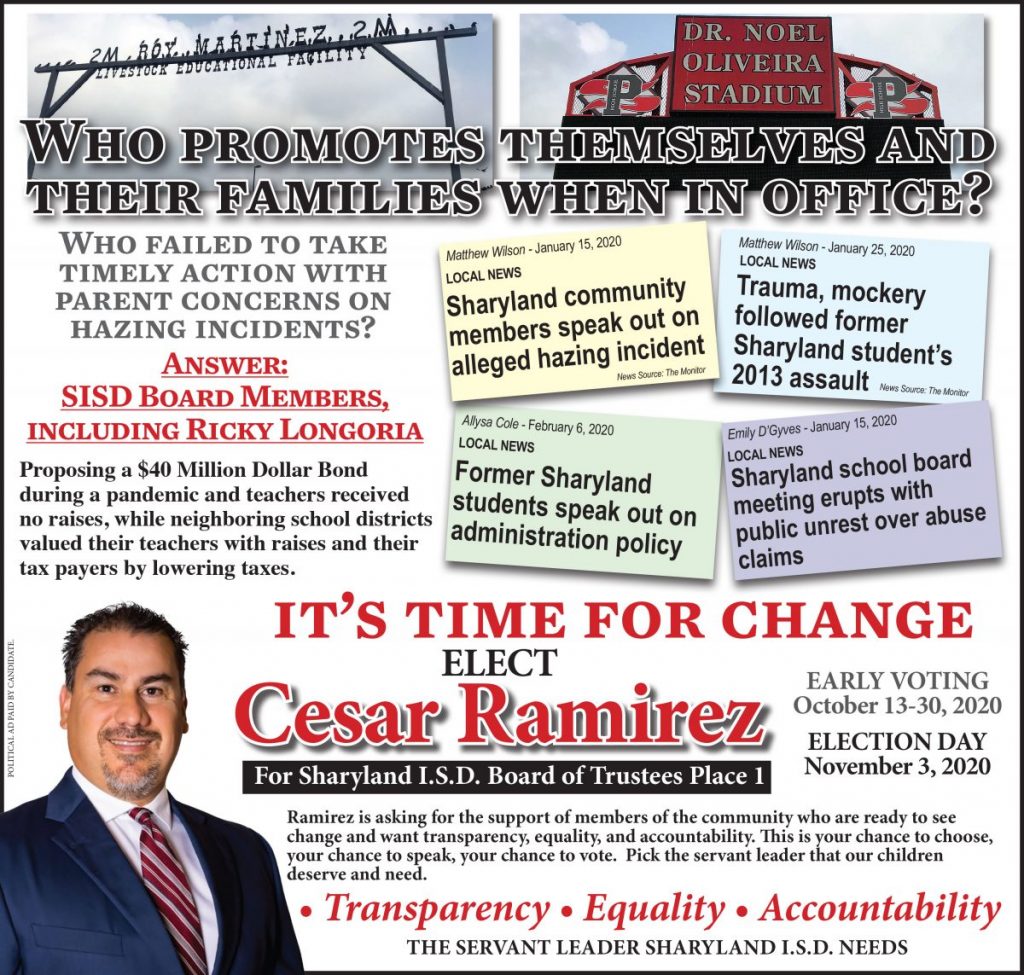 “Everybody has a right to support whoever they want but he should not be using his power to target individuals who are not supporting his slate,” Ochoa said of the mayor, adding that she’ll continue to campaign in Penitas. “I’m not intimidated, I am standing up for all candidates on the ballot because this administration is using their power to intimidate and harass voters.”

Mayor Lopez however, argued that his presence near the Penitas Library encourages people to vote instead of intimidating them.

“We’re all free to support who we want but I am here to encourage [voters] to come out and answer any questions they might have about the candidates. It’s not to sway them in any way but I encourage them to vote,” Lopez said, adding that the Penitas polling location is seeing a higher voter turnout than in the 2016 Presidential election. “as a mayor, I’d like to participate to show that I’m involved in the election process and encourage everyone to come out and have their voices heard.”

Lopez said the citations issued and orders given out by the city on electioneering locations is to protect the public and maintain social distancing.

“A lot of people aren’t following the rules and we’re trying to protect the public and educate them that they can’t be there because if an accident happens, we do not want to be liable for that.” Lopez said. “But at this point, they’re there at their own risk and I hope they understand the severity if something happens, it’s on them. People breaking the law will be dealt with, we expect our PD to enforce the law.”

When reached for comment, Hidalgo County Elections Department Analyst Hilda Salinas said Monday officials with the department visited the location over the weekend after receiving numerous complaints about the location.

“All policies are in place according to the state’s election code and it’s running smoothly,” Salinas said of the location. “The 100-foot marker was clearly marked and it’s the city’s jurisdiction from then on what happens.”

Ochoa expressed disappointment at the visit by the county elections department.

“We weren’t informed this was happening or invited to participate in any way,” Ochoa said, adding that she requested deputies with the county sheriff’s office to patrol the area. “I am not requesting special treatment, I am requesting things be done fairly in the city.”