Samantha Garcia said she is a known procrastinator, but she is not letting that stand in the way of her voting early.

The Edinburg native is one of the 115,460 Hidalgo County voters who have taken part in early voting since it started last week as of press time Thursday morning. She was one of the 1,435 people in line at the Lark Community Center in McAllen last Friday to vote. 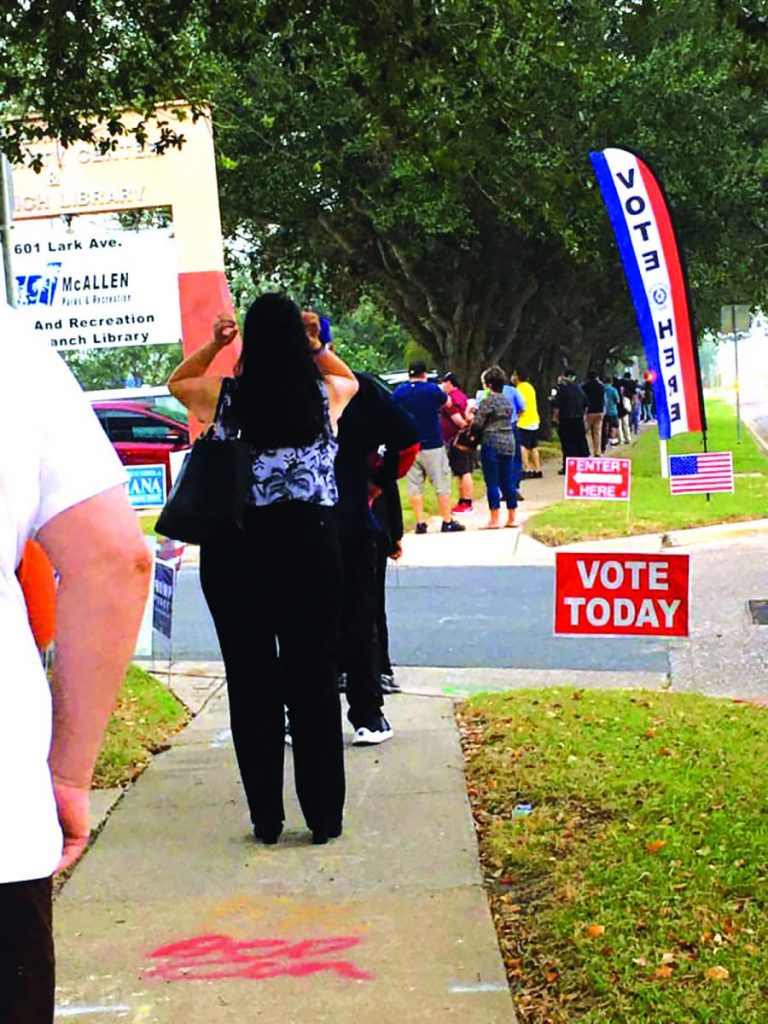 The line of people waiting to vote outside the Lark Community Center in McAllen Tuesday, Oct. 13, 2020. Courtesy photo.

“I’ve already made my decision on who I’m voting for so why not cast my vote early,” Garcia said “By voting early I avoid all the commotion with having to go vote on Election Day or being worried about an absentee ballot and leave with a sense of knowing I secured my vote early.”

This election season is different from previous elections. For one thing, early voting has been extended to run for 18 days instead of the usual week and a half to give more people an opportunity to vote early to avoid the Election Day crowd.

“Those are numbers we expect to surpass this election season,” Ramon said. “We’re very satisfied with the increase in registered voters but we know the amount of registered voters won’t matter if only half of them turn out to the polls. But with 18 days of early voting and every day consistently having more early voters than it did four years ago, we’re hoping to build up that momentum and have it continue throughout early voting.”

Ramon said she hopes the county soon breaks the 400,000 registered voter mark, which would be a record high under her watch as election administrator for the last 13 years.

With an additional 24 races on the ballot due to a delay in the May 2020 elections, Ramon said now more than ever is the perfect time for voters to be informed.

“Besides the presidential, state and county races you have everything from additional cities, school boards and water districts,” Ramon said. “We’re trying to get voters informed before they show up for the polls since the long ballot and the lack of straight ticket voting this year, it will take people a long time to vote. If the first time you see your ballot is right on the polling location, you are one of the people holding up the line.”

Voters in western Hidalgo County can pick up a copy of the Progress Times’ Voter Guide at 1217 N. Conway Ave. for a look at the candidates in the local ballots. The Hidalgo County elections website also has sample ballots available for voters to study at hidalgocounty.us/elections.

After voting, Garcia admitted to regretting not studying her ballot earlier.

“I only knew of the Presidential race so I was stumped when I saw the other races on my ballot,” Garcia said. “I do think these local races are important, but I just didn’t do my research when I should’ve done more investigation into who is running but I was not prepared for this. I just figured nothing was more important than the Presidential race.”

McAllen resident Jorge Gonzalez, who was also in line and voted shortly after Garcia, said that it was important for him to study each of the candidates and which one of them stood for the same values he does.

“My father always told me, ‘don’t vote for party lines, study the candidates and make sure they stand for what you do,” Gonzalez recalled. “I usually vote during early voting, it’s our civil duty and it’s the time to show up and make our vote.”