The Mission Eagles football team opened their 2020 season with an emphatic 51-7 victory over the Edinburg Bobcats Friday night at Tom Landry Stadium in the District 31-6A opener for both teams.

Eagle’s linebacker Jude Jaime tackled Bobcat’s quarterback Rolando Abrego for a two yard loss on the first play from scrimmage, setting the tone for the rest of the night. The Eagles defensive unit returned nine starters from last year’s squad and the group wasted little time in showing they will be a force to be reckoned with all season. Edinburg’s first four possessions resulted in four three and outs and four punts. It was the second quarter before they got a first down and took a snap in Mission territory. 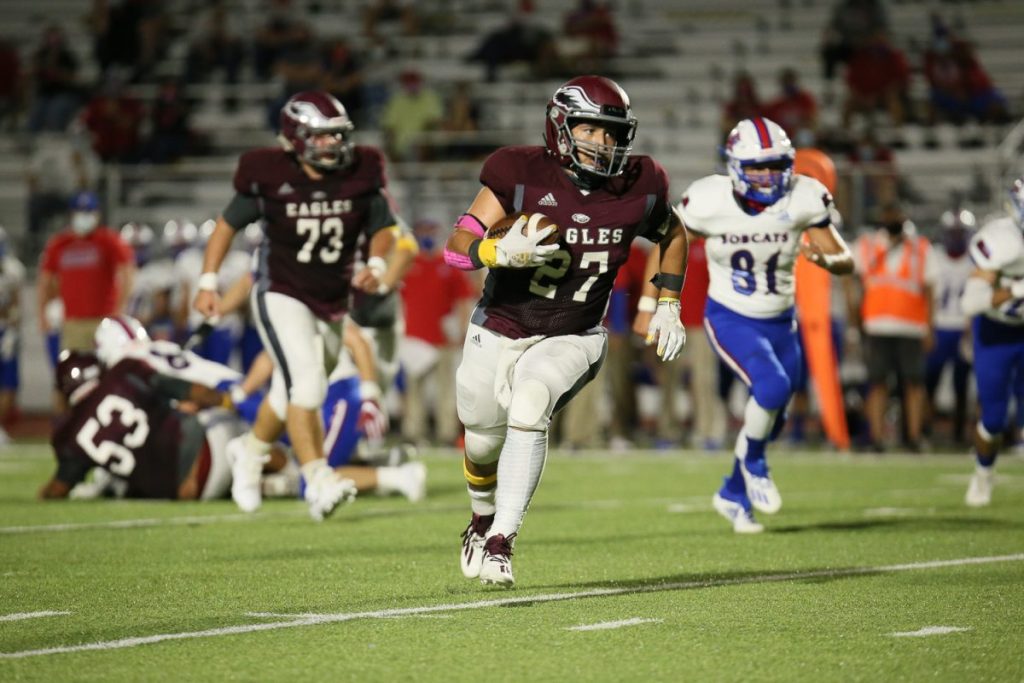 Mission Eagles Linebacker, Aven Alonzo, breaks away for a 1st down to help lead the Eagles to a win over Edinburg Bobcats Friday, Oct. 23, 2020.. Photo by Mario Magallon

By that time it was 28-0 Eagles who, unlike their opponent, moved the ball at will and took advantage of great field position. 18 of the Eagles’ first 23 plays started on Edinburg’s half of the field. Jeremy Duran connected with Tajh Jones for a 39 yard pass and run on the offense’s first play of the night and the Eagles were up 7-0 when Damian Cortez ran it in from 1 yard out a short time later. Cortez made it 14-0 with a 29 yard run and Jeremy Duran followed with two touchdown passes to help build the big early lead. Jose Ortiz caught the first from 10 yards out and Jose Cortez’s 31 yard catch, early in the second quarter accounted for the second. Luis Silva connected on his first four extra point attempts and pushed the lead to 31 – 0 with a 27 yard field goal. Andrew Maldonado’s 17 yard run made it 37-0 at the half.

The Eagles wasted little time extending the lead after halftime. Duran found Damian Cortez out in the flat for a short completion that turned into a 75 yard touchdown as Cortez raced down the sideline. Justin Duran connected with Gilberto Bernal on a 29 yard touchdown in the fourth quarter that, after another Silva kick, completed the scoring for the night for the Eagles.

Overall, Jeremy Duran had three touchdown passes and finished the night completing passes to seven different receivers. Damian Cortez scored three times for the Eagles with his two early runs and the big play to open the second half.

“I thought we did a lot of really good things”, said Mission coach Koy Detmer. “I thought we came out really ready to play.”

Detmer gave a lot of credit to both his offensive and defensive lines for their play on the night. “Anytime you can win up front is a big deal.

The way his players came back from their long layoff was noticed by Detmer as well. “I thought they did a good job of working through the pandemic part of things; the shutdown. A lot of guys came back in really good condition and ready to go.”

Those early plays were certainly evidence of that, but Detmer also realizes that it is still early in the season. “We saw good things from all the guys; now we got to clean it up and go build on it and be better the next week.”

The Eagles (1-0) travel to PSJA next Thursday night for their next district contest. Kickoff is scheduled for 7 pm.