Officer Adrian Guerra bid his faithful partner Roxy farewell this week, but it was not a goodbye – it was a “see you later.”

On Tues. Oct. 20, in the Mission Police Department Courtyard, a memorial service was held for Police K9 Roxy, who served the department for seven years. K9 law enforcement officers and units from McAllen, Edinburg and Hidalgo County gathered with the Mission PD to mourn her and celebrate her service to the city. 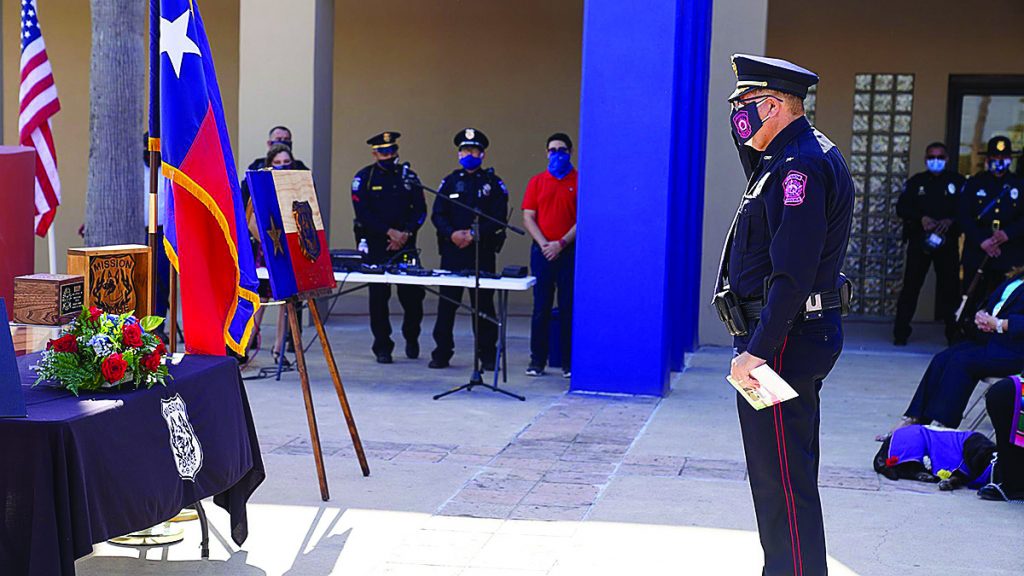 Roxy passed away unexpectedly on Oct. 3, 2020 from a stomach ailment according to a press release from the city. On her way to the veterinary hospital, she was saluted by Mission police officers.

Guerra served as Roxy’s handler; prior to that, she served with Officer Charles Lopez. At first, she was all teeth and no holds barred – until she met Guerra.

“Day by day, week by week, month by month and year by year our bond grew strong,” Guerra said. “By showing her discipline, love and some affection, she knew who her dad was.”

He recalled one of their first busts as a team – Roxy and Guerra were called to work with the U.S. Immigration and Customs Enforcement (ICE) and inspected a Volkswagen Jetta. She indicated there was something suspicious about the middle console area. When the vehicle was inspected, and the middle console was opened, approximately eight bricks of methamphetamine were found.

“Roxy was always on point in finding narcotics,” Guerra said. “After that day I praised Roxy for doing an outstanding and great job. We did get more busts after that, but that one will always be in my memory of Roxy.”

Father Roy Snipes of Our Lady of Guadalupe Catholic Church brought along his own dog Charlotte, who usually attends church services and funerals with the priest. Snipes said a couple of prayers during the service, noting that God speaks to everyone through animals like Roxy, and fellow human beings.

“We are more grateful and amazed than ever for the blessing of this noble and wonderful four-legged guardian angel,” Snipes said, sprinkling Roxy’s ashes with Holy Water from the Rio Grande River. “She delighted and blessed our hearts, and she protected us while she was here.”

Several city officials were also present to pay their respects to Roxy, including Mayor Armando O’caña and City Manager Randy Perez. O’caña spoke about his own dog, Snowball, who remained loyal and true without hesitation.

“I still remember those times when I used to be able to pick up the ball, throw it as hard as I could, and [Snowball] would go, retrieve it and bring it back, ready for the next round,” O’caña said, adding this exemplified the loving, faithful qualities of dogs. “Keep in mind she [Roxy] was an officer of the law. She also served our community. May Roxy rest in peace.”

“These are difficult times,” Perez said. “We’re here to memorialize and honor the legacy of K9 Officer Roxy, as she served and protected our community and our officers. She definitely will be missed as part of our city of Mission family, and we will continue to honor her legacy.”

Corporal Alexandria Leal, who was recently promoted to K9 Supervisor, mourned the loss of her own K9 partner Cezar in March 2019. She spoke about the deep bond Roxy and Guerra had throughout their time as a unit.

“Getting to see Officer Adrian Guerra work with Roxy was really a privilege,” Leal said. “They just meshed together perfectly, they made a great team. It was to the point that he could take her off the leash and she could search, and she wouldn’t stray away because that bond was so strong.”

Leal said that the connection between Guerra and Roxy was rare. She noted that the success of the Mission PD K9 Division is thanks to the fact that every officer who is part of it puts their everything into the job.

Mission police Chief Robert Dominguez said the loss of a beloved K9 is felt throughout the department, as they are a powerful presence of discipline and love.

“She wasn’t just a dog – she was a partner, she was a friend, she was part of the family – our family here at the Mission Police Department,” Dominguez said. “I see our K9 handlers get attached to these beautiful animals when they work together every day. If you notice around the Rio Grande Valley, most of our officers ride alone, solo in their police cars. Our K9 officers have their partner with them all the time. That bond that they forge together is so important for them and their families at home.”

“On the other side of the line was this young man, a strong police officer, who had obviously been crying. He continued to cry with me on the phone,” Dominguez said. “That’s how much it hurts when you lose a loved one – that’s who Roxy was to Adrian.”

When Guerra made his remarks at the service, it was clear the loss of Roxy is still resonating deeply in his heart.

“We worked as a team – finding narcotics, doing bitework and tracking suspects and missing persons,” Guerra said. “Roxy was a hardworking canine, and I know we would use her as a tool, but she was more than a tool. She was family. She was my girl, and I was her man.”

Following the blessing of Roxy’s ashes, she was saluted one by one by law enforcement and K9 officers. Music was played in her memory.

“Until we meet again at the rainbow bridge, I’m going to miss you Roxy,” Guerra said. “Rest in peace, girl.”