If the first two games of the year are any indication, opponents of the Mission Eagles football team better come ready to play this year. For two weeks in a row, the Eagles have combined a crushing defense and an explosive offense; taking early leads en route to big victories to open the 2020 season.

Their latest victim was the PSJA Bears Thursday night at PSJA Stadium in Pharr. The Eagles 30 – 0 victory has the team out of the gate with a 2 – 0 record for the year , and more importantly, a 1 – 0 start to the zone schedule that District 31-6A switched to earlier this week. 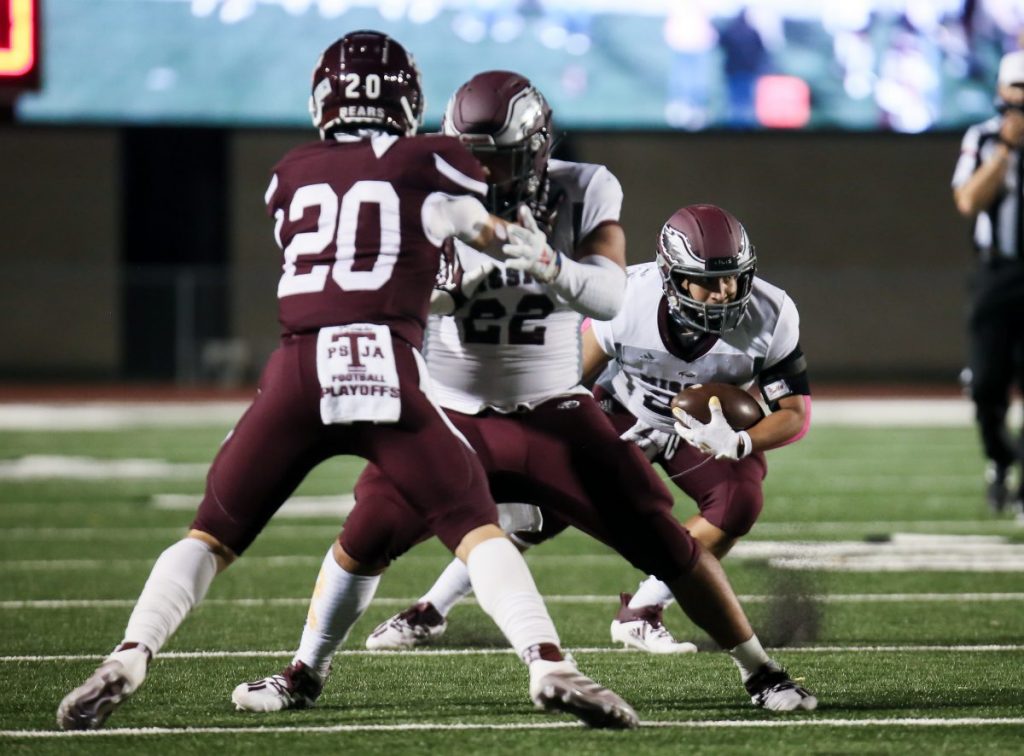 The defense made it tough for the Bears to get anything going throughout the night. Damian Cortez and Maldonado carried the load for the Eagles rushing attack, each recording double digit attempts on the night Thursday, Oct. 29, 2020. Progress Times photo by Mario Magallon.

Luis Balderas pounced on a loose football to stop the Bears (0 – 2, 0 – 1)) on their opening drive and the Eagles were up 7 – 0 a short time later after a four yard run from Andrew Maldonado. Balderas recovered another Bears fumble three plays later, setting up a short field that helped extend the Eagles lead to 14 – 0 after a 12 yard touchdown pass from Jeremy Duran to Gilberto Bernal. Luis Silva converted on both of his extra point attempts after those scores.

The Eagles were stopped on their next two possessions, once on downs and the second on a turnover that gave the Bears excellent field position deep in Eagles territory. A defensive stand along with a missed field goal attempt kept the Bears off the board and they never threatened again.

The Eagles were stopped on their first possession of the second half but got the ball back two plays later when Jose Tovar secured the defense’s third takeaway of the night with a diving interception. Duran hit Jose Cortez for an 18 yard score five plays after the pick, that along with another Silva extra point, made it 24 – 0. After the next Bears possession was stopped, the Eagles made it 30 – 0 with a one yard run from Duran.

The defense made it tough for the Bears to get anything going throughout the night, getting pressure up front from the likes of lineman Dante Lopez and linebackers Jude Jaime and Justin Soto. They added a fourth takeaway on a Luis Briseno interception near the end of the third quarter.

Their efforts did not go unnoticed by Mission head coach Koy Detmer. “This (PSJA) is a high powered offense; a very difficult offense to shutout,” said Detmer. “To go out there and do the job that our defense did was outstanding.” In addition Detmer was pleased to see them keep the Bears from capitalizing off that early turnover.

Detmer also liked how his offense responded after being kept out of the end zone for the entire second quarter and that first possession of the second half.

“We hit a little lull,” said Detmer. “We had some routine plays that we didn’t make.”

Detmer said making those plays was a part of his halftime talk with the offense. “We kind of put it on the offensive line that we were going to come out and be downhill in the second half and run play action and do our little thing like that and the guys fell right into it and did a great job of executing that in the second half.”

Duran paced the offense, completing 21 passes to seven different receivers. Tajh Jones caught five for 75 yards while Cortez had four receptions for 51 yards. Many of the team’s receivers are getting their first big taste of varsity football and their progress has pleased the fifth year head coach. “Those guys are really starting to really come on and be big time playmakers on the perimeter.” Besides Jones and Cortez, Detmer also praised Bernal and tight end Jose Ortiz.

Whenever Duran wasn’t throwing the ball, Damian Cortez and Maldonado were carrying the load for the Eagles rushing attack. Each recorded double digit attempts on the night.

After an off week, Mission is scheduled to return to action when they host PSJA North on November 12.