Diamondbacks on a mission to make history

Coming off the most successful season in Sharyland Pioneer High School history, the Diamondbacks football team has set the bar extremely high if they plan on exceeding last year’s success this year. But that is not a problem as Coach Tommy Lee and his boys are planning on not only raising that bar higher, but raising it as high as it will go, state championship high.

With only one game under their belts so far this season, talking about winning a state championship may seem a bit premature to some, or possibly even to most. However, setting such a lofty goal, and achieving something no Valley team has achieved in decades, is not a pipe dream for this group of extremely talented young men. Most of whom remember all too well how close they came last year to the state quarterfinals. 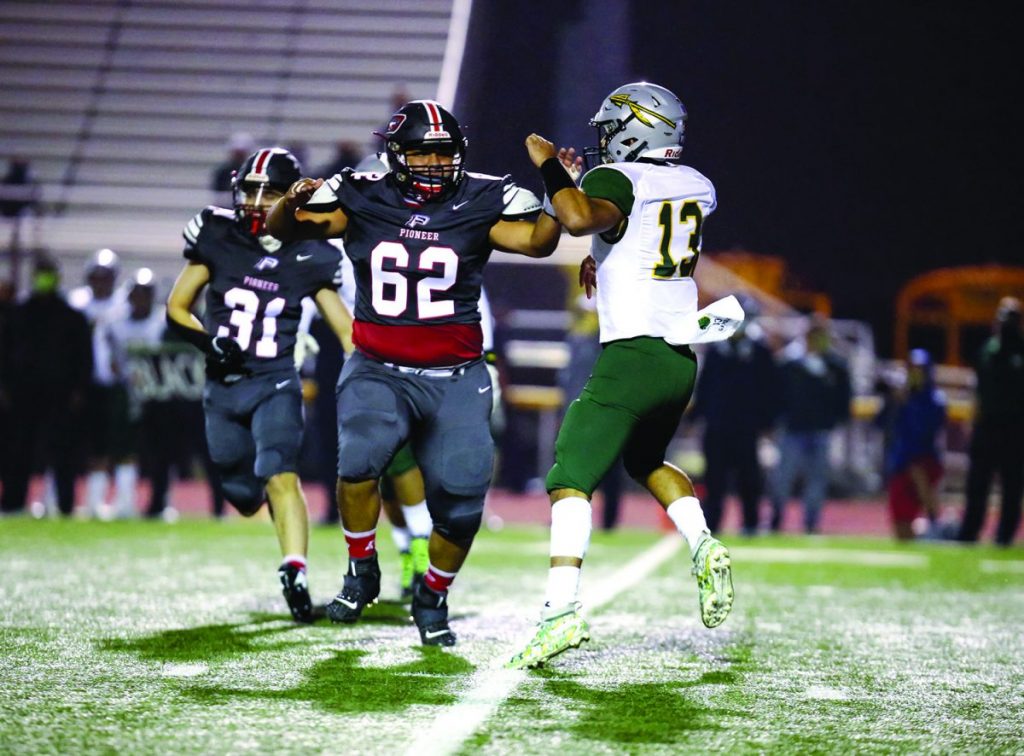 One of those who remembers the Diamondbacks’ 45 – 38 overtime loss to Boerne Champion in the third round of the playoffs last year, as if it took place yesterday, is Pioneer’s First Team All-State quarterback and the Rio Grande Valley’s 2019-2020 Player of the Year, Eddie Lee Marburger.

Having gone undefeated in district play last year, the Diamondbacks will be looking to get off on the right foot against their first District 16-5A II opponent of the 2020 season, as they travel to Roma to take on the Gladiators tonight.

In their only game of the 2020 season so far, the Diamondbacks had no problem defeating the Nikki Rowe Warriors by a score of 49 – 28 two weeks ago. In that game, Marburger passed for 428 yards and ran for 115 more for a total of 543 yards. Last season Marburger passed for a total of 4,505 yards with 58 touchdowns and only five interceptions. On the ground, he ran for 1,009 yards and scored 16 more touchdowns.

In his third year on the Diamondbacks’ varsity roster, Oviedo remembers that overtime loss to Boerne Champion last year all too well. He also believes that this year’s edition of the Diamondbacks football team will learn from the mistakes made in that game.

“We felt like we really shot ourselves in the foot in the first half of that game,” Oviedo said. “We made a lot of mistakes, and that’s not like us. So what we’ve focused on this off-season is cleaning up those mistakes so that when we play those teams up north we learn how to stay calm and not make the mistakes. By doing so, that will allow us to advance further than any other Valley team.”

As for tonight’s game, Oviedo is expecting the Gladiators to come out swinging.

As one of Coach Lee’s co-first assistant coaches, Marcelino De La Fuente is in charge of the defense. When asked what made last year’s Diamondbacks squad so successful, De La Fuente said, “Last year’s team had a lot of talent. We had a lot of talent and those guys had been playing together since they were in junior high. We came together at the right time. At the beginning of the year we tried to find our footing and when we hit that district stride, we began clicking on all cylinders.”

“The season was amazing,” De La Fuente added. “It was further than any Pioneer team had ever gone. And the guys really had it in their minds that they wanted to be historic. They wanted to be that team that every other Pioneer team looks up to saying that they want to be better than that team because they went three rounds deep into the playoffs. And that really motivated them.”

With six starters returning on both offense and defense, there are plenty of players on both sides of the ball that remember how close they came to the fourth round of the playoffs last year, and that is motivating them to do even better in what is most of their senior years.

“That little taste of coming so close against Boerne Champion is really festering in these guys’ minds and they want to get back to that round and possibly further this year for the seniors,” De La Fuente said.

With tonight’s game being the first on the Diamondbacks’ 2020 district schedule, winning it will be the first step en-route to a possible repeat district championship and a possible deeper run into the state playoffs. So what will the strategy be against the Gladiators?

“As you know, this year has been crazy,” De La Fuente said. “And what we’re really focusing on is two things; taking care of our opponents and taking care of COVID. We’re making sure that we’re taking care of the things that we need to take care of to get to play. Roma has not played a game yet so we don’t really know what to expect. They’ve always been a competitive team and we’re going over there so we’re expecting them to show up and give us a fight that we’re going to be ready for.”