Mission Veterans head football coach David Gilpin is well known in these parts for not only the success he has had on the field but  his openness about proclaiming his love for the game and his unwavering confidence in the abilities of his players.  That attitude has led Gilpin to send his team out on the field to face most of the Valley’s local traditional powerhouses in his 12 year tenure and in his words, “play anybody, anywhere, anytime.” He even took on Odessa Permian, the storied program that was featured in the book (and subsequent film) Friday Night Lights, twice.

Gilpin went further this summer; proclaiming on Twitter that “We will play you in the parking lot at HEB if that’s what it takes!!!!!!!”  Gilpin admitted the tweet wasn’t serious; meant more for letting his players understand the mindset he expects from them.  He was dead serious, however, when earlier this week he said, “It (the 2020 season) has literally been the most challenging time of my professional career probably.  You’re not on a weekly basis, you’re not on a game to game basis; you’re on a day by day basis.” 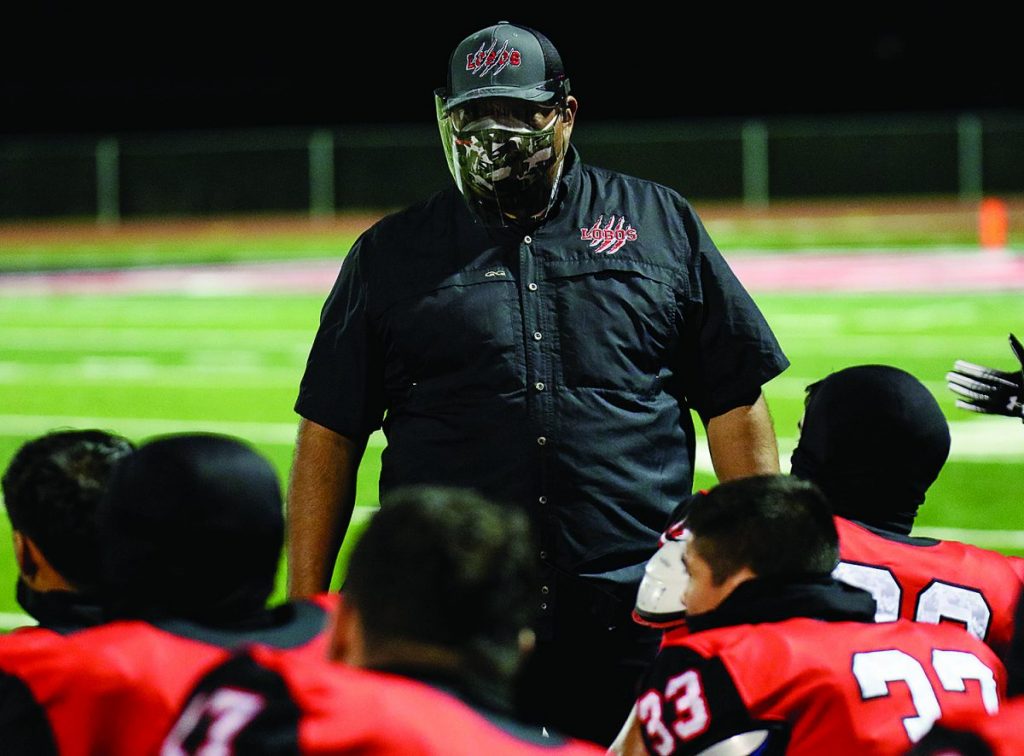 One probably doesn’t have to be a follower of the local prep sports scene to know what Gilpin was referring to.  Without dwelling on the particulars of why it has happened, I think it is safe to say that the 2020 football season has, so far, been chaotic and confusing. And I’m just talking about what has happened off the field.

The season to date has been frequently subjected to cancellations and postponements. Gilpin’s Patriots were scheduled to kick off the season on October 16 at Raymondville but it was shut down the day before. The Sharyland Pioneer Diamondbacks October 22 game with McAllen Memorial was cancelled the day it was to be played. Neither will be made up. The Sharyland High Rattlers opened their season on October 23 with a win over McAllen Rowe but hasn’t played since. Their next scheduled game is Thursday November 19 at Roma.  Pioneer last played October 30 and isn’t scheduled again until next Friday at Mission Vets.  They are currently 2-0 on the year, with a 1-0 record in the District 16-5A Div. II West zone.

Last week’s scheduled Friday night showdown between Sharyland High and Pioneer (dubbed the Snakeskin Classic) is another example of how the season has gone to this point. I spent the early part of last week doing my research and interviewing the two teams’ head coaches in preparation for a preview article of the game. I submitted my story to the Progress Times, whose staff set it up, along with the rest of the paper, for printing on Thursday.  The game was postponed later that night, too late for the story to be retracted.  The game has been rescheduled twice since then and is currently set for Wednesday, November 25.

Another big local rivalry, the Battle of Conway, is scheduled for noon tomorrow at Tom Landry Stadium after being on and off, scheduled and re-scheduled, numerous times this fall. The Eagles of Mission High come into the game with a 2-0 record (1-0 in the West zone of District 31-6A) but haven’t played since October 29. Mission Veterans recorded a big 50 – 23 win over Roma last Saturday afternoon after not playing since October 22. The victory evened their season record at 1-1 (1-0 in the West zone of District 16-5A Div. II).

Even before this season began we knew it would be different. In July the University Interscholastic League (UIL) delayed the start of the 2020 season for 5A and 6A schools to early September over concerns related to the COVID-19 pandemic. The schools of the Big 7, faced with a Hidalgo County health order to stay closed, waited even longer. When the time came to finally hit the field, two schools (La Joya High and La Joya Juarez-Lincoln) made the decision not to even field a team.

The late start meant the 2020 season would not consist of the usual ten regular season games we’ve been used to.  Districts also split into zones when it became apparent that time would not allow a school to play every team in their district. A team’s record within their zone will determine who they play when the three districts that involve Big 7 teams hold seeding games the first weekend in December to determine their playoff qualifiers.

Getting that accomplished by the UIL deadline of December 5 for certifying playoff teams is challenging coaches and administrations to be creative as well. La Joya Palmview fell to Donna High this past Monday night, 18 –17, after opening their season on a Wednesday night the week before.  The game was played on the campus of Palmview High School due to work being done on the lights at La Joya ISD’s Pack Stadium. Lobos head coach Margarito Requenez Jr. liked the setting. “It made it (the environment) different. We finally played a true home game on our campus, which was really nice; something that had never been done here before. It was exciting.” Requenez went on to comment on how it would have been nice to have some other amenities at the game like their pep squad but understood how those, like so many other things, are not always going to be possible this year.  The Lobos are 0-2 on the year, with both losses coming to District 16-5A Div. I West zone opponents.  Their next scheduled game is tomorrow at 5 pm in McAllen against McAllen Memorial. As the season continues, other schools are also scheduling contests on days and at times not typically seen in previous years.

If all goes according to plan, the UIL playoffs are scheduled to begin for the states 5A and 6A schools the second week of December and won’t be completed until January 2021.

Despite how events have transpired so far this season, Gilpin’s own mindset hasn’t wavered.  “The ability of coaches and kids (across the country) to just roll with the punches and stay positive has really been a rewarding thing for me,” he said. “We just have to keep our heads down and move forward.”

Well said coach. And good luck to all of our teams as they do.