or: what’s the deal with Netflix canning critically-celebrated series?

If the character-driven narrative doesn’t capture your attention, perhaps the spandex and vibrant colors of the 1980’s will.

Netflix’s GLOW, a series spanning three seasons, is a smart and endearing show that solidifies this era as the golden age of television. Starring a diverse cast, all lovable misfits living in a world they don’t seem to fit into, GLOW boasts some of the most engaging moments on screen in the last few years. 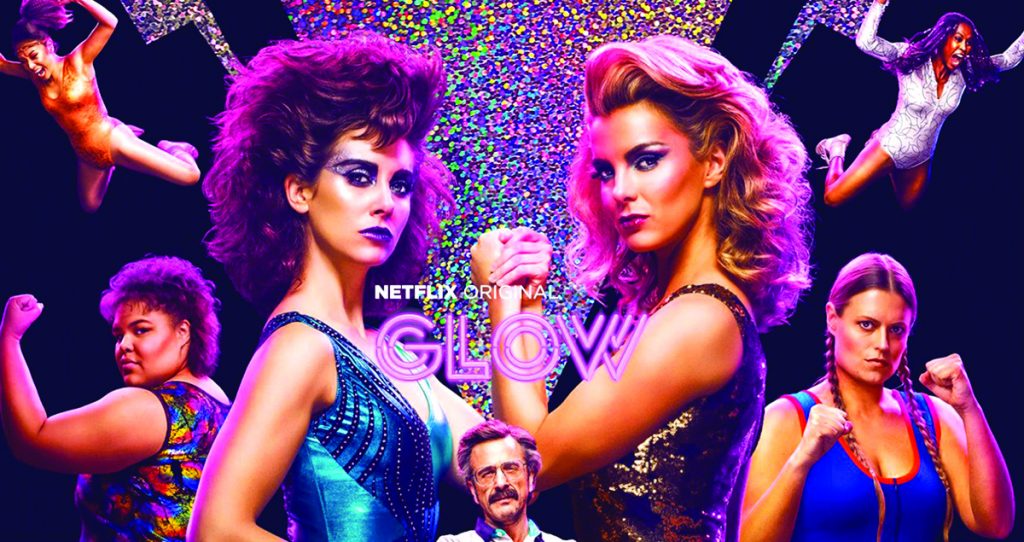 The series is set in the 1980’s, loosely based on the real-life inception of the Gorgeous Ladies Of Wrestling organization. With high-flying stunts, hilarious missteps and choreographed spectacles, audiences will find a healthy balance of story and stage.

The heart of GLOW, however, does not lie within the vivid costumes, big hair and wild makeup. It lies within the journeys and arcs characters undergo. While some of the show’s stars are more developed than others, each episode offers the kind of sincerity and honesty most series won’t even attempt to display.

It’s centered on women – women of all backgrounds, shapes and sizes. What works about GLOW is the fact that it does not pander to the typical “girl power” genre – it empowers women by showing us as we are (flaws included), and how we manage to determinedly pick ourselves up off the ground whenever we fall.

The empowerment and entertainment aspects of GLOW are not exclusively for women – it appeals to men as well, and features some brilliant comedic and dramatic performances most viewers will find enjoyable. As we learn about the trials characters face, we find ourselves rooting for them to reach their goals – whatever they may be.

GLOW was originally green-lit for a fourth and final season earlier this year, and principle production even began in February. Cast and crew shot the first episode of season four and were about to begin on the second when the coronavirus pandemic hit the country.

Production was delayed at first, until Netflix announced in early October that they would be cancelling the series and leaving the cliffhanger ending as our final look at the characters. This is not a new practice for Netflix – according to an article on Wired citing data from Ampere Analysis, Netflix original series will only get two seasons before being cancelled on average.

Often, fans of the series aggressively campaign for Netflix to at least wrap up the stories of their favorite characters (to no avail). Netflix bases their renewals on data, as well as the viewership and cost of renewal.

Funnily enough, it is often cheaper for Netflix to start a new show from scratch rather than renew a currently-running one – shows begin to cost more after a second season, as premiums rise. Unless you have a Netflix-wide reach like Stranger Things, even a supportive niche audience will have little sway over the executives in charge.

The circumstances surrounding GLOW are unique – the pandemic certainly did a number on the production (as it did on other Netflix originals, which have been renewed then retroactively cancelled). Also of note, members of the cast penned a letter to Netflix executives calling for more diversity behind-the-scenes, on the production and writers’ side of the series.

According to those actors, Netflix executives were open to their requests, and changes were being made as the show began production on its fourth season. However, due to the nature of the story – shot entirely in Los Angeles, California and involving intimate, close interactions, heavy breathing and exertion – there were major obstacles to getting GLOW up and running again. It was easier to just cancel.

Questions still remain – is cost really more important than the completion of art? Can a company put a time stamp on quality, meaningful stories that truly impact people (even when there is no danger to the bottom line)? If you’re asking me, you’re asking the wrong person – I’m sure my answer would differ from the powers that be.

It may be frustrating to decide to get into a show knowing it won’t have its finale wrapped up nicely in a bow – but take my word for it. GLOW is one you’ll want to at least get on the mat for.

Certification: TV-MA (Mature Audiences) for sex and nudity, profanity/language, violence and drug use

Currently available to watch/stream on Netflix