Clemente Gonzalez Jr. and his wife Teodora arrived at Tom Landry Stadium Saturday hoping to get the chance to see Mission High and Mission Veterans face off in the Battle of Conway. When they were told that no tickets were being sold due to seating restrictions the couple did the next best thing, pulling their camping chairs out of their car and settling down in the shade of the scoreboard on the stadium’s east side outside the venue. Gonzalez told me he had been watching Mission football games since 1970 and while he preferred being in the bleachers he seemed perfectly content where he was. Being Eagles fans, the Gonzalez’s most likely enjoyed what they saw as well; a 56 – 21 Eagles win to improve to 3 – 0 on the season. The Patriots fell to 1 – 2

Much like their previous two wins the Eagles got off to a fast start, taking a 7 – 0 lead on their first possession of the game following a deflected punt. Andrew Maldonado’s one yard run got the Eagles on the scoreboard first, set up by Jeremy Duran’s 34 yard pass to Jose Cortez on their first play from scrimmage. 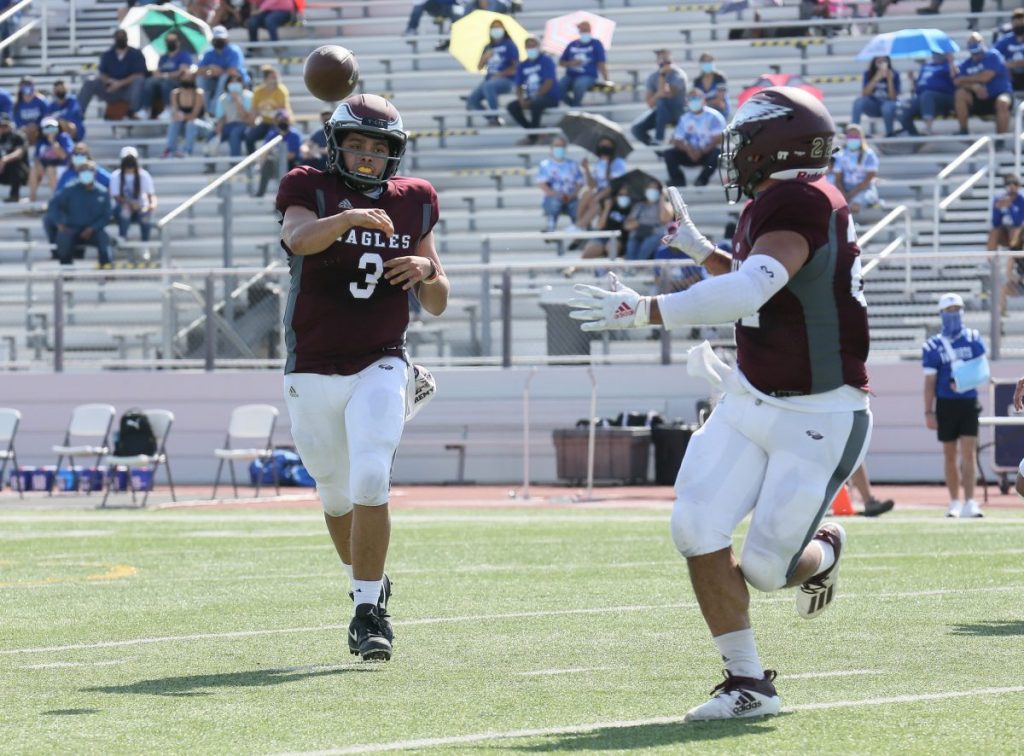 Jeremy Duran (#3) finished the night with four touchdown passes, two to Cortez and one each to Jones and Jose Ortiz.

It was 13 – 0 by the end of the first quarter thanks to a 65 yard drive that took over eight minutes off the clock. The Eagles converted on four fourth down plays during the drive, one due to a Patriots penalty.  Damian Cortez’s five yard run on fourth and five, their 18th play of the drive, accounted for the score.

The Patriots came to life in the second quarter courtesy of two Ricky Reyna touchdown passes. The first found Jaythan Barrera from 51 yards out and the second, a 23 yarder to AJ Gonzaque, cut the Eagles lead to 19 – 14 with just over two minutes left in the half.

It was the closest the Patriots would get. An 80 yard pass from Duran to Jose Cortez on the Eagles first play following Gonzaque’s score made it 27-14. The Patriots turned it over on their first play after the Cortez score and it was 35 -14 a short time later when Duran hit Tajh Jones from 10 yards out.

Two more touchdowns in the third quarter and another early in the fourth built the Eagles lead to 56 – 14 before the Patriots found the end zone late in the game on a Reyna two yard run.

Duran finished the night with four touchdown passes, two to Jose Cortez and one each to Jones and Jose Ortiz. Andrew Maldonado had two rushing scores for the Eagles. Jones and Damian Cortez each had one. Duran ran in a two point conversion and threw to Jones for another. Danny Montes added four extra points.

The Eagles defense contributed to the effort with a deflected punt, two fumble recoveries and an interception from Luis Briseno in addition to having defenders in the Patriots backfield for much of the night.

Reyna finished with two touchdowns passes for the Patriots, one each to Gonzaque and Jathan Barrera, in addition to his late scoring run. Albert Hinojosa added three extra points.

“I was really pleased with our team,” said Mission coach Koy Detmer, The team hadn’t played since October 29 but looked sharp most of the afternoon. “I was really proud today of the way they came out and got after it.”

Detmer was also happy with the fact that the on again, off again, scheduled and rescheduled game between the two teams finally happened. “It was good, you know, good for the kids,” he said. “They look forward to that game (along with) the parents and the community. It was good we were able to get that in in a challenging year.”

Mission Veterans coach David Gilpin echoed Detmers’ thoughts on getting to continue the rivalry. “It is good we got to get this game in,” he said. “I’m glad Mission’s back on the field as well.”

The game itself had no bearing on the two teams’ district records. The Eagles are 1 – 0 in the West zone of District 31-6A, the same for the Patriots in District 16-5A Div. II. Both teams, however, have big ones coming up. The Eagles are scheduled to host PSJA North in a District 31-6A West zone match-up on Friday November 27 at 12 pm while the Patriots are scheduled to welcome Sharyland Pioneer to Tom Landry Stadium on Friday November 20 at 7:30 pm in a District 16-5A Div. II West zone tilt.