Covering sports during a pandemic

The COVID-19 pandemic has spread throughout this nation like wildfire, bringing death and tragedy to a quarter of a million of its citizens and to many times more that number of their friends and family members. It has disrupted all of our lives in one way or another and wreaked havoc across most aspects of our daily lives.

Looking back at the early stages of this pandemic here in the United States, it was the suspension of the NBA’s season and the cancellation of all Division 1 college basketball tournaments that opened a lot of our eyes to the fact that this Corona Virus, as it was more commonly known at the time, was something to be taken seriously; and that it was about to change our lives in ways that we never imagined possible. 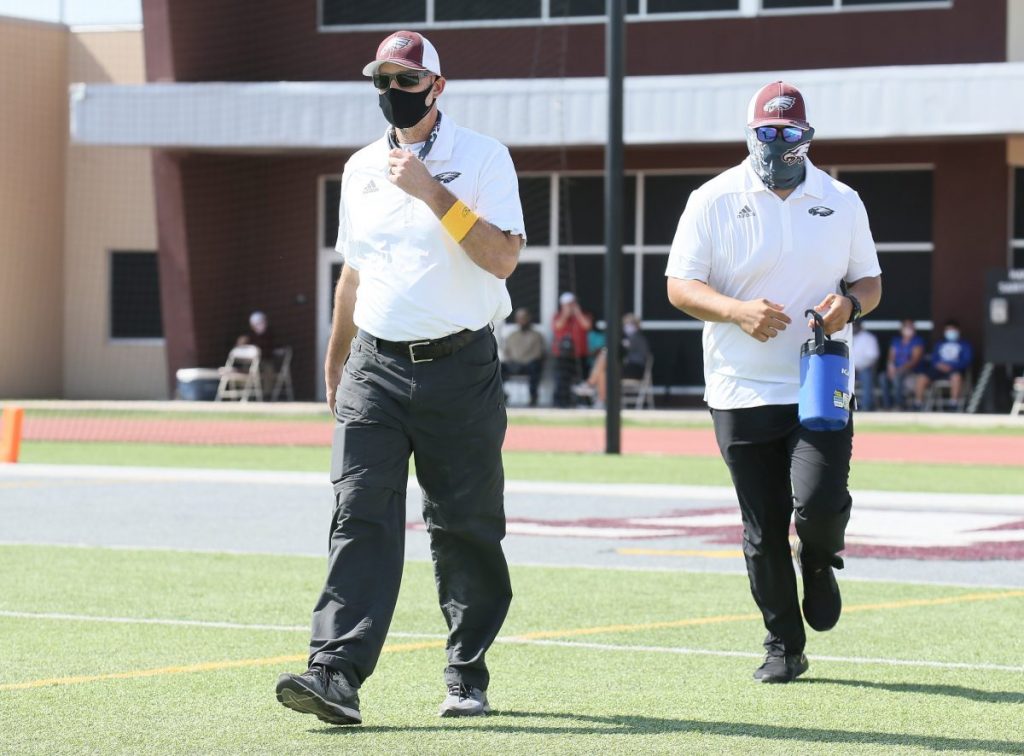 The fact that sports was the “canary in the coal mine” for many of us is something that I myself, as a sports writer and photographer, remember all-too-well. And while I soon came to realize that the sports world was about to be turned topsy-turvy, I had no idea how COVID would affect how I, and my cohorts at the Progress Times, fellow photographer Mario Magallon and fellow sportswriter John Hamann, cover high school sports in the Valley.

It all began last spring as the local high school soccer seasons were winding down and the baseball and softball seasons were just getting underway. Rumors of games, and even seasons and post-seasons, being cancelled by the UIL (University Interscholastic League), were spreading. The rumors soon became reality and the local and state-wide shutdowns brought about by the rampant spread of the virus, were resulting in schools and all their extracurricular activities, being shut down. As the unthinkable became the new reality, Mario, John and I suddenly found ourselves with no soccer playoffs to cover and no baseball and softball seasons to prepare for. As difficult as it was for us to accept the fact that we had covered and photographed our last sporting events of the school year, we realized that it was the student athletes, their parents and the coaches who were hit the hardest by the sudden cancellation of all remaining sporting events.

As the days, weeks and months passed and the traditional summer vacation months of June, July and August came and went, we all wondered if the upcoming fall sports of football, volleyball, tennis and cross-country would meet the same fate met by the spring sports. Fortunately, the three school districts whose teams we cover, La Joya, Mission and Sharyland, all decided to allow these sports to take place at the varsity level.

While Mario, John and I were glad to know that we would soon be covering high school sports again, little did we realize how different our jobs would be during a pandemic, and how so many things that we had come to take for granted were about to change.

Case in point, it used to be that all we needed to gain access to the school campuses, the stadiums and gyms were our press credentials. The fact that most security guards at the local high school sports venues recognized us and even knew us by name, meant that we were used to just showing up a little before game time and walking into the stadium or gym as we said hello to or shook the hand of the security guard on duty at the gate or entrance.

All of a sudden, each school district had new rules and protocols for allowing anybody other than the students and staff onto school campuses. Mission CISD for example, was now requiring all members of the media to fill out a COVID release form which would be submitted to the AD (athletic director) at least a day in advance of the when we were requesting access to the campuses of either high school. The AD would then add our names to a list of people that the security guards would allow onto the campus or into the stadium or gym. Failure to follow this procedure would result in the access requested being denied.

Other school districts, such as La Joya and Sharyland, set up temperature checks at the entrance to their sport venues to make sure that members of the media did not have a fever, one of the earlier symptoms of COVID-19. Sharyland ISD also started restricting bags and backpacks being carried in to their sports venues to be see-through only. Although I’m not sure how whether or not bags and backpacks are see-through make any difference when it comes to the transmission of a contagious disease.

While these additional safety procedures and protocols were somewhat of an inconvenience, they were all things we could live with. After all, they were instituted in an attempt of minimizing the risk of spreading COVID to the student athletes, the coaches and the staff.

What became much more difficult for Mario, John and I to deal with was the constant cancelling and/or rescheduling of games. In normal years, once we received each team’s schedule we knew exactly when and where each upcoming game was going to be played. This allowed us to plan accordingly. As the sports editor for the Progress Times, one of my responsibilities is to assign Mario, John and myself the games we each will be covering from week to week. When doing this, I do my best to make sure that we cover twofer games (two Big 7 teams playing each other) and games with playoff implications. I also do my best to give each of the Big 7 teams as much coverage as possible. However, with games being cancelled and/or rescheduled with as little as only a few hours of notice, it became impossible to plan ahead on which game or games each of us would cover one week to the next.

One example of how crazy things got when it came to rescheduling was the time that Mission Eagles’ head football coach Koy Detmer sent John three revised schedules within an hour. Detmer then added, “Sorry about that. This schedule is changing a lot this year.”

The last minute cancellation or rescheduling of games has also resulted in our having to quit featuring what has become a tradition at the Progress Times, our Big 7 football Game of the Week. Here’s just one example of why we came to this decision; I recently gave John an assignment to write a story previewing the game between the Sharyland Rattlers and the Pioneer Diamondbacks, the Snakeskin Classic, which was originally scheduled to be played Friday, Nov. 6. John wrote his story and submitted it by our deadline of 3 p.m. Wednesday, Nov. 4. The paper went to print Thursday morning. Later that day it was announced that the game had to be rescheduled due to a COVID related incident. However, it was too late for us to stop the presses. As a result, one of our two sports stories for that week was previewing a game that would not be played until weeks later. That is why we have decided not to preview any more games, only recap games that have recently been played.

While that example of how the last minute rescheduling of a game resulted in us running a story we would not have run otherwise, here’s an example of how the cancellation of a game did not allow us to cover a significant achievement that the Mission Lady Eagles’ volleyball team should’ve been recognized for.

Last week Coach Edna Clemons’ team was one win away from claiming their first district championship in 29 years. All they needed to do was to defeat the winless La Joya Lady Coyotes and they would clinch the district title. I was all set to cover this game and capture this historic, celebratory moment with my camera. I knew how much it meant to Clemons and her team so I wanted to make sure that their achievement received the coverage it deserved.

The morning of the game I texted Clemons to confirm the time and location of the game (something I do a lot more now than I’ve ever done before). That was when she replied with, “We have clinched the district title! Tonight’s game has been cancelled due to a COVID-19 case in La Joya vb.”

Yes, there have been many frustrating and disappointing moments for the Progress Times’ sports staff as a result of the havoc COVID-19 has wreaked on the local sports scene over the past eight months. And while we know that they do not compare with what the student athletes, their parents and the coaches have had to deal with, it is our hope that by reading this you will come to realize that we are doing the best we can under difficult circumstances. And that Mario, John and I are determined to overcome these challenges, in order to continue bringing you, our loyal readers, the high quality of local high school sports coverage that you have come to expect from the Progress Times over the years.