A trio of games, all with post season implications, made up the latest round of contests involving football teams from the Big 7. Going into this weekend’s contests there are four Big 7 schools that have either clinched a post season berth or can qualify with victories tomorrow. In addition, Sharyland Pioneer and Mission High can claim district titles with victories tonight.

The seventh edition of the Snakeskin Classic between Sharyland High and Sharyland Pioneer  took place the night before Thanksgiving, and it lived up to its name. The high scoring affair, won by Pioneer 54 – 41, was tied at halftime, a three point game going into the fourth and wasn’t decided until Pioneer’s Alejandro Vasquez ran back an interception for a touchdown with three seconds left in the contest.  The win clinched a playoff spot for the Diamondbacks (4 – 0; 3 – 0 in district) and put them into the District 16-5A Div. II championship game tonight vs. Mercedes (5 – 0) at McAllen’s Veterans Memorial Stadium. Kickoff is currently scheduled for 7 pm. The loss dropped Sharyland High to 2 -1 on the year (1 – 1 in district play). 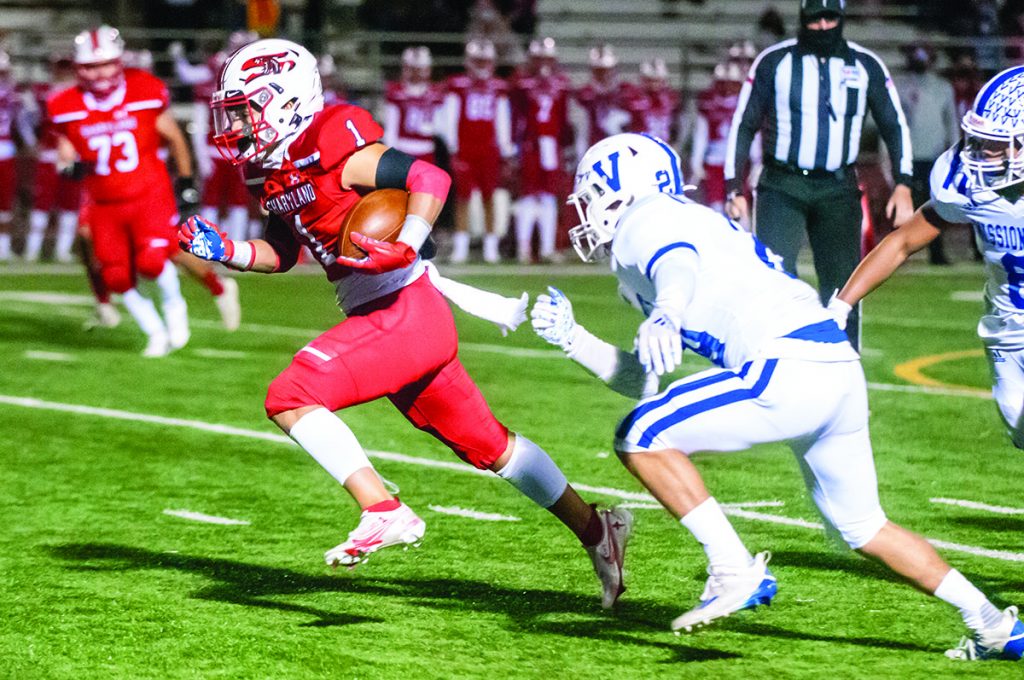 Pioneer quarterback Eddie Lee Marburger threw four first half touchdown passes to three different receivers. Tristan Castillo caught the first for a 34 yard score. JJ Snyman scored the next two from 52 and 32 yards out and Mike Ramos put Pioneer up 27-17 with a 28 yarder.

The Rattlers stayed in it with touchdowns from Rolie Saenz (on a pass from Benji Valdivia), a short run from Luis Gonzalez and a 45 yard run from Valdivia. Kali Nguma added two first half field goals; the second a 46 yarder on the last play of the first half to tie the game at 27 all.

The back and forth nature of the game continued in the second half. Marburger broke the tie with a 13 yard run to open the second half and ran for two more scores to keep the Rattlers at arm’s length the rest of the way. Sharyland kept it close with two more Nguma kicks and a scoring run from Saenz. They trailed 48 – 41 with the ball and just under a minute to play but had their comeback attempt stopped by Vasquez’s 40 yard pick six.

The Rattlers played again this past Monday night, hosting Mission Veterans in a contest to determine seeding for tomorrow’s District 16-5A Div. II play-in games. Sharyland’s 40 -25 victory improved their record to 3 – 1 on the year (2 – 1 in district play). The win also secured the districts West zone #2 seed and a scheduled match-up with PSJA Southwest (2 – 3) at 1 pm tomorrow at Richard Thompson Stadium.  The Patriots ( 1 – 3, 1 – 2), finish as the #3 seed from the West zone and are scheduled to face Edcouch- Elsa tomorrow in a 7 pm contest with the Yellow Jackets (5 – 1) at Benny Layton Sr. Memorial Stadium in Elsa. The winners from those two games will advance to the first round of the UIL state playoffs that begin next week. The losers will see their seasons end.

The Monday night contest between the Rattlers and Patriots, much like the Snakeskin Classic last week, was a tight affair until Sharyland’s Alan Gonzalez returned an interception 35 yards for a touchdown with a little more than a minute to play to put the game out of reach. 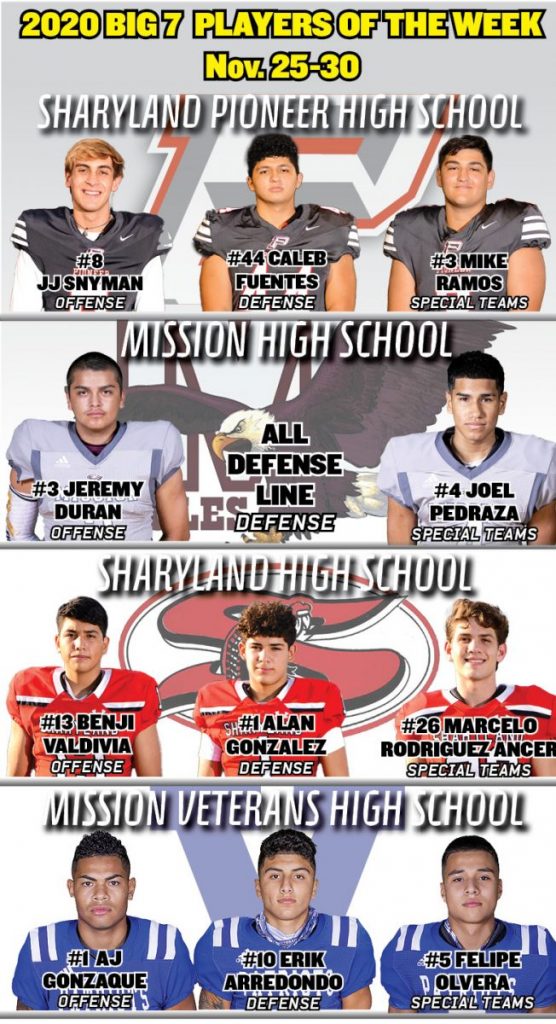 The Rattlers defense gave the Patriots problems most of the night. Javier Trevino and Marcelo Ancer combined to force a turnover on the Patriots opening drive that led to the game’s first score on a short pass from Valdivia to A.J. Madrigal. A short scoring run from Patriots quarterback Ricky Reyna, followed by a Noah Garcia score on a pass from Reyna put Veterans up 12 – 6 early in the second quarter. Garcia’s score was set up by a Cody Von Wald fumble recovery. Two more Vadivia scoring passes, caught by Madrigal and Saenz, with a Patriots score in between (Reyna to AJ Gonzaque), made it 20 – 19 Rattlers at the half.

Reyna and Gonzaque combined for a 60 yard pass early in the third quarter that put the Patriots in position to take the lead but the Rattlers held their ground, ending the drive with the first of Gonzalez’s two interceptions. A blocked punt by Ancer, midway through the quarter, gave the Rattlers great field position; allowing them to extend their lead to 27 – 19 on a short run from Gonzalez.

The Patriots opened the fourth with a 71 yard score from Gonzaque off a Reyna throw to cut the deficit to two but the Rattlers defense rose up again, stopping the Patriots two point conversion attempt on a nice open field tackle from Diego Cardenas. Valdivia’s  pass to Saenz from 25 yards out pushed the Rattlers lead to 34 – 25 a short time later and the Patriots never really threatened again; their last four possessions ending in a punt, a turnover on downs, Gonzalez’s pick six and another turnover on downs. The Patriots defense did their job to keep it close as well; forcing five punts and getting two takeaways in the second half on a Luis De Hoyos fumble recovery and a Mike De Leon interception.

In District 31-6A the Mission Eagles clinched a playoff spot and put themselves into their district’s championship game, winning the top seed in the South zone by virtue of a 41 – 7 win over PSJA North last Friday afternoon at Tom Landry Stadium. The Eagles are scheduled to travel to Edinburg tonight to take on Edinburg Vela for the District 31-6A title. Kickoff is scheduled for 7:30 pm tonight at Richard R. Flores Stadium in Edinburg. Both teams are currently 4 – 0 on the season.