A quartet of football games over the past two days to close out the regular season produced a mixture of results for the football teams of the Big 7. It started on Friday night with two contests to determine district titles.

In Edinburg, the Edinburg Vela Sabercats took control of a tight contest with two long scoring drives in the second half to defeat the Mission Eagles 24 – 7 Friday night at Richard R. Flores Stadium and claim the District 31 – 6A title. 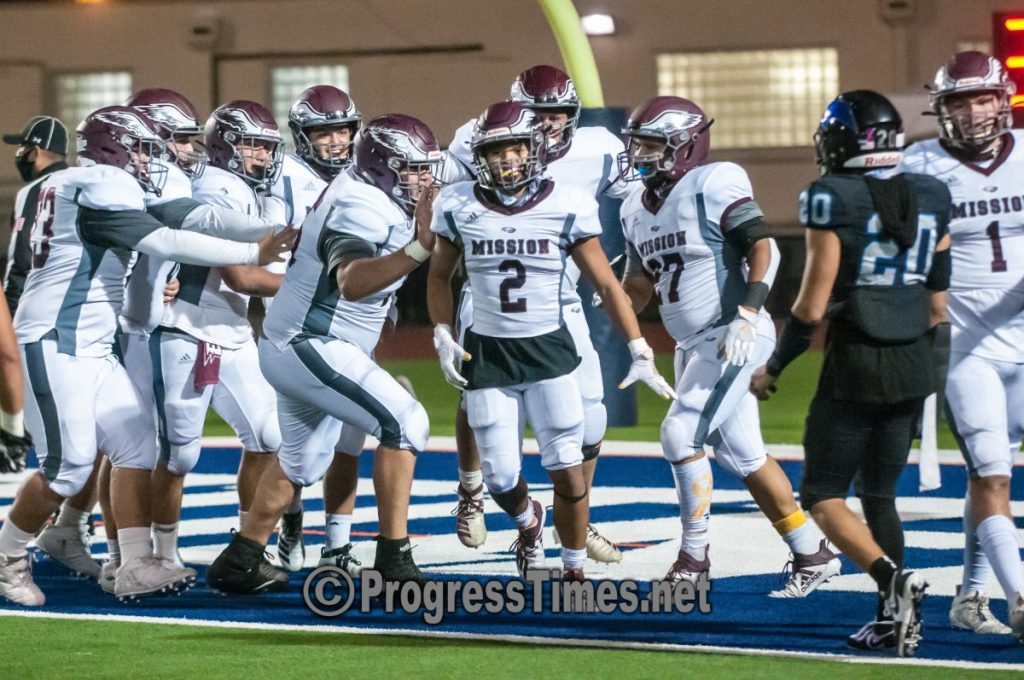 Mission wide receiver Gilberto Bernal is congratulated by his teammates after scoring what turned out to be the Eagles’ only touchdown of the game against Edinburg Vela Friday, Dec. 4, 2020. Progress Times photo by Luciano Guerra.

The Sabercats opened the game with a scoring drive on their first possession to go up 7 – 0 and made it 10 – 0 on a field goal following a Mission turnover.

The Eagles threatened twice near the end of the second quarter but could only manage one score. Jeremy Duran’s 32 yard pass to Gilberto Bernal just before halftime made the score 10 – 7 but Mission would come no closer.

The Vela defense forced four Eagles punts in the second half as well as a turnover on downs to go along with their offense’s two scores. All of the Sabercats touchdown drives were aided by penalties on the Eagles defense but the unit still played well enough most of the game to keep it close.

Quarterback sacks by Dante Lopez, Luis Balderas and Justin Soto forced two Vela punts and a turnover on downs in the first half. A fourth stop, deep in Vela territory forced a third punt that helped set up the Eagles lone score.

The loss dropped the Eagles to 4 – 1 on the year. Next up for Mission is a contest with San Benito this Friday at Tom Landry Stadium in Mission in the first round of the UIL Class 6A Division I playoffs. Kickoff is currently scheduled for 7 pm.

Over in McAllen the Sharyland Pioneer Diamondbacks claimed their second straight District 16-5A Div. II title by virtue of their 59 – 40 victory over the Mercedes Tigers at Veterans Memorial Stadium. Pioneer closed out the shortened 2020 regular season with a 5 – 0 record.

Like the Eagles game this one was a tight one at the half as well; but unlike what happened in Edinburg, this one featured offense; lots and lots of offense.

The two teams scored touchdowns on each of their first three possessions to open the game. Mercedes scored first, forcing the Diamondbacks to answer. The scenario was repeated twice more over the course of the first quarter.

Pioneer quarterback Eddie Lee Marburger was responsible for all three of the Diamondbacks scores with runs of 3, 30 and 62 yards. His late second quarter scoring pass to Mike Ramos Jr. and the ensuing two point conversion (also Marburger to Ramos Jr.), answered the Tigers fourth score and sent the teams into their respective locker rooms tied 28 – 28 at the half.

Pioneer took the lead for good in the third quarter on a Marburger pass to Joseph Graham Jr. on the opening drive of the half and increased it with a the help of some timely defense. The Tigers first two drives of the third both ended in Pioneer territory but nether produced points, thanks to fourth down stops by the Diamondbacks D. The second

ended with a solid hit from linebacker Jay Palacios on the Tigers quarterback to stop him short of converting.

Linebacker Isaac Rivera added an interception in the fourth quarter to stop another Tigers drive.

The Diamondbacks offense, in the meantime, kept right on clicking. Marburger added a fourth rushing touchdown to push the led to 42 –

28 and hit JJ Snyman from 18 yards out to make it 49 – 28 early in the fourth. Each team scored twice more to close out the game. Marburger hit Graham Jr. on a deep pass down the sideline for a 72 yard touchdown and Ramos Jr. added a 21 yard field goal.

The Diamondbacks will open the UIL Class 5A Div. II post season against Medina Valley at Richard Thompson Stadium in Mission this Friday. Kickoff is currently scheduled for 7:30 pm.

Two more contests on Saturday, both in District 16 -5A Div. II, were de facto playoff games. The winners would advance to the postseason while the losers would see their seasons come to an end.

Playing their fourth game in 17 days the Sharyland Rattlers fell to PSJA Southwest 21 – 7 in an afternoon contest at Richard Thompson Stadium in Mission. The Rattlers finished the season at 3 – 2 and saw their streak of consecutive state playoff appearances end at 12.

Much like the Friday night contests, it was another close game. The Rattlers trailed 7 – 0 at the half, despite a number of chances. After three first quarter punts the Rattlers threatened three times in the second, but missed a field goal, had their second drive stopped on fourth down and fumbled the ball away deep in Southwest territory just before the half.

A long touchdown drive by the Javelinas to open the second half increased their lead to 14 – 0 and the Rattlers responded with their longest drive of the night. It was, however, another fruitless one; ending at the Southwest 10 yard line.

A fumble recovery by the Rattler’s Jake Martinez got the offense the ball back on the next play and quarterback Benji Valdivia made it 14 – 7 with a 10 yard run. Another takeaway, from a Marcelo Ancer interception, put the Rattlers in position to tie it up but they turned it over on downs once again.

The Javelinas added another score and closed out the game with an interception of their own.

The regular season wrapped up on Saturday night in Elsa at Benny Layton Sr. Memorial Stadium with a match-up between Mission Veterans and Edcouch – Elsa for the final District 16-5A Div. II playoff spot. 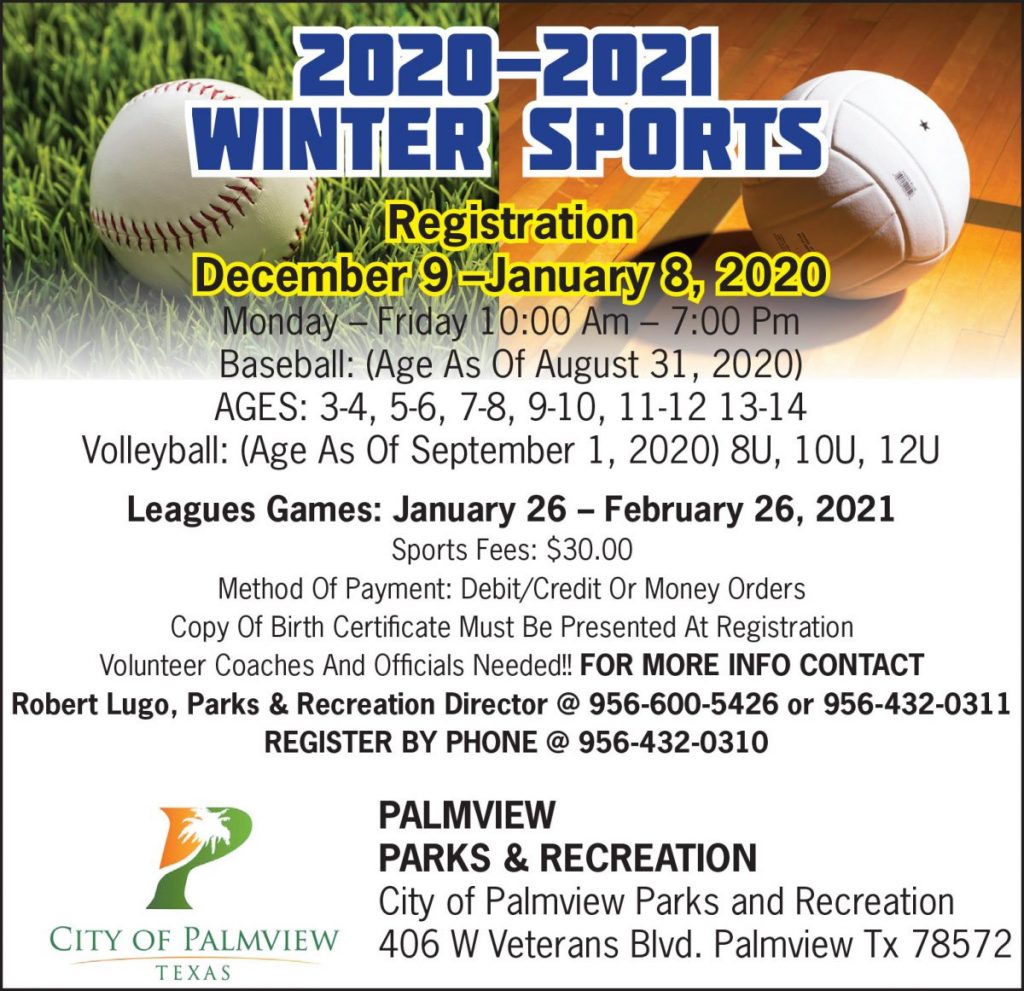 Veterans quarterback Ricky Reyna threw for three first half scores (two to AJ Gonzaque, one to Jaythan Barrera) and the defense got takeaways from Luis De Hoyos, Mike De Leon and Cody Von Wald to help build the lead. Gonzaque had a rushing score as well. The Yellowjackets stayed close with a two rushing scores and three interceptions of their own before coming out and dominating the second half.

Edcouch scored on their first three possessions of the second half, the last on a short run from Justin Galan to go up 35 – 28 early in the fourth quarter. The Patriots had two chances to tie the game but fumbled away the ball on one possession and failed to convert on a fourth down on the second.

Galan scored his fifth touchdown of the night on the Jackets final possession to secure the win.