In case you haven’t noticed it’s that time of year again. Yards are being decorated and stores are starting to fill up with shoppers.  The weather is finally getting cooler as well. There is something different, however, on the local sports scene. Whereas in previous years you didn’t see many, if any, local high school teams playing football in mid-December that is not the case this year. Due to the delayed start of the 2020 season, this weekend marks the beginning of the postseason for the state’s Class 5A and 6A teams; the second season as some call it. Throw out the regular season records, everyone that’s in gets a fresh start.

That is not meant to diminish what the two football teams from the Big 7 who are playing tonight have accomplished and overcome in the past few months. In fact, every school that made it through this extraordinary year is deserving of credit for doing just that. It was a season that required overcoming opponents both on and off the field. But, no matter the circumstances, it is only the on field victories that count when it comes to garnering a post season appearance; something Sharyland Pioneer and Mission High had little difficulty with in the regular season. 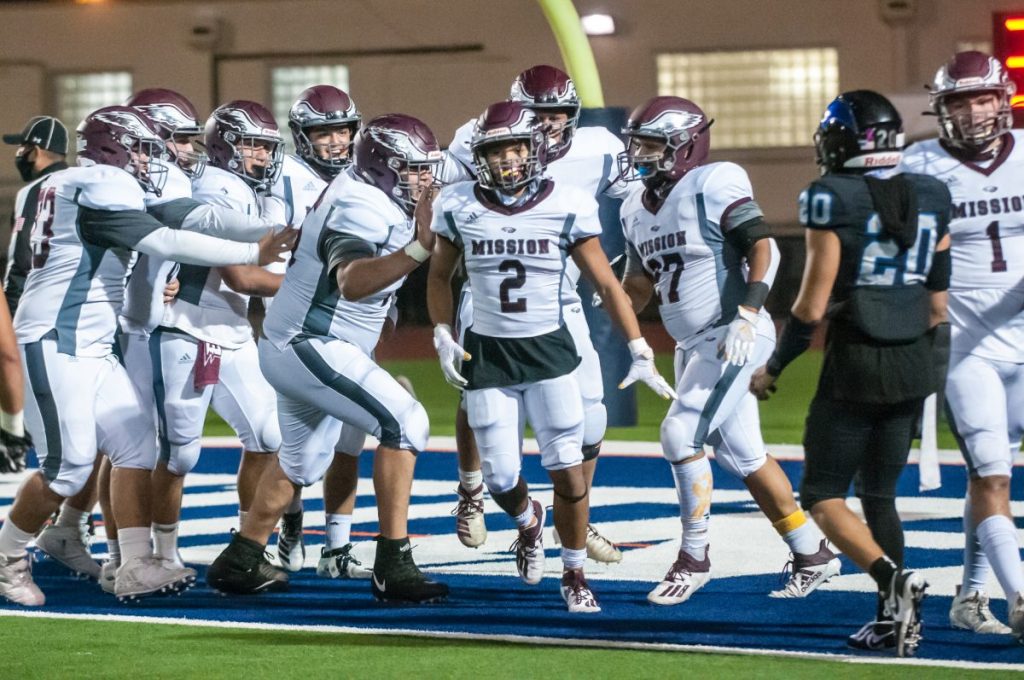 Pioneer finished the shortened regular season with a 5 – 0 record and their second straight District 16-5A Div. II title by virtue of their 59 – 40 victory last Friday night over Mercedes. The Diamondbacks open the postseason tonight at Richard Thompson Stadium in Mission against the Medina Valley Panthers from District 15-5A Div. II. Kickoff is scheduled for 7:30 pm.

Pioneer started the 2020 season with high expectations after their 2019 run to the third round of the playoffs and the return of several key players from that squad. They have not disappointed. The Diamondbacks have averaged over 53 points a game this season behind the arm and legs of quarterback Edie Lee Marburger. The senior has passed for close to 2000 yards and thrown for 19 touchdowns while rushing for over 600 yards with 14 scores.

Marburger has targeted a number of receivers over the course of the season. Classmate Tristan Castillo leads the group with 37 receptions for 699 yards and 6 touchdowns and fellow seniors JJ Snyman and Mike Ramos Jr. have seen their numbers go up recently.  Sophomore Joseph Graham Jr. has recorded five scores. Castillo and senior Taylor Esparza have, along with Marburger, contributed to the Diamondbacks rushing attack.

The Diamondbacks’ defense has not exactly been a stone wall this year, giving up an average of 32 points per game, but they have recorded at least one takeaway in each of their five games. Senior Alejandro Vasquez’s pick six sealed the victory for Pioneer in a big win over Sharyland High two weeks ago and the unit did their part in last week’s district title game as well, coming  up with two big fourth down stops in the third quarter along with a fourth quarter interception from senior  Isaac Rivera. Junior linebacker Caleb Fuentes is the team’s leading tackler.

After two wins in October to open the season, the Diamondbacks went 20 days without a game but have had the chance to find some stability recently with three wins in the last three weeks. Tonight marks their fifth straight playoff appearance and third straight under coach Tom Lee. The 2019 squad’s two posts season victories were the first in school history. 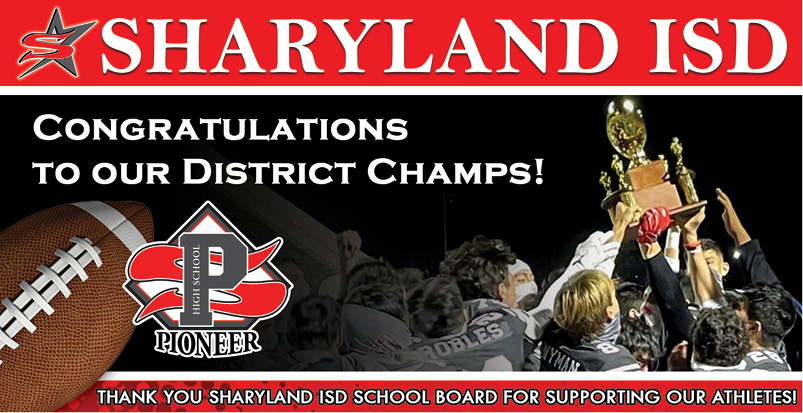 Lee talked about the fact that it is playoff time in mid-December and this Friday’s game will only be his squad’s sixth of the year. “We’re obviously not where we were last year at this time, but everybody’s in the same boat as us. I think we are getting better every week and that’s kind of the key. I look at it as a positive that we haven’t played our best football yet and we’re going to start getting that on stride here this week.”

Across town, the lights will be on tonight at Tom 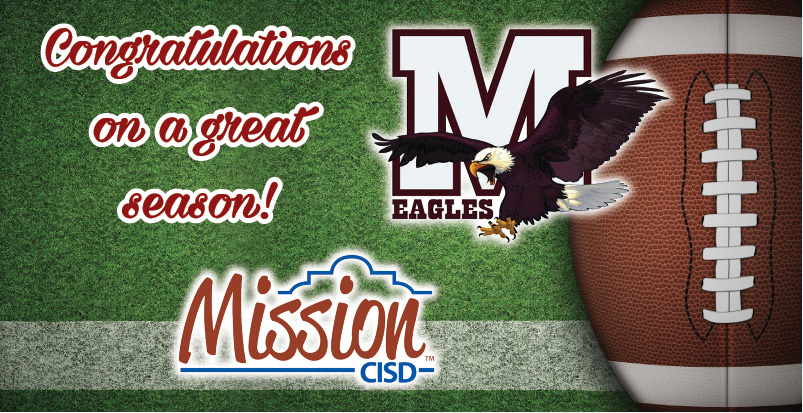 Landry Stadium as well. Mission High is hosting the San Benito Greyhounds from District 32 -6A in a Class 6A Div. I battle scheduled to kickoff at 7 pm.

Tonight marks the third straight year the Eagles of Mission High have reached the postseason under coach Koy Detmer. The Eagles narrowly lost their opening round games in both 2018 and 2019 to Laredo United.

The 2020 team has relied heavily on 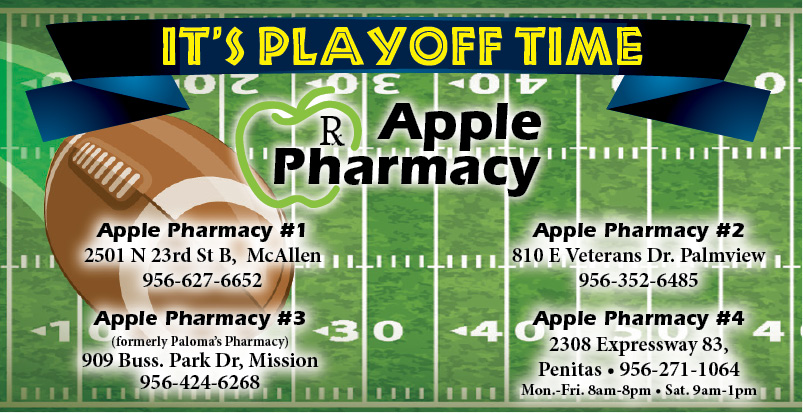 returning players from last year to get back to the postseason.  Jeremy Duran has been starting games for the Eagles at the quarterback position since his freshman year and has had another big year in 2020.

The junior has passed for over 1,200 yards and thrown 13 touchdown passes. Senior Jose Cortez has been the biggest threat in the passing game with 20 receptions for over 400 yards and five scores. Classmate Gilberto Bernal has 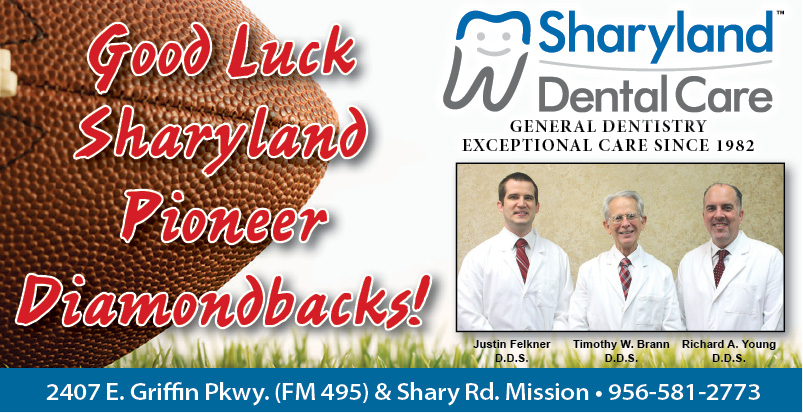 three scores and junior Tajh Jones has caught 16 for 170 yards and one score. Senior Andrew Maldonado and junior Damian Cortez have done most of the work for the Eagles rushing attack, combining for just under 350 yards and eight scores.

For most of the season the Eagles defensive unit has been rock solid, having recorded a shutout in one game and giving up only one score in two others. Junior Luis Balderas is the team’s leading tackler, while classmates Luis Briseno and Cristian Hernandez have recorded three takeaways each.

The Eagles came flying out of the gate in October with two dominate back to back wins and added two more in November despite having to navigate a 15 day pause before the third game and a 12 day break before the fourth. They had their own chance at a district title last Friday night but fell to Edinburg Vela 24 – 7 to finish the regular season with a 4 – 1 record.  Mission enters the postseason as the district’s #1 seed in the Class 6A Div. I Region IV playoff bracket due to having a better record than Edinburg North, the district’s other Division I entry. Vela is the district’s #1 seed in the Class 6A Div. II Region IV bracket. The UIL splits teams from Class 6A into different divisions for the post season based on enrollment numbers among any given district’s four qualifying teams.

Detmer said his team has moved on from the Vela loss. “The team is good  . . . just full speed ahead for San Benito. Overall, for us, and the kids, we feel like we’ve had a very good regular season and (we’re) excited about moving on to the playoffs.”

Those of us who love high school football are excited as well. Playoff games in December!  ‘Tis the season to be jolly indeed!