It was the kind of game that the winning team and its fans really enjoy. The Mission Lady Eagles basketball team jumped out to an early lead and never relinquished it as they went on to defeat the Lady Huskies by a score of 69-25 at V. F. Neuhaus gym in Mission Tuesday night to improve their District 31-6A record to 3-2. With the loss, the Lady Huskies dropped to 0-5 in district play.

How dominant were the Lady Eagles? They led 17-6 at the end of the first quarter, 32-10 at the half and 52-16 at the end of the third quarter. In addition, Mission’s top scorer, Daniela “Moon” Munoz, came close to matching the Lady Huskies’ point total by herself as she led the way for the Lady Eagles with 22 points on the night. Other high scorers for Mission were Bailey Hernandez with 14 points, Hayley Garza with 12 points and Mayella Cantu with seven. Abigail Pena was the Lady Huskies’ top scorer with seven points. 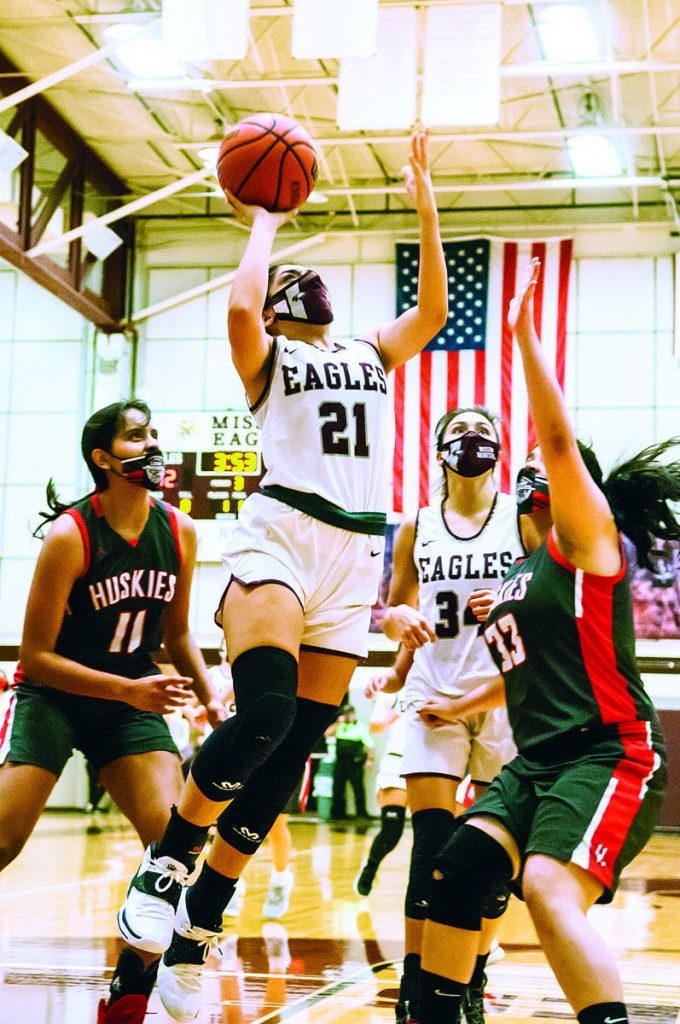 Mission’s Danielle “Moon” Munoz goes up for a
layup during the second half of the Lady Eagles’
69-25 win over the Juarez-Lincoln Lady Huskies Tuesday, Dec. 15, 2020. Progress Times photo by Luciano Guerra.

The Lady Huskies’ head coach, Irlanda Amador, was understandably disappointed in her team’s play immediately after the game when she said, “Inconsistency has been the problem. I have a lot of girls who are new to the program, so what I’m needing is to have the more experienced members of the squad motivate them in order to build the consistency we’re needing. We’ve had up games and we’ve had off games, like this one tonight. It’s that consistency that hasn’t been in place that we’re needing right now.”

In all fairness to Amador and her staff, they are handicapped by the fact that they’re missing several of their key players; players who would’ve almost certainly made their team much more competitive against the Lady Eagles had they been available to play Tuesday night.

“We have five girls that are out right now because of their grades and that’s been killing us,” Amador said. “They are five girls that I could rotate in and they could give me something as far as points and also something on defense. Right now I’m putting in my young players and that’s hurting us. But I need them to experience the varsity level as far as the speed and the effectiveness that they have to incorporate in regards to what we’re trying to accomplish right now.”

Building a program from the ground up takes time. Amador, who is in her third year as the Lady Huskies’ head coach, realizes that and she knows that there are better days ahead. As for the Lady Eagles, their head coach, Monica Detmer, is also in her third year on the job but unlike Amador, she is already seeing the fruits of her labor pay off as she and her girls have their sights set on a winning season and possibly even the playoffs.

“Our district is super tough,” Detmer said. “We have to go up against some really tough teams and every game is going to be a battle. Everybody is well coached, everybody is super athletic so I’m not taking any team for granted.”

“We didn’t make the playoffs last year,” Detmer added. “We won some games and lost some close ones. Basically, we were building. But this year we’re hoping to get into the playoffs.”

One motivational tool that Detmer is using involves taping a sheet of paper to each player’s game day chair with an adjective written on it. Adjectives such as energetic, focused, determined, aggressive and so on. What are these signs all about?

“It’s a little team-building thing that we do,” Detmer said. “Each game day morning you want your team to feel like it’s a special day and that they have something to look forward to. So every game we have a one word description that we want to be during the game. So every game day morning the girls give me a word that they’re wanting to represent in that game. So it’s all about what they want to be.”

The Lady Eagles built up enough of a lead against the Lady Huskies Tuesday night to give Detmer the opportunity to play gave every girl on her squad. That however is not a luxury she gets to enjoy as often as she’d like.

And what about the COVID-19 pandemic and how it has affected Detmer and her team? The fact that she is the wife of Mission Eagles’ head football coach Koy Detmer means that sports has always been a major topic of conversation in the Detmer household. But as a result of the pandemic, that conversation is much different this year.

“In our household sports is an everyday conversation, from football to basketball to all sports really,” Detmer said. “That’s all that we’re talking about at home. This is a different year and the conversations are completely different. The way you approach practices is different as are the games. But the people down in the Valley are such good people. Everybody is super helpful with trying to be safe with the kids. But it’s been a process and thankfully everybody is safe.”