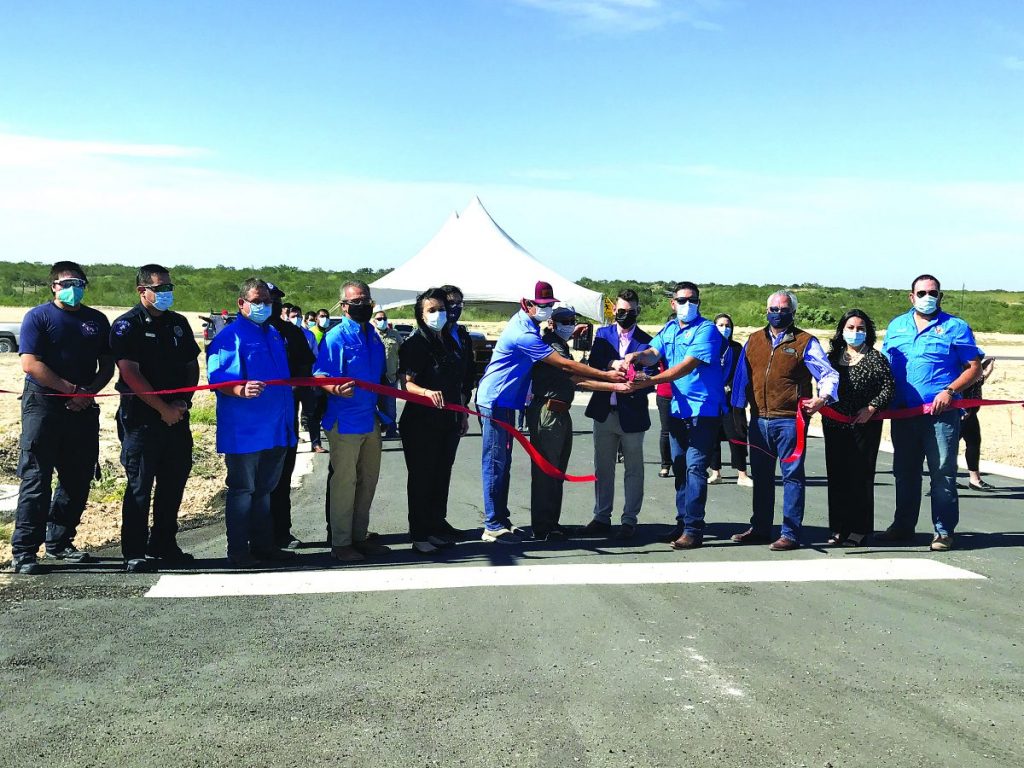 The Sullivan City commissioners and city leaders, along with the developers, cut the ribbon for the Salinas Estates subdivision. Progress Times photo by Jamie Treviño.

“What they’ve done for this city is incredible, this is the first development that we are doing in the city since we came on board,” Garcia said. “It took a lot of hard work, but eventually they pulled through and saw the future of what is coming into Sullivan City – from here we’re going to take off.”

According to Derek Janik, the Chief Executive Officer and Loan Organizer for Janix Loan Origination, there are several other projects underway in Sullivan City.

“We’ve got 135 acres here – this is Phase One, which is about 30 to 35 acres,” Janik said. “We’re going to be adding a lot of tax benefits for the city, along with growth, employment and businesses. That’s our goal.”

The ribbon cutting marked the completion of the first phase of a project in Sullivan City by Solares De Venta, and there are two more phases to go. 81 acres off of El Pinto Rd. will also be developed.

Janik said they chose Sullivan City because they saw just how much land is available in the area.

“We saw that there’s room for growth, so we decided to go ahead and meet with some of the city officials and they thought it was a great idea too,” Janik said. “We took our studies and said ‘let’s go for it, it can be done.’”

Garcia noted that opportunities are expanding in Sullivan City.

Janik noted that the lengthening of Expressway 83 has brought prosperity to neighboring cities like La Joya.

“We’re seeing that growth and what we can do to help [Sullivan City] out,” Janik said. “I think this is the best thing we can do. We’re excited.”

Garcia said the investors are smart for choosing Sullivan City as a hub of new expansion. He also thanked the workers for helping bring Salinas Estates up to code.

“We’re going to have sidewalks, and they’re not in yet, but the lighting is going to be here as well,” Garcia said. “For anyone who didn’t know the city of Sullivan, we didn’t have any curbs anywhere, this is the first development that actually requires curbs. We had to do it right.”

Council member Sylvia Castillo said she is glad to see new development in the area.

“I am very pleased, as a person being from Sullivan City, born and raised,” Castillo said. “This is our city, so I’m so proud and very happy that we are actually getting somewhere.”

Castillo said Sullivan City is growing “by leaps and bounds,” and projects like these are a priority.

“We want to eventually get to the point where we do have everything up to par, up to statute with curbs, gutters and drainage,” Castillo said. “Eventually, we will get there, but it’s going to take baby steps. With the help of the mayor, the commission, the city, constituents and everybody involved like the developers, thank you for considering Sullivan City. Hopefully we’ll be able to further extend subdivisions in Sullivan City.”

Garcia invited everyone to come out and look at the opportunities available in the city.

“If you know anyone, make them come into Sullivan, pressure them to come in and purchase out here,” Garcia said. “We’re going to grow, that’s a promise. We are growing.”

Following the ribbon cutting, the event concluded with a celebratory outdoor lunch. Salinas Estates will be move-in ready by mid-January, 2021, and the second phase will be ready one year later.