Those looking for a last-minute alcohol-related gift in your local liquor store in the last week may have come across a familiar sight.

On Monday, Brunette Bombshell, the flagship beer from the Mission-based 5×5 Brewing Co., appeared in local retailers such as H-E-B, Holiday Wine and Liquor and more. 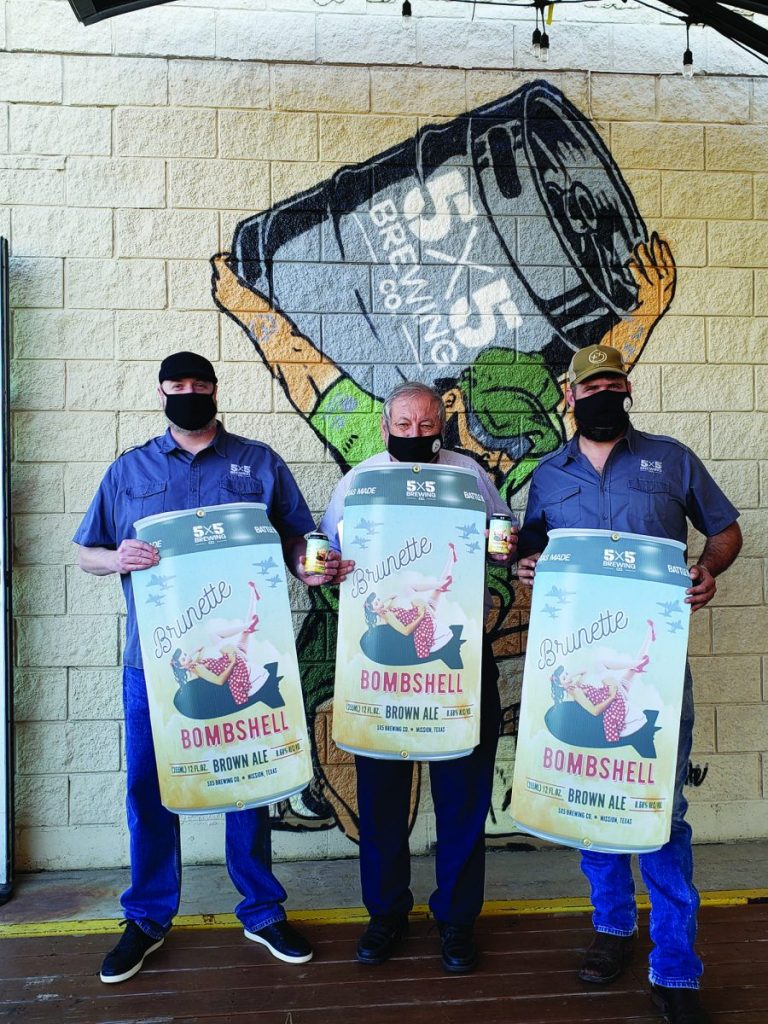 “It’s the first beer product from the Rio Grande Valley that is going out in heavy distribution all the way to El Paso, Victoria County and as far as Laredo,” George Rice, co-owner of the brewery said. “It’s big for us and turns us into a regional sized brewery with the product we’re rolling out.”

Rice made the announcement last week prior to the Monday launch into retail stores, which was made possible through an exclusive partnership with L&F Distributors. With the partnership, Brunette Bombshell and any future 5×5 Brewery products will be made available in as many as 45 counties in the state.

“We’re excited to have partnered up with 5×5 Brewing Co., we’ve been wanting this partnership for years,” Gabby Jones, a marketing director at L&F distributors said at the press conference. “The possibility of having packages of their beer at our facilities is amazing. We will be expanding our territory and people will be able to get 5×5 cans all the way to El Paso, South Padre Island and Victoria County. It’s an amazing footprint.”

5×5 Brewing Co. is the largest distributing brewery in the area and housed in the Mission CEED building. It is one of the businesses the Mission Economic Development Center has supported over the last few years and is the anchor tenant of the Mission Food Park. Mission EDC CEO Daniel Silva said he was proud of the success for the Mission-based brewery.

“George Rice and his crew have done an amazing job with production and we feel this is just the first step in a series of great things happening for 5×5. We are thankful to have this small business that is one of the city of Mission’s greatest success stories.” Silva said. “Located here at the Mission CEED, we’ve seen first-hand the incredible amount of work the team has put forth in coming up with new ideas to bring to the RGV. Now the rest of Texas will have the privilege of tasting Mission’s favorite beer.”

Rice said the beer would be sold in cans as a four-pack that will be manufactured at their facility in Conroe.

“It’s our flagship beer, it’s what put us on the map,” Rice said of the honey brown ale. “We thought it’d be fitting to have this beer out to market to let Texas know why we have one of the better browns in the country. The cans may be manufactured elsewhere but they will be made with our recipe and our guys will go there several times a month to inspect it, go through the batches and packaging to make sure they have the same quality as we do here.”

Rice said 5×5 is also in discussions to bring a second beer released to retailers by late spring.

Rice noted that this expansion of the brewery is a welcome change from when the brewery was forced to temporarily close its doors earlier in the year due to the COVID-19 pandemic. Rice at one point tested positive for the disease.

“We had to furlough 95% of our employees but now we’re coming out of COVID swinging,” Rice said. “It’s been a very trying time for us and other retailers so we’re glad that with our team we’ve been able to pivot effectively and make meaningful change and bring all our employees back to the payroll.”