After the COVID-19 pandemic almost ended their season early, the Texas School for the Deaf football team won the state championship earlier this month for the first time in the program’s 164-year-old history.

Among the athletes who make up part of the groundbreaking team is Jose Ismael Garcia Jr., 18, from Alton. He is the only person from the Rio Grande Valley on the team. 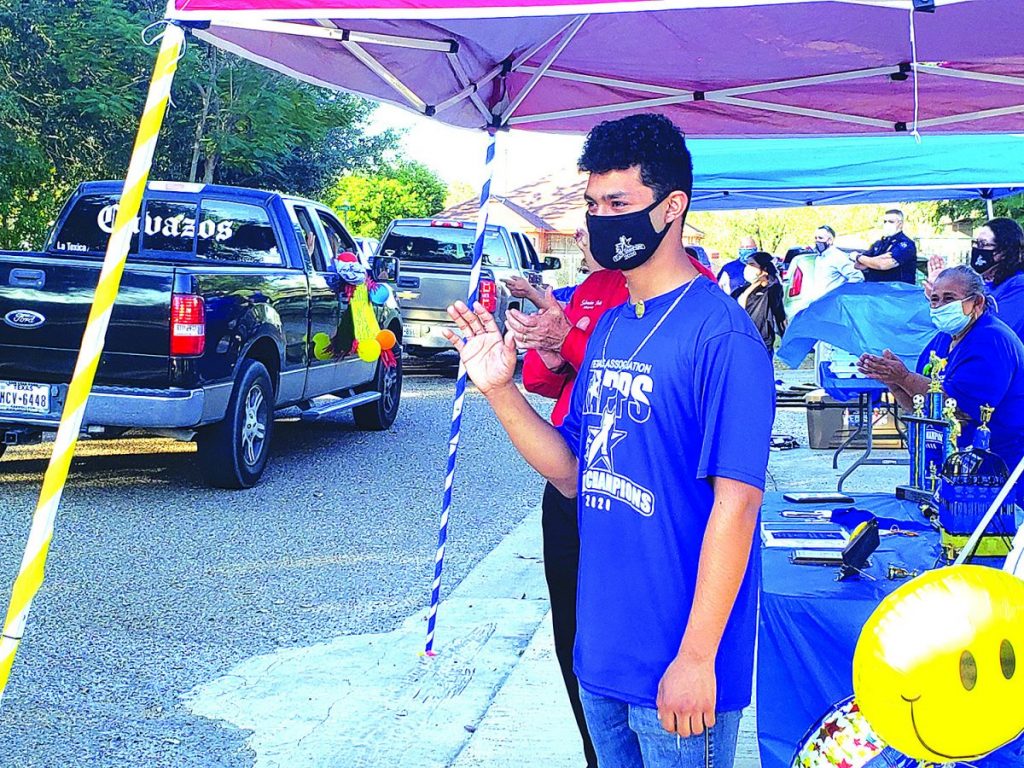 Jose Ismael Garcia Jr. waving to attendees at a drive-by parade in honor of his victory as a member of the Texas School for the Deaf football team after winning the state championship Saturday, Dec. 19, 2020. Progress Times photo by Jose De Leon III.

Garcia Jr., a junior at the Austin-based school, has played multiple sports throughout school from tennis, basketball, baseball, soccer and football.

He hasn’t let his loss of hearing deter him from playing.

According to his father, Joey Garcia, Jose lost his hearing when he was 1 year old after contracting a high fever and convulsions.

“It was hard for us to see the situation and how he’d be affected but he just kept playing sports as he got older,” Garcia recalled. “He’s always been active and just liked playing and competing. He’s an inspiration.”

Garcia Jr. was recognized in a drive-by parade outside his family’s home in Alton to celebrate his team’s historic victory. Family, friends and city officials stopped by to congratulate him on his success. Alton city mayor Salvador Vela presented Garcia Jr. with a certificate in recognition of him.

“It’s always a big deal when someone from our community receives an honor like this,” Vela said. “It’s awesome and the community should recognize one of their own.”

Garcia Jr. began attending the Texas School for the Deaf and participated in many of their athletic programs and won several awards that were on display at the drive-by parade.

The crowd was celebrating a victory that almost didn’t happen.

Due to the COVID-19 pandemic, the Division 1 11-member team dropped down to six due to a depleted roster of many athletes choosing not to play. With the new TAPPS Division I Six-Man classification, TSD adjusted to several changes such as an 80 by 40 yard-long field, higher scores and every player on the field being eligible to catch a pass.

The team is made up entirely of athletes who are either deaf or hard of hearing and an assistant coach will bang the drum once or twice to call out a play or a snap count, and the player will feel the vibrations rather than hear a call. The coaches and players all communicate through sign language on the field and from the sideline.

Veritas Academy on Friday, Dec. 11 was the first time the school has captured a state football title in any division. Veritas (9-0) is a state heavyweight in six-man football who has won state in 2015, 2016 and 2018, averaging 62 points a game this season.

player,” Garcia Jr. said “I’m nervous about all this attention but it’s cool to see the team get celebrated like this. We all worked hard for this to happen.”

With the victory, Joey Garcia knew his son needed to be celebrated.

“He was flying into town on

Friday and after we picked him up at the airport we told him we were throwing him a parade in our neighborhood,” Joey Garcia said. “He was so excited when we told him and he’s happy to be here.”

For Garcia Jr., the state championship is another victory he has achieved since he started attending TSD in 2017.

Garcia Jr. would always struggle at his school, a campus at the McAllen school for deaf students in the county.

“All his classes had non-deaf students and he had an interpreter but none of his teachers would wait for the interpreter to catch up,” Joey Garcia said. “He’d always come home frustrated and mad that he was failing his classes. At one point his teachers said he had the math and reading comprehension skills of a second grader.”

Garcia Jr.’s parents enrolled him at TDS after learning about it from a relative.

“Once we sent him to Austin, we noticed a big difference, even the parents who knew him from McAllen have said he’s matured a lot, he’s doing a lot better and they can tell just by seeing how happy he is.”

Garcia Jr. said he went from failing his classes to earning As and Bs on all his classes since he started attending TSD.

“It just felt like it was so much better at my new school,” Garcia Jr. said. “It became easier for me to learn and get excited for it while playing football.”