Regional final up next

The Sharyland Pioneer Diamondbacks did a bit of everything last night in their 77 – 64 Class 5A – Div. II Regional IV semi-final win over Georgetown East View at Buccaneer Stadium in Corpus Christi. They also did something that no other Sharyland ISD football team has ever done; the victory put the team into the fourth round of the state playoffs.

Up next is a match-up with the Liberty Hill Panthers in the Region IV finals and a chance to be one of the four Class 5A Div. II teams left standing in the state. The game is scheduled for Saturday January 2 at 5 pm at Heroes Stadium in San Antonio. Both teams are currently unbeaten in 2020. 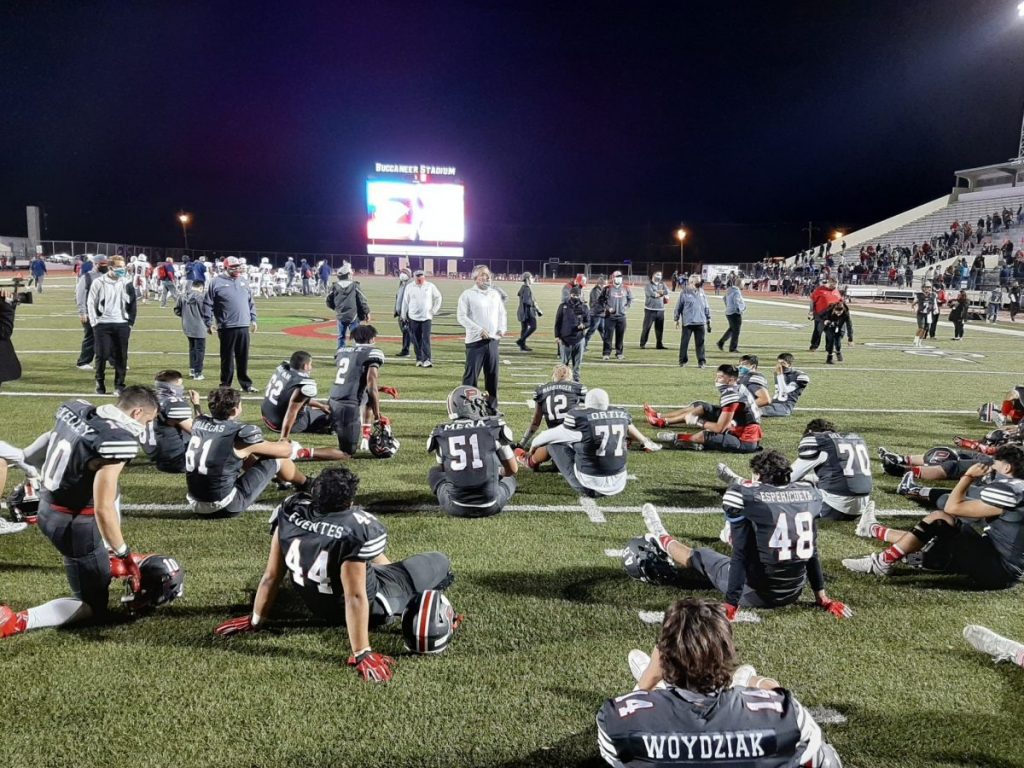 The Sharyland Pioneer Diamondbacks after their 77-64 victory over the Georgetown East View Patriots at the Buccaneer Stadium in Corpus Christi Saturday, Dec. 26, 2020. Progress Times photo by John Hamann.

As the final score would indicate the game was full of offense. East View scored on the third play from scrimmage on a long run from Isaiah Quinton-Jackson, the first of his five scores on the night. The Diamondbacks answered a little more than a minute later when Quarterback Eddie Lee Marburger found a wide open JJ Snyman down the sideline for a 39 yard score to tie the game at 7. After a defensive stand in their own territory to get the ball back, Marburger connected with Tristan Castillo on a 50 yard play that set up Marburger for a short rushing score and a 14 – 7 Pioneer lead. Quinton-Jackson tied it at 14 all with another long score for the Patriots with a little more than five minutes left in the first quarter. They would get no closer.

Over the course of the next 10 minutes the Diamondbacks offense would add four more touchdowns and their defensive unit would make three straight stops to break the tie and increase their lead to 42 – 14. The Patriots scored shortly before the half to make the score 42 – 21 at the break.

The third quarter opened with a long scoring run from Marburger, another defensive stop and a scoring pass from Marburger to Joseph Graham Jr. to make it 56 – 21 midway through the third.

A flurry of scores over the rest of the game turned the contest into something resembling a basketball game with its back and forth nature and large amounts of scoring. The two teams combined for 57 fourth quarter points. The Patriots actually closed the gap to 14 late in the fourth before another Marburger run sealed it. On the night, the senior rushed for six scores and threw for four more; leading the Diamondbacks to scores on their first six possessions and nine of their first 10. Graham Jr. would end the night with 2 touchdown receptions and Castillo found the end zone twice as well. Mike Ramos Jr. converted all 11 of his extra point attempts.

Pioneer coach Tom Lee had plenty of praise for his offensive unit. “The catalyst, Eddie, leading what we’re doing; but you can’t do it without the five offensive linemen and those guys blocked great tonight. Eddie had to scramble and he made some plays but that’s what he’s done all year.” Lee went on to praise the team’s core of receivers as well. “Everybody had some big catches.”

It would be easy to look at the final score and dismiss the Diamondbacks defensive effort but their stops in the first half were critical in securing the victory. The Patriots offense never seemed comfortable; having to work for everything they got. Through much of the night there was no place to run, no time to pass and often times, no receivers open.

“I know the scoreboard doesn’t say it,” said Lee, “but we played pretty good (defense) for three . . . , three and a half quarters. We got six or seven stops tonight and that’s what we wanted to do.”

The Diamondbacks are the first Valley team to reach the fourth round since Mission Veterans did it in 2018 and, most likely, the first to ever play a game in January. Another effort like last night may have them playing more than one as well.