The calendar has turned to 2021, something most of the world is probably happy to see. January 1st almost always brings feelings of renewal and restoration.  After what transpired in 2020 most of us are waking up today with some sense of relief as well. On paper, it is a chance to start over.

One group that isn’t ready to turn the page on 2020 is the Sharyland Pioneer Diamondback football team. That is, of course, because the 2020 football season, which didn’t start until October of last year for Pioneer, is still going. The teams’ 77 – 64 victory last week over the Georgetown East View Patriots in Corpus Christi advanced the squad into the fourth round of the Class 5A Div. II state playoffs where they will meet the Liberty Hill Panthers Saturday, January 2, 2021, for the Region IV title and keep alive the chance for a state championship. The game will mark the deepest playoff run by any Sharyland ISD football team in history. The game will be played at Heroes Stadium in San Antonio with kickoff scheduled for 5 pm. The Panthers are currently 11 – 0 on the year while Pioneer is 8 – 0. 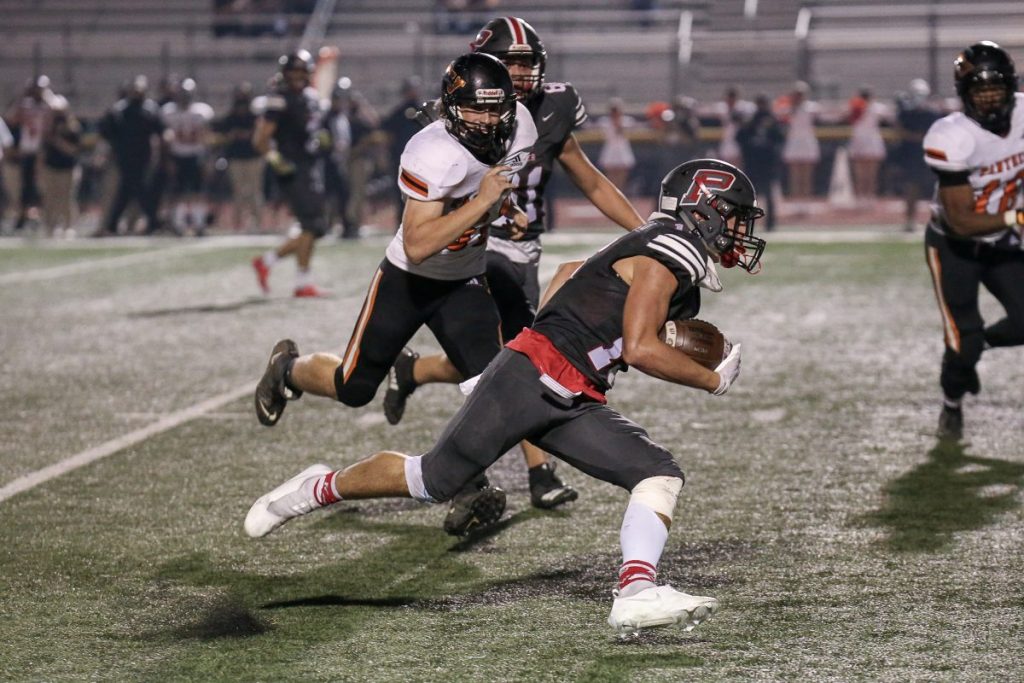 A big run from Tristan Castillo contributed to Sharyland Pioneer overcoming a determined Medina Valley squad 42 – 23 at Richard Thompson Stadium in Mission Friday night in the opening round of the Class 5A – Div. II playoffs. The victory improves Pioneer to 6 – 0 on the season. -December 11, 2020- Photo by: Mario Magallon

When asked about the message he was sending to his players about this week’s game, Pioneer coach Tom Lee’s response was short and to the point. “To believe”, said the third year head coach. “We have just as good an opportunity as Liberty Hill does to win this football game this week.”

They should believe. The Panthers feature a strong offense predicated on running the football, similar to Marble Falls, a team the Diamondbacks defeated in the second round of the playoffs two weeks ago. What has set Liberty Hill apart for much of the season has been their defense. Before giving up 42 points in their third round victory over Leander Rouse last week the Panthers defensive unit had surrendered only 59 points through nine games with six shutouts. One of the Panthers 11 wins was by forfeit. The Diamondbacks, however, run a similar style offense to the Rouse team that pushed Liberty Hill to the brink last week.

Putting up points is not a problem for Pioneer. The Diamondbacks’ offense has produced 173 points in their first three playoff games of the postseason and, if last Saturday night’s win over East View was any indication, they may be peaking at the right time.

In their latest win, the Eddie Lee Marburger run offense scored on 9 of their first 10 possessions. The one drive that didn’t produce a score ended on an incomplete pass in the end zone on the last play of the first half. The unit ran up a total of 733 yards of offense on the night, highlighted by Marburgers’ six rushing scores. The senior quarterback threw for four more.

After a start to the season that included one cancelled game and a long break to start the month of November, the Diamondbacks have now played six games in the last six weeks, something Lee sees as a big plus.

“That’s been crucial,” said Lee. “Not having any disruptions has been very nice for us; especially on the defensive side.” Lee also spoke about how the team has played only 8 games so far this season compared to what would have been 13 at this point in previous seasons. “It’s maybe going to benefit us in the long run.”

Lee also commented about the experiences of both last year and this year as a reason for their success.

“I think this all started last year after Boerne Champion . . . when we lost that heartbreaker over there in overtime. I just think our kids have a different mentality about how they approach the playoffs and the games.”

The team has battled back on several occasions starting with their third round playoff loss to Champion last year. In that game Pioneer trailed by 15 points before forcing overtime. They have trailed at some point in five of their last six games this season. The one game they didn’t was tied at the half.  According to Lee those experiences have prepared his team for what lies ahead. “I feel a calmness about us that no matter who we are going to get we have an opportunity to be successful.”

That calmness has manifested itself at least twice in the last two weeks. Tied with less than two minutes to go against Marble Falls two weeks ago, the offense marched down the field and scored the game winner with 12 seconds left. A late rally by East View last week, that cut the Pioneer lead to 14, was answered with a quick score.

The teams’ focus hasn’t changed either. When asked about his expectations for the season back in October Marburger said simply “Win a state championship; that’s the goal.” When I asked him again this week if those expectations had changed his response was simpler. “No sir.”

Don’t take that calmness and direct approach the wrong way however.  The players I spoke with this week  also mentioned  words like  “excited “ and “amazing” when asked how they felt about their history making accomplishments so far this season and what lies ahead. Senior defensive end Matthew Solis echoed similar sentiments. “It’s a great feeling,” he said. “It’s one more round . . . it’s a great feeling.”

The notion of the season extending into the New Year has not gone unnoticed either. “We were joking around earlier,” said senior running back Taylor Esparza. “Man, we don’t have another game until next year. Usually it doesn’t really happen in Texas high school football but, with COVID, this year was different. We’re excited about being one of the first ones to do that.”

Should the Diamondbacks keep winning, I suspect the excitement will only grow stronger.