Over 29 years ago, Lieutenant Homer Salinas fought his first fire.

Salinas was a reserve police officer in Mission when he witnessed a house fire on Glasscock Rd. When he saw them working to put out the flames, Salinas was in awe. 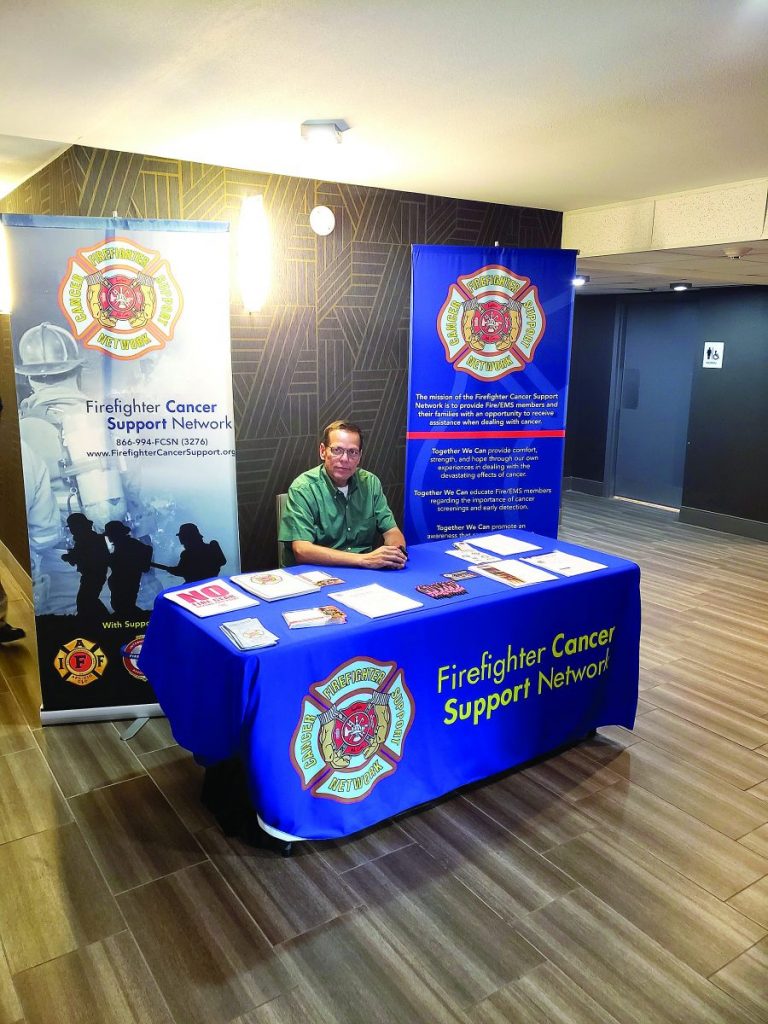 Mission firefighter Lt. Homer Salinas works a booth set up by the Firefighter Cancer Support Network, as a local representative in the Rio Grande Valley aiming to educate and make a difference in occupational cancer awareness and prevention. Photo courtesy of Lt. Homer Salinas.

“I wanted to be a part of that, I wanted to do that,” Salinas said. “It caught my eye, and once it gets into your system, you ain’t getting it out. It’s a part of you.”

Since then, the calling to serve has remained in his heart, and he started with two other departments. Salinas, who has been with the Mission Fire Department since 2002, is a cancer survivor on the journey to remission.

January is Fire Fighter Cancer Awareness Month, designated to honor the first responders who place themselves between crackling flames and the people they threaten. This month, the city of Mission’s department remembers three firefighters who have been lost to cancer, as well as an additional three currently in remission.

Salinas was diagnosed with renal cell carcinoma in 2017 and was treated at the MD Anderson Cancer Center in Houston. After defeating the cancer, he still returns for checkups on his status and other issues that have come as a result of his diagnosis.

“They’re monitoring it,” Salinas said. “I really liked that hospital from day one. It’s top-notch, the best hospital in the nation. It was an eye-opener, going from here to there.”

As research has developed in the last decade, occupational cancer has become more apparent, linked to the carcinogens still present on the suits and gear of firefighters across the country. A comprehensive study conducted by the National Institute for Occupational Safety and Health (NIOSH) collected data regarding cancer incidence among firefighters.

NIOSH found that cancer is the “most dangerous threat to firefighter health and safety today,” and “cancer caused 63 percent of career firefighter line-of-duty deaths from January 1, 2002 to December 31, 2017” based on additional data from the International Association of Fire Fighters. When Salinas was diagnosed, and faced a battle he never expected, he said the feelings were overwhelming.

“He told me I had a tumor, and it’s like my world was shutting down,” Salinas said, noting his first thoughts were about taking care of his family and worrying about who would be there if he passed. “You’re in disbelief. You always think it happens to someone else, it’s never going to happen to you. Life kind of slaps you in the face and stops you in your tracks when you hear that.”

Despite the heavy-duty gear and protective equipment, scientists and doctors have discovered that soot and cancer-causing particles can still be absorbed in the skin.

“They’re exposed to all these chemicals and carcinogens,” Salinas said. “You take that back to the station. Some people who are volunteers will take it home and then expose it to their families.”

Salinas’ love for the job and calling to help others in need has only solidified his career choice over the years, even through cancer.

“I love doing what I do,” Salinas said. “We’re so close in brotherhood, and it’s not the badge you wear, it’s all the departments. Anywhere I go, [other firefighters] will treat me like a brother.”

When Salinas was receiving treatment in Houston, members of the Houston Fire Department visited him.

“They helped me to take care of my family,” Salinas said. “They helped me to make sure that my wife had everything she needed, and I also had my brothers and sisters down here helping. We’re all one big family.”

Salinas’ family has been steady and supportive throughout the process – particularly his wife Nereida, an oncologist nurse who he credits for “helping tremendously” and never leaving his side so she could interpret medical jargon and explain the process of certain procedures.

“She’s my rock,” Salinas said. “I’m so grateful that she has the knowledge and the love to be there with me, standing beside me.”

Salinas’ eldest son, Omar Salinas, has also followed in his footsteps to become a firefighter at the Mission Fire Department, after pinning his father in 2002.

“I worry about him,” Salinas said. “My youngest son is a senior this year, and he wants to go into the Fire Academy.”

“When I put on my uniform, and I took my oath, I understood the risk involved,” Salinas said. “But now we’re getting cancer.”

Salinas said most firefighters strive for an excellent career and retirement, but find once they have retired they have developed cancer because of their line of work. The struggle of spending all one’s savings on cancer that developed because of their job is a tragedy that requires support from all angles, according to the first responder.

“We want to honor the people that passed away, but we also want to raise awareness,” Salinas said. “There is help out there. There’s simple things we need to do.”

As more research has been conducted, it has been found that there are ways to reduce the risk of occupational cancer as a firefighter. Complete gross decontamination of personal protective equipment (PPE) and gear in order to remove soot and other particulates, as well as using cleansing wipes while still on the scene, leaving PPE out of living and sleeping quarters, showering within the hour of a fire and annual physical screenings (with cancer tests) are all methods that can mitigate the possibility of developing cancer.

Salinas said he is glad to see the city of Mission Fire Department has adopted these practices in recent years.

“The city of Mission has recognized the problem and has gone forward to do things to make the department better,” Salinas said. “The fire department has implemented decon, implemented second gear, has bought extractors to wash our gear, given classes on how to protect yourself.”

Mission has also recently had their first test of the whole department in which doctors looked for varying types of cancers. Salinas said they plan to make it an annual event for the firefighters.

“We want to continue preventing,” Salinas said. “If we can catch it early like me, there’s a lot higher of a survival rate.”

As a survivor, Salinas continues to fight fire while volunteering as a South Texas mentor for the Firefighter Cancer Support Network. The network is set up for firefighters and their immediate family members who face the challenges of cancer.

“It’s not a job that is for everyone, but it’s a job that’s for me,” Salinas said. “I’ve already helped 11 firefighters who have cancer. Some of them have passed away, recently Sean Hemingway of Brownsville. They need help from all over.”

Salinas is able to share his experience as a survivor, and provide comfort, support, strength and hope to others going through the journey he has conquered. The Firefighter Cancer Support Network can be reached toll-free at (866) 994-FCSN, or at www.FirefighterCancerSupport.org.

“I got a second chance,” Salinas said. “I’m going to make a difference. I’m blessed.”