Criticism against President Donald J. Trump’s scheduled visit to the Valley was raised over the weekend  after news broke out of his planned tour of the border wall.

Trump is tentatively scheduled to visit the Valley on Tuesday where Trump would fly to Harlingen and tour the border wall, as previously reported.

Since news of Trump’s visit broke out on Saturday, several organizations and officials have commented on it. Some of these comments offered support, others caution, and one organization asking the visit be cancelled altogether. 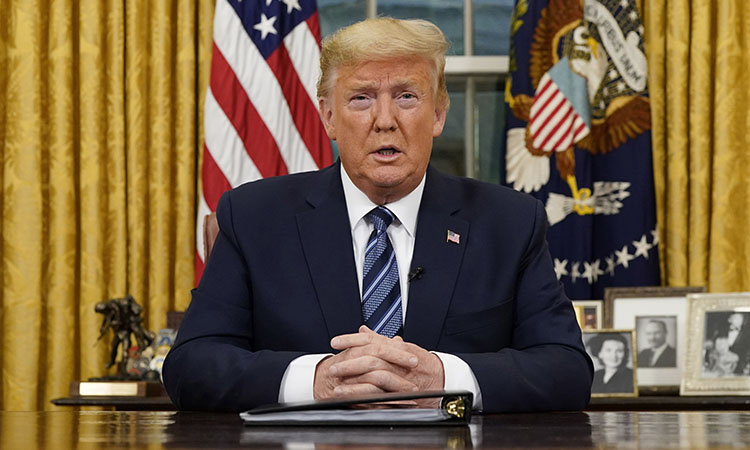 President Donald Trump speaks in an address to the nation from the Oval Office at the White House about the coronavirus Wednesday, March, 11, 2020, in Washington. (Doug Mills/The New York Times via AP, Pool)

On Sunday, the local non-profit La Union del Pueblo Entero released a petition urging the visit be cancelled and protested by local officials. The organization cited last week’s insurrection where supporters of the President stormed through the Capital, resulting in five deaths.

Since the attack, President Trump and other Republican officials have been accused of inciting the deadly violence, leading to Trump’s ban from several social media platforms such as Facebook and Twitter.

“We cannot allow Trump to bring his racist mob violence to the Rio Grande Valley,” LUPE said in a statement posted on social media. “He has used border communities to fan the flames of racist violence since day one in office. Local officials must denounce his visit, call on him to cancel, and refuse to coordinate his visit with DHS. Should any violence occur on Tuesday, all public officials who did nothing to stop this visit will be responsible.”

In a statement released Monday, Congressman Henry Cuellar (TX-28) urged the President to focus instead on the COVID-19 pandemic and the devastation it has created to the border.

“Unless he is coming down to focus on these critical issues, he is not welcome here,” Cuellar stated. “His finished product of about 25 miles of new border barrier has failed to do its job: stop or deter migrants from crossing the border. However, in efforts to fulfill his campaign promise, President Trump has wasted our hard-earned tax dollars, destroyed wildlife and public lands, jeopardized historical landmarks, and seized private land. On January 20th, we can begin to remedy the extraordinary challenges border communities have faced over the last four years due to the Trump administration’s insistence on constructing this ineffective and wasteful border wall. . .South Texas deserves better. America deserves better.”

Trump’s visit is planned to occur the day after House Democrats formally introduced their resolution to impeach Trump, charging him with “incitement of insurrection” for his role in last week’s deadly US Capitol attack, according to CNN. According to the outlet, the House will meet Wednesday to vote on impeaching President Trump for a second time.

Hidalgo County Judge Richard F. Cortez urged the community to keep the COVID-19 pandemic in mind as Trump sets foot in the area.

“We must remember that we all have a common and far more dangerous enemy: the COVID-19 virus. Our focus should be more on addressing this deadly threat than creating new threats amongst ourselves over political disagreements. If you choose to exercise your First Amendment rights, please do so peacefully and wear a facial covering while being mindful of physical distancing,” Cortez stated in a Monday release.

“Passions are running dangerously high among supporters and opponents of President Trump. I urge both sides to keep those passions in check because ultimately the Rio Grande Valley has a unique opportunity to demonstrate to the world that peaceful public discourse is far more effective than public violence,” Cortez said.

On Monday morning, McAllen Mayor Jim Darling was the latest public official to comment on Trump’s scheduled visit. Like Judge Cortez, Mayor Darling asked the public to be peaceful during any demonstrations.

“I understand that emotions are high on both sides, for or against, the President and I hope that if there are demonstrations for or against, that they are peaceful with respect to our law enforcement personnel,” Darling said in a statement.

Seemingly the only organization that expressed enthusiasm for Trump’s visit was the Hidalgo County GOP Party, which said in a statement Saturday that although they’ve yet to be contacted about the visit the local party offers the President their support.

“[We] would like our President to know that we support him, have been praying for our Country and appreciate his leadership,” the organization said.

By contrast, the Hidalgo County Democratic Party criticized Trump’s incoming visit and cited the RGV’s recent re-designation as an area of high hospitalizations amid a pandemic.

“You know many of his supporters will have rallies and show up where he goes, mostly maskless, and likely angry, as we have recently seen in DC. There is no scenario where this ends in a positive fashion, nor is there any real benefit from his visit,” the party said in a social media statement made Saturday.  “At a time when hospitals are overwhelmed and our front line healthcare workers are exhausted, do you think this is a good idea? I do not, and hope that you will take measures to ask President Trump NOT to come, or take other measure to adequately protect the health of your constituents.”