Koy Detmer is leaving Mission High School again. The first time, in 1992, was expected. The newly graduated high school student was off to college. The second time, set to happen in the near future, was not.

He is, however, moving on to another challenge. Somerset High School near San Antonio hired Detmer earlier this week for the position of head football coach. 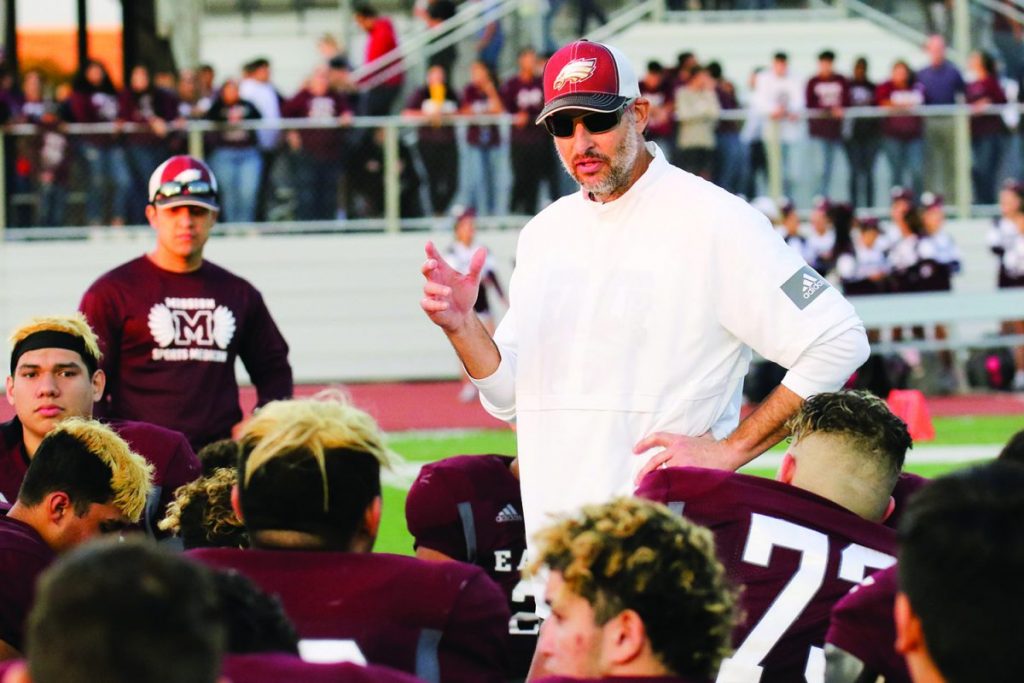 Meeting challenges is a theme that runs through the, now former, Mission High head football coach’s life. His ability to do so has greatly benefited those who are fans of the Mission Eagles football team on two different occasions.

When Detmer first arrived in Mission in the spring of 1989 he was finishing up his freshmen year of high school. His dad, the late Sonny Detmer, had just been hired to take over a rejuvenated football program; one revived by a pass-first offensive philosophy most in the Valley were not accustomed to.

The younger Detmer was a quarterback whose older brother Ty was playing the same position at Brigham Young University. His dad had been hired, in part, because his system of play fell in line with what had placed Mission High football back on the map; passing the ball.

The team inherited by Coach Sonny Detmer was coming off three straight playoff appearances under the guidance of David Lee and Rusty Dowling. Expectations were high for both Koy’s father and anyone who would be filling the quarterback spot. The memories of the exploits of Eagles quarterbacks like Lupe Rodriguez and Andy De La Garza were still fresh in fans minds.

Koy Detmer didn’t make an impact immediately, he spent most of his sophomore year on the sophomore team; but by the time he graduated both he, and his father, had more than answered the challenge they faced upon arriving.

The two led the Eagles to playoff appearances in 1990 and 1991 with Koy putting up huge numbers running his father’s offense. The 1990 squad advanced to the fourth round of the playoffs and the ’91 team finished the regular season undefeated.

After graduation, Koy played four years at The University of Colorado, followed by a career in the NFL as a member of the Philadelphia Eagles. Following his father’s footsteps came next.

Koy spent six plus seasons as an assistant to his father in Somerset before being hired to come back to Mission in February 2016 as head coach. It would be a dual challenge. Not only would the job be Koy’s first as a head coach; in the time after his graduation, his father had climbed to the top of the list in Mission High’s football history for victories (68) and playoff appearances (6).

Koy’s five years at the helm of the Eagles have been solid to say the least. Before his arrival the Eagles had not been to the postseason since 2012 and had last won a playoff game in 2009. After a three win season in his first year and a four win total in his second, Detmer guided the Eagles to three straight playoff appearances, compiling a 21 – 8 record in those three years. He leaves with an overall record of 28 – 21 and a .571 winning percentage that is second only to his father among coaches who spent five seasons or more leading the Eagles. The three playoff appearances rank second to his dad as well.

Sonny Detmer passed away in September of last year while still at the helm of Somerset. The elder Detmer was as much of a presence at Somerset as he was at Mission, if not more. He had only three sub-.500 seasons in his twenty total years coaching the Bulldogs. Detmer coached at Somerset at two different times in the early and mid-1970s, once again in 2002 and from 2007 until his passing. The team went 2 – 7 in 2020 as part of District 14 – 4A Div. I and last made the playoffs in 2018.

Koy Detmer commented that the Bulldogs will have a lot of returning players, including his son Koal, and several that he already knows from his first stint at Somerset. Kids he taught in his elementary school physical education classes. “We’re really excited about the potential and possibilities going up there.”

The move is about more than football however. “It has to do with our family”, said Detmer. “With Sonny passing . . . all of those things; we went through the season and got through that. Over the holidays going up and being around family . . . going back up there during that time and reflecting. Circumstances had changed and you truly could feel and see that there was a void there. We need to go back there and fill that void. It only happens right now. We could wait a few years but it’s happening now and you’re either going to be a part of that now or you’re not. That time for us is right now to go up there and it’s the right thing for us to do.”

The town has memories for Detmer as well. “When my dad was first coaching it was his first head coaching job. Growing up that was a place that Ty and I went in and out of the locker rooms and under the bleachers. In a sense it was also a place where I grew up. Being a coach’s son we’ve been in different places so in a way you have several different homes; Somerset is another one of those kinds of places. It’s where I got my start coaching in high school. It was a special place for us then, for our family.”

Detmer also acknowledged that leaving Mission won’t be easy. “Mission, for me, is a special place. It’s home. It’s where I went to high school, and graduated from. So being my alma mater, like that, it’s special. But it’s also special in the way I feel it’s where I kind of, you know, it was my launching pad you know. Also, it was a place where we had great success down here in high school and, you know, allowed me the opportunity to go on to the next step. And from there go on from there. But it all kind of started here in Mission and so it’s a special place; a special place for our whole family. It’s hard pulling away from here and all of those things, knowing what we’ve built, the relationships, the team, the bond, all of those kind of things, and how supportive in all those things everybody has been. It’s been a great experience.”

Detmer will take that experience back with him as well.

“We’re going to have the same message with those kids. (We’re) going in it to win a championship and go get after it and work at it that way. That’s going to be the goal and the expectations.”