Several dreams were represented and displayed at the 2021 Product Costume Show, put on by the Texas Citrus Fiesta, including that of Leyana Lee Gonzalez, who took first place in the Teen Division.

Part of the tradition of festivities, the Product Costume Show is a competition featuring unique artwork created in a style that has been preserved for over 80 years. Handmade costumes composed of citrus and valley-grown products are covered in flowers, leaves, oranges, grapefruits, lemons and vegetables that have been dried, shredded and pulverized into a powder form before being glued and dyed onto the fabric. 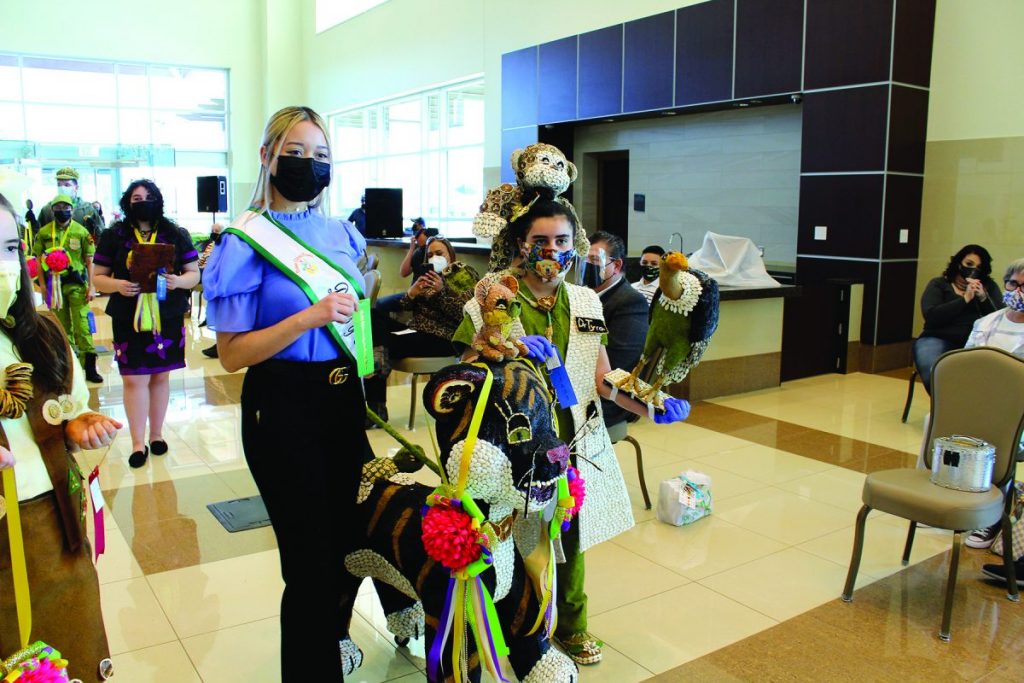 Tyra Alvarez, the model displaying her dream of being a veterinarian for zoo animals, walks the runway at the TCF Product Costume Show wearing a costume designed by Dalia Vivian Saturday, Jan 16, 2020. Progress Times photo by Jamie Treviño.

The Product Costume Show is broken down into primary elementary, teen and adult divisions, and also features a hat competition for designers inspired to use Valley products on creatively-constructed headgear.

This year, the Product Costume Show was held at the Mission Event Center on Jan. 16, 2021. Audience chairs were placed socially-distanced in the main lobby, masks were required and temperatures were checked upon entry in response to the COVID-19 pandemic.

The judges of the competition were Claudia Garza, Irma Dillard-Solis and Shane Gagnet, who all have years of experience with the Texas Citrus Fiesta. As photographs were taken, proud designers and parents watched the competitors walk the makeshift runway and pose in the way their dream personas would have.

Jovita Garza created and modelled a dress, shoes and accessories made out of dehydrated lemon, orange, lime and grapefruit leaves, pumpkin seeds, dehydrated red bougainvillea, dried maple leaves, dehydrated sunflowers and sunflower seeds, half slices of limes and bougainvillea. She was inspired by the story of a young girl who, through her modeling, raised money for a child who had to undergo facial reconstructive surgery.

Alyssa Navarro created a uniform, tennis racket, tennis ball, visor and shoes out of crushed lemon, tangerine and grapefruit peel, orange and tangerine, pink bougainvillea and acorns. She was inspired by a story of a girl named Caityln who dreamed of becoming a tennis player who played at Wimbledon.

Leyana Lee Gonzalez created and modelled a professional suit, tablet and shoes made out of burnt crushed citrus, bright crushed and dehydrated purple bougainvillea, pumpkin seeds, dehydrated orange slices, palm husks and dried and crushed onion peels. Her dream has always been to make a difference in the lives of children, so she chose to create a costume modelled after a social worker.

Myling Landez created a flight attendant’s attire and shoes, made out of crushed tangerine peel, crushed orange leaves, dried orange slices and crushed lemon peels.  She was inspired to make something for “Flight 2021,” and take everyone somewhere that their dreams could blossom.

Adult Division (20 years old and up)

Jocelyn N. Guerra created a hat as a way to cope with the unfortunate events COVID-19 has brought into her life, and show she can control her dreams and future in the medical field. Her hat, modelled by Jenna Loya, was made out of dehydrated grapefruit crushed into a powder, white onion peel, several combinations of bougainvillea that were dehydrated, dehydrated sliced limes, lemons and oranges, lemon peel, crushed onion peel, blended and whole palm tree seeds and strands, dehydrated purple onion, orange pulp and oak tree seeds. 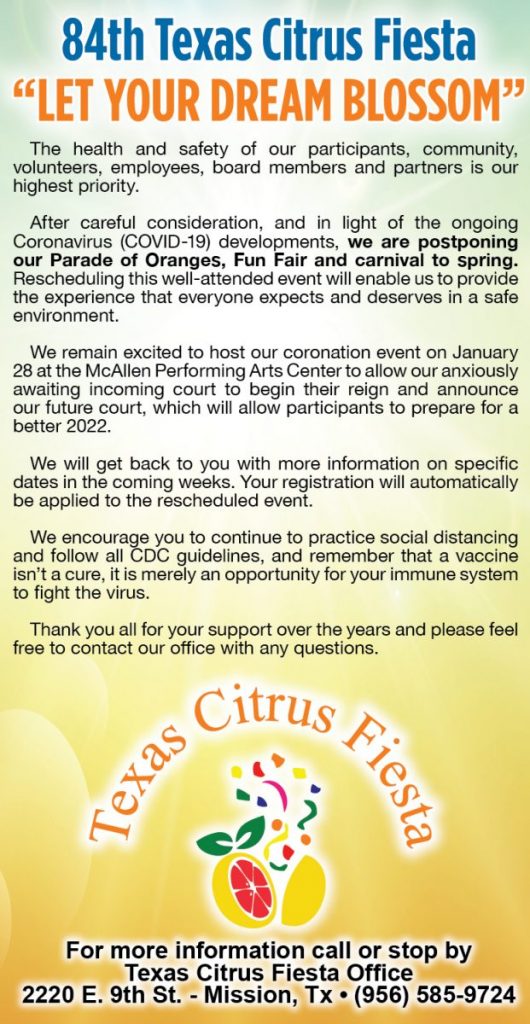 Jovita Garza donned and created a hat for a woman interested in strolling the area and birdwatching. Her lucky hat, which coincidentally allows her to see the rarest birds every time she wears it, is made of orange, lemon and grapefruit dried leaves, purple bougainvillea dots, slices of parched ruby red grapefruit, red bougainvillea, dried sunflowers and a dried lemon branch.

Myling Landez structured her graduation cap for the hat competition, symbolizing the academic accomplishment of a job well done. Modelled by Alyssa Navarro, it was made out of crushed orange leaves, lemon seeds, small petals of crushed orange and lemon peel and crushed tangerine peels.

Leyana Lee Gonzalez, the 15-year-old teen who won, has been competing in the Texas Citrus Fiesta Product Costume Show for eight years. She attends Mission Collegiate High School, and was inspired to make her costume because of her love for children and future goals of helping them out as a social worker.

“I think it’s great, contributing to traditions and keeping them going for this long, it’s fun,” Gonzalez said of her participation in TCF. “It feels great [to win], and I love kids. If I can help them in any way, I’ll take it.”

Jovita Garza, Alyssa Navarro, Aurora Judith Austin Fernandez and Sandra H. Martinez were all awarded for their notable participation in the traditional event. Dalia Vivian, Tyra Alvarez and their zoo animal veterinarian costume won the People’s Choice award, voted on by members of the audience during the showcase.