Other teams positioning for postseason

As the 2020–2021 boys basketball season approaches the February 16 deadline for certifying district playoff qualifiers there a number of Big 7 teams still fighting for one of the four spots from their respective district that will take them to the postseason.

One already knows it has made it. The La Joya High Coyotes (12–2 in district) have secured at least a share of the District 31–6A title even though a loss to Edinburg Economedes Tuesday night stopped their 12 game winning streak and kept them from securing it outright. They can still do that with a win tonight against Mission High or next Monday against Edinburg Vela. A loss by Economedes in either of their last two games would hand the outright title to the Coyotes as well. 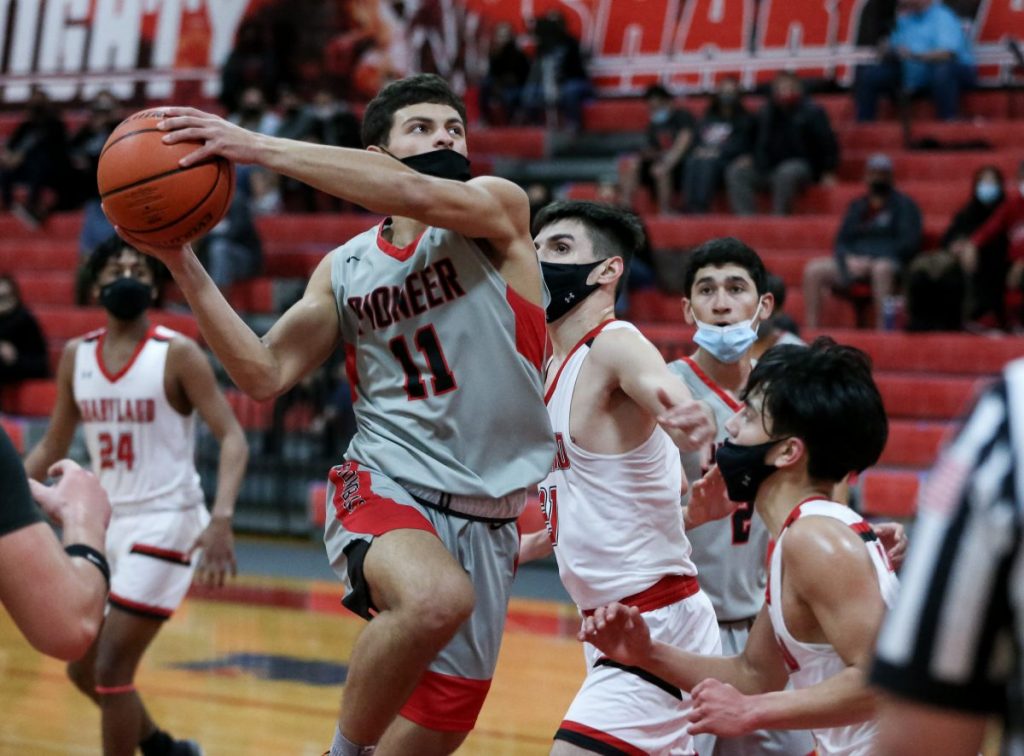 Head coach Eric Montalvo said the team was excited about their accomplishments so far this year. The district title is the first for the Coyotes since 2005. The team’s five starters (Ethan Moya, Bernie Vera, Cesar Villarreal, JC Barrientos and Mikey Saenz) were all part of last year’s playoff squad. Montalvo said his team was already moving on from Tuesday’s loss and had a good practice on Wednesday morning as they prepare for the rest of the regular season and the postseason. Tonight’s game against the Eagles is scheduled to tip-off at 7 pm at La Joya High School.

In District 31–5A, the boys’ basketball version of the Snakeskin Classic took place last Friday at Sharyland High School with both Sharyland High and Sharyland Pioneer fighting to stay in the picture for a playoff spot. Pioneer’s 57–56 victory over the Rattlers moved them one step closer to what would be their third straight postseason appearance. Even with the loss the Rattlers, who haven’t qualified for the playoffs since 2015, are still in the picture.

Both teams faced overhauls of sorts coming into the 2020-2021 season, having lost numerous players to graduation after last year. Pioneer returned only three players from last year’s regional semi-finalist team and the Rattlers lost both first and second team all-district picks from their 2019-2020 squad to graduation.

Each team had less than spectacular starts to this season. Sharyland High started the year with three losses as part of their 2–6 non-district schedule and then lost their first two district games. Pioneer opened their season with two defeats and finished their non-district schedule at 2–2. They started district 1–2. Each team, however, came into the match-up on four game winning streaks to stay in the postseason conversation.

Pioneer head coach Rene Gonzalez said that one key keeping the team in contention has been getting his players to know each other and having his newcomers gel with his experienced players. Gonzalez went on to emphasize the need for his senior class returners like Miguel Angel Gonzalez, Mike Ramos Jr. and Seth Rodriguez to lead and for everyone to buy into the system that has made Pioneer one of the area’s better teams over the past few seasons.

Rattler’s head coach Danny Moran credited his team’s current streak to finally getting time to play together in the midst of the numerous interruptions this season has presented and the return of players Blady Cavazos, Emilio Hinojosa and Benji Valdivia, who were playing football until early December. Valdivia missed all of last year due to injury as well. Moran also credited his team’s unselfish play and efforts on the defensive end of the court as other contributors to their recent success.

The game itself started with a frantic pace that produced a number of turnovers from both sides as each trip down the floor by either side was met with solid defending. Pioneer broke a 15–15 tie after the first quarter with a 16–3 run in the second to go up by 13. Jose Ortiz and Rodriguez fueled the run with seven and six points respectively before the Rattlers own 9–4 run cut the Diamondbacks lead to 35–27 at the half.

Pioneer stretched the lead to 12 twice in the third quarter thanks to Gonzalez , who opened the quarter scoring the Diamondbacks first nine points and hit a jump shot as the quarter ended to make it 50-38.

The Rattlers responded with a 14–3 run in the fourth, cutting the lead to 53–52 on a basket from Ricky Cantu. Valdivia and Cavazos scored seven and five points respectively during the comeback and the Rattlers had several opportunities to either tie it or take the lead before a Gonzalez free throw with just over 10 seconds left put the Diamondbacks up by four. Edgar Hernandez’s three pointer at the buzzer for the Rattlers ended the nights scoring.

Gonzalez led all scorers on the night with 23 and Ortiz added 18. The Rattlers were led by Valdivia with 18 and Cantu with 11.

Another Diamondbacks win this past Tuesday night over PSJA Memorial has improved their district record to 7–2, currently good for third place in the district. Their next scheduled game is tonight at home against McAllen Memorial at 6:30 pm. The loss to Pioneer dropped the Rattlers to 4–3 in district and into fifth place in the standings with seven games left to play. Their next scheduled game is a rematch with the Diamondbacks at Pioneer High School tomorrow night at 6 pm.

In District 30-5A, La Joya Palmview and Mission Veterans, who both made the postseason in 2019-2020, came into this week with only one district win each. The Patriots , however, beat the Lobos on Monday and followed that up with a win over Rio Grande City Tuesday to even out their district record at 3– 3 and into the top four with four games left in the regular season. They were scheduled to play last night against Roma and tonight at home against Laredo Cigarroa. Patriots head coach Jose Ramos, much like Moran, cited the importance of getting more court time with his team as being a factor to their turnaround. He also credited the play of Jacob Arenas and AJ Gonzaque along with the return of Ryan Acevedo and Ethan Zamora for the team’s recent success. Tonight’s game is scheduled to start at 6 pm.
Palmview is now 1– 6 in the six team district but a win tonight against Roma (6 pm at Roma High School) along with another in a rematch against the Patriots next Tuesday could get them back into the postseason picture.

Both Mission High and La Joya Juarez-Lincoln in District 31–6A have two regular season games left but will not qualify for the postseason.