For the 84th annual TCF, the year marked one full of changes for the celebration.

For one thing, the Mission school district – which hosts the organization’s coronation to crown King Citrus and Queen Citrianna at the Mission High School Gym – declined to host the event due to concerns regarding the COVID-19 pandemic. 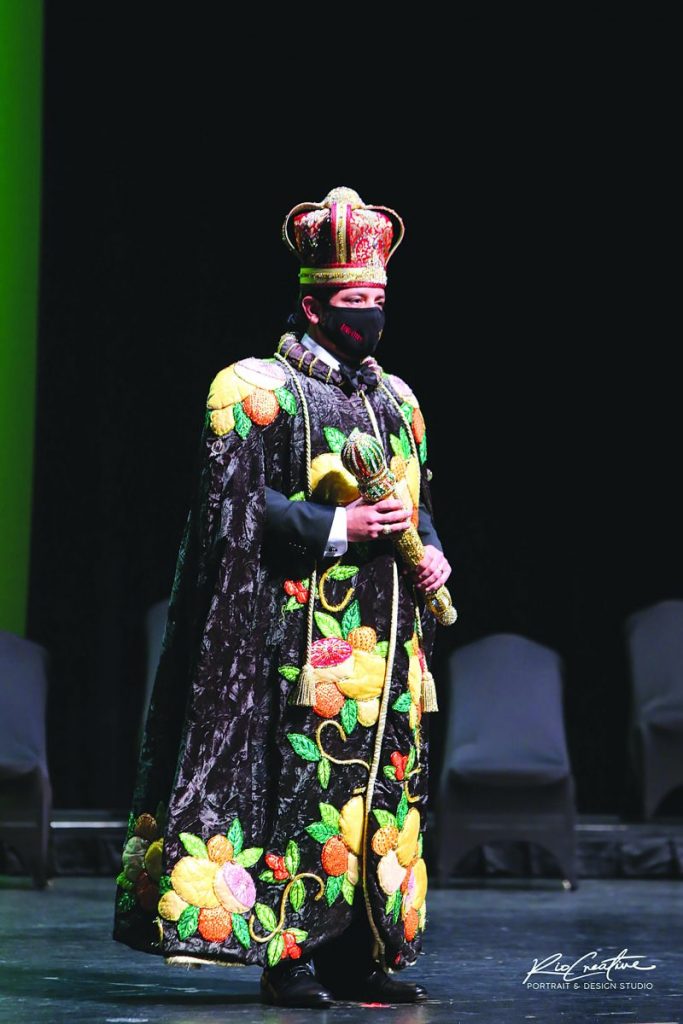 The organization would later announce they were postponing their annual Fun Fair, carnival and Parade of Oranges until later in the spring, making Thursday’s event one of the few that went on as scheduled when the McAllen Performing Arts Center stepped up to host the event.

The usage of face masks and social distancing was encouraged as even the members of the TCF Royal and Tangerine Courts and the duchesses wore masks along with their elaborate gowns.

“It’s bringing a sense of normalcy during these crazy times, I’m happy to see they’re still doing it,” Lone Star Citrus Growers VP TJ Flowers said of the event. “It’s good for the girls to be able to do this, they’ve put a lot of time and effort into these pageants and they get to continue to see the end of this journey for them.”

As is tradition, the King’s Association – made up of previous kings – selected a local individual in the citrus industry to reign as king over the Texas Citrus Fiesta. This year, that honor went to Flowers, 42.

For Flowers, TCF royalty literally runs in his blood.

“My dad Judd Flowers was King Citrus in 2004 and my sister, Summer, was Queen Citrianna in 2006,” Flowers recalled, adding that his daughter was named to the TCF Tangerine Court in 2016.

“I’ve been involved in supporting the organization over the years and didn’t think I’d be elected king,” Flowers said. “I’m very happy and honored for this role.”

Raised on a ranch north of Edinburg, Flowers was born into the family business of citrus and cattle. He attended Edinburg North High School and was part of Texas A&M’s class of 2003 where he earned degrees in history and political science. In college, he joined the university’s Corps of Cadets and eventually became the company’s first sergeant.

Shortly after marrying April, his college sweetheart, he joined his dad in creating their own produce company together – Lone Star Citrus Growers in Mission.

The company has sold nearly 20 million cartons of citrus over the last 14 years.

“Our family works together in the citrus industry, I’ve been here since the late ‘70s so to have my children grow up in the business and have my children help operate it is a very satisfying reward for the effort we have put into it,” William Judson “Judd” Flowers said. “We are tying our career with an industry related to the TCF. The organization has a long history so to be honored and accepted as a king is a big honor, we’re thrilled that now TJ has that honor.”

For Judd, the TCF is one of many meaningful traditions he has instilled in his family, he said.

“And now we have another generation coming up that has bought into the tradition of the citrus fiesta and we look for them to continue carrying this tradition forward,” Judd said. “It’s a beautiful thing and with more granddaughters coming in all the time, I’m sure the tradition in our family will continue.”

Flowers said he feels honored to be working alongside his father and to be following in his footsteps.

“I’m excited, I’ve had the opportunity over the years to participate in TCF with other family members. I’ve been through a few of these and didn’t think they’d elect me king so soon but I’m actually very happy and honored for this role,” Flowers said. “Citrus has been here longer than the TCF organization, so it has some staying power. This industry is here to stay and will continue to stay.”