As is tradition in every annual coronation, the Texas Citrus Fiesta names the members of the Royal Court for the festivities set for the following year to give them enough time to prepare their royal gowns.

Following in Kaylee Ann Silva’s footsteps was Duchess of Live Oak Brianna Lee Villasano of Lin-San Manuel who was named Queen Citrianna for next year’s TCF. 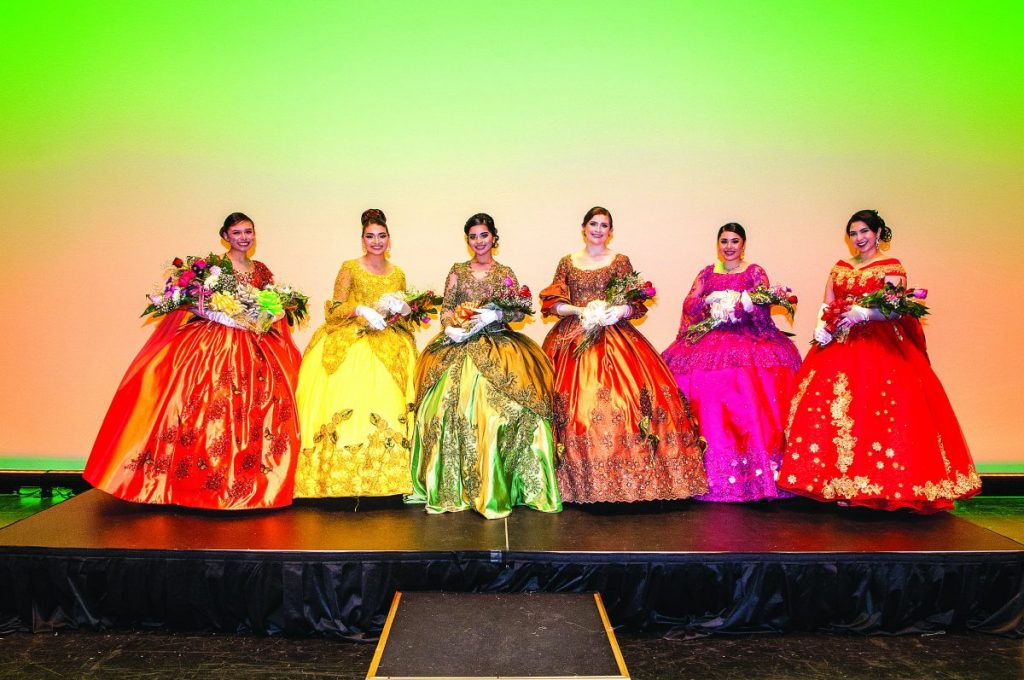 Villasano, a junior at Edinburg North High School, said she was honored for this recognition.

“I’m blessed, it’s been an amazing, crazy journey,” Villasano said, adding that it was a difficult year of preparing for the TCF pageant while balancing being a student. She is in the Top 2% of her class and is president of the Edinburg North FFA Chapter and enjoys volunteering in her community.

“I also had FFA as part of my schoolwork,” Villasano said. “It was a challenging year, nothing like anything I’ve experienced before, so it’s such an honor to be recognized this way.”

Villasano also remarked on the fear she and other duchesses in contention for a spot on the royal Court were fearful the pandemic that had infected over 63,000 Hidalgo County residents would put an early end to the celebrations.

“When the Mission school district cancelled on us, we had no idea what would happen next,” Villasano recalled. “The girls and I were panicking and thinking, ‘there’s no way we’ve worked this long and hard for it to end like this.’ But thankfully the committee pulled through for us.”

Villasano is the daughter of Mr. and Mrs. Edgar Villasano and wore a full-length ball gown of moss green and coffee brown silk taffeta with a fitted bodice and a dropped waistline whose colors represented the trunk of the live oak tree she represented.

Villasano was joined by Duchess of Lemon Danielle Leeann Silva, who was named Princess of Grapefruit Blossom.

She was named Miss Weslaco 2020 and homecoming Queen at her school in the same year and is a member of the South Texas Youth Congress and the National Honor Society.

She called her title a shock.

Silva chose a lemon-yellow colored full-length ball gown of silk shantung to wear at the coronation. The front and back of the fitted bodice had a scooped neckline covered in Chantilly lace. The circular flounce cut sleeves of the dress were embroidered with more Chantilly lace that was tied three-quarters of the way down with two handmade and embellished sliced lemons and green leaves.

The Edinburg native is the daughter of Mr. and Mrs. Benjamin Hill and is a junior at Sharyland Pioneer High School. She is the 2021 team leader for the Leukemia-Lymphoma Society Student of the Year Campaign, a Texas FFA State Champion in public relations, and competes in the local volleyball team RGV Venom and competitively exhibits cattle.

As the duchess of Grain Sorghum, Hill represented the unincorporated area of McCook northwest of McAllen city limits.

“It feels amazing,” Hill said of her title. “I’ve always wanted to be a part of something like this since I was little. I ran for Princess Anna and didn’t get on the court then and that made me strive to do better when I was older.”

Hill says she has a competitive edge that drove her to do her best at the TCF pageant after the pandemic cut short several of the events she was competing at in the last year.

“One of my major livestock shows I was competing at and my volleyball season was cut short,” Hill recalled. “With so many things postponed and nowhere to put this competitive drive I did my best to channel it into the pageant and that led to so much hard work and studying that led to me being part of the court.”

Hill represented McCook in a copper colored ball gown of iridescent, raw silk. The fitted bodice of the gown had a sweetheart neckline that was completely covered in lace and embroidered with a bouquet of gold, bronze and brown colored Swarovski crystals.

Duchess of Oleander Abigail Christine Bazan-Ochoa represented the city of Palmhurst and was named Lady-in-waiting for the 85th annual TCF Royal Court.

Bazan-Ochoa is the daughter of Mr. and Mrs. Vicente Ochoa Jr. and is a senior at Sharyland Pioneer High School where she is a three-time UIL Spirit State Champion.

She is a UCA All-American Cheerleader and the Sharyland Pioneer homecoming queen. She called her new title a “blessing” after the event.

“I’ve never seen myself in this situation and now I’m the first from Palmhurst to get on the court,” Bazan-Ochoa said. “This is my first time competing in a pageant in general since I was named 1st runner up for Princess Anna on the Tangerine court many years ago so getting on the Royal court on my first time since then felt like part of God’s plan.”

Bazan-Ochoa noted that the other members of the Royal Court were from the same dressing room she was in.

“All us girls talked before the event and said that if one of us made it to the court it’d feel like we all got it and now all of us ended up getting it,” Bazan-Ochoa said.

At the coronation, Bazan-Ochoa wore a two-piece, full-length ball gown of Fuchsia polyester taffeta. The front of the fitted bodice has a square neckline and empire waistline with a bodice heavily beaded in fuchsia colored, sequin covered appliques in the shape of flowers and leaves.

The Mission native is the daughter of Mr. Arnold Cavazos and Deborah Cavazos. Victoria is a senior at Veteran’s Memorial high School where she is ranked 4th in her class and is the senior class president of the Hidalgo County Cotillion.

Her full-length ball gown of a vibrant ruby red had a fitted bodice of silk taffeta and sits at her wait. The shawl collar of her gown was in a sweetheart style in the front and in the back sat slightly off the shoulder and was accented with a band of gold lace that encircled the shoulders from the front to the corset-closed back.

Duchess of Butterfly Allison Marie Garza who was named 2nd alternate on the court, Miss Congeniality and Most Photogenic.

The Mission native is the daughter of Mr. and Mrs. Fidel Garza Jr. and is a senior at Veterans Memorial High School where she serves as president of the Harlequin Drama Club and was twice named best actress in a musical UIL one act play. She is also a member of her school’s HOSA, or the Healthcare Occupations Students of America organization.

She wore a ball gown style dress of orange silk covered in a dark orange guipure lace shaped like a butterfly. Draping her cap sleeves was an orange taffeta representing the wings of a butterfly.