The Mission High School girls’ and boys’ soccer teams took the short trip west on Tuesday night to the La Joya ISD Stadium and earned two hard fought victories over their rivals from La Joya High as the District 31-6A soccer season reached the midway point.
All four teams came into the night in the bottom half of the district standings but close enough to the top four that a win and the three points that come with it could keep them, or get them, within striking distance.
The Lady Coyotes came into the night’s opening contest having earned their first district win the night before over PSJA 8–0 behind five goals from Mariela Moreno. The momentum from that big win seemed to carry over to the first half of Tuesday night’s contest as La Joya dominated both the time of possession and the number of scoring chances. Neither advantage, however, turned into goals as the Lady Eagles defense, anchored by goalie Melanie Zavala turned away every threat in a scoreless first half.

The Lady Coyotes kept up the pressure to open the second half, but continued to be turned back. The game’s only goal came 14 minutes into the half when Mission’s Isabela Cruz gained control of a loose ball in the La Joya half of the field and directed a shot past the Lady Coyotes keeper who had rushed out from goal to cut down the angle of Cruz’s strike. Clinging to their narrow lead, the Lady Eagles defense had to step up several times in the last few minutes to make it stand. A Lady Coyotes corner kick from Naidelin Flores slipped past Zavala but was cleared by Galilea Castillo. Two other stops helped preserve the 1–0 shutout. On the first, Zavala left her line, beating a trio of Lady Coyotes to gather in a loose ball near the edge of the box and the second, on a sliding tackle and takeaway from Castillo, turned away another promising attack from the Lady Coyotes. The win improves the Lady Eagles to 3–6 (9 points)in district while La Joya fell to 1–6–1 (4 points).
Lady Eagles head coach William Proctor had high praise for the way his team handled the Lady Coyotes attacks. “(Zavala) is . . . the heart and soul of the defense; she does a great job back there on our close games and she came up big for us today. It was whole team effort. They (La Joya) did have quite a few opportunities but it kind of seemed like it was not big scares.” Proctor has built the team around defense but feels the Lady Eagles will need to get more out of the offense in order to earn more points (and move up the standings) in the second round of district play.

Lady Coyotes head coach Lupe Moreno lamented over the inability of his team to put any of their chances into the net. “We had plenty of opportunities; we just couldn’t finish.” Moreno chalked up some of those misses to his team’s youth. The Lady Coyotes start five freshmen. “It’s the inexperience . . . but they don’t give up; they fight till the last minute”

The second game of the night, won by the Eagles 2–0, was an end–to-end affair for the first 20 minutes, however, much like the girls’ contest, neither team could take advantage of their opportunities. The Eagles broke the scoreless tie on a goal from Eric Calderon with 14 minutes left in the first half, set up by an assist from Juan Silva. Saul Cruz’s sliding tackle on Ciro Verdin stopped a chance at an equalizer for the Coyotes 10 minutes later and the Eagles made it 2–0 just before the break on a blistering shot from Emmanuel Escobedo that got through despite a big effort from Coyotes’ keeper Leonardo Quintana to stop it. 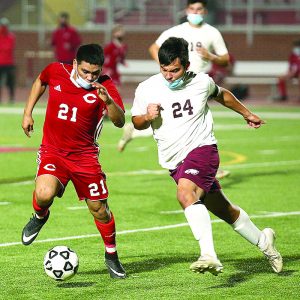 Quintana had to come up with several more saves in the second half to keep the deficit at two but the Coyotes could never crack the Eagles strong back line, anchored by Daniel Castillo and goalie Joey Ortiz. Both teams now stand at 3–5–1 (10 points) in district.
Eagles head coach Christos Barouhas liked how his team is coming around after a severely shortened slate of pre-season scrimmages, tournaments and games. “It seems now like we are playing the way we are supposed to.” Barouhas credited his team’s error free play for the victory. “In previous games we were making one or two mistakes and that would affect everybody; that would affect the whole flow of the game and whenever we had chances we couldn’t score. But today we didn’t see (any) mistakes at all; they (his backline) cleared the ball well, they connected well with the middle and after that it was (just) a matter of time to score.”
Coyotes head coach Alex Davila, who only returned one starter from last years’ team, talked about his players and what he would like to see over the last half of the season. “We have a good committed team with humble kids.” Davila hopes they “keep building on the small things we have made progress in. They showed some glimpses tonight.”
Both Mission High squads get the chance to add to their point totals with scheduled games against Edinburg North tonight at Tom Landry Stadium. The girls play at 6 pm and the boys are scheduled to kick off at 8 pm.
La Joya will travel to Edinburg tonight for a double header against Vela High School. The girls play at 6 pm and the boys at 8 pm.