Last year high school basketball teams across the Lone Star state had the good fortune of being able to complete their entire seasons before the COVID-19 pandemic started wreaking havoc with sporting events across the state, the nation and even the world. 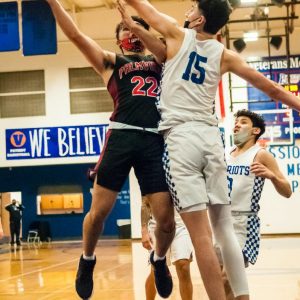 Mission Veterans’ Jacob Arena goes for the block as Palmview’s Jorge Speedon takes a shot during the second quarter of the Patriots 68-59 win over the Lobos Tuesday night. Progress Times photo by Luciano Guerra

Thanks to the fact that Texas high school teams’ regular seasons ended in mid-February and the UIL state playoffs came to a conclusion in early March, just before the NBA’s suspension of their season started a chain reaction of professional, collegiate and high school teams’ cancellations of games and suspension of seasons, it was pretty much business as usual for local hoops teams last year.

With the girls basketball regular seasons having come to an end last week and their playoffs kicking off this week and with the boys regular seasons ending this week and their playoffs kicking off next week, all as scheduled, one might think that the pandemic had little to no effect on these teams this year either. Unfortunately, nothing could be further from the truth. That’s because most high school basketball teams across the Valley had to alter their schedules at least once this year, either due to a quarantine on their team or on one or more of their opponents, just to get all their games in. 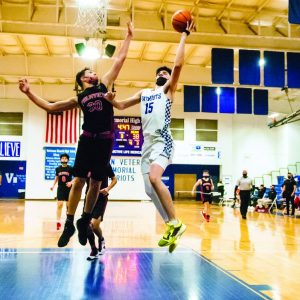 Mission Veterans’ Jacob Arena goes in for a layup as Palmview’s Homer Castilla goes for the block during the third quarter of the Patriots 68-59 win over the Lobos Tuesday night. Progress Times photo by Luciano Guerra

But get their games in they did, and while most of the boys teams have at least one game remaining in their district schedules, those teams that either have already earned, or that are hoping to earn, the right to participate in post-season play, are looking forward to the opportunity to keep on playing.

So which boys’ teams from the Mission, Sharyland and La Joya school districts, the Big 7, have already punched their tickets into the playoffs and which are still in contention? As of the completion of Tuesday night’s games, the La Joya Coyotes, the Mission Veterans Patriots and the Pioneer Diamondbacks are in, while the Sharyland Rattlers and the Palmview Lobos are still fighting for one of the four playoff spots in their respective districts.

Unfortunately for the Palmview Lobos, their playoff chances took a big hit Tuesday night when they fell to the Mission Veterans Patriots by a score of 68-59. While the Lobos hung in tough against the Patriots through the first half, trailing by only two points at halftime, the Patriots pulled out to a 12 point lead at the end of the third quarter en-route to their eventual nine point victory.

While Palmview Lobos’ third year head coach Albert Carrillo was disappointed by the loss, he knows that his young team has better days, and years, ahead.

“This season we’re very young,” Carrillo said. “I’ve got a lot of sophomores and a lot of juniors and I have no seniors this year. Six of my key guys that were supposed to come back this year, did not come back because their parents wouldn’t let them play. But nonetheless we’re still doing a good job and we’re going to be there. We’re still in the hunt for the playoffs this year and while we still have a lot of work ahead of us, we’re getting better.”

Entering Tuesday night’s game the now 2-7 Lobos were in a three-way tie for fourth place, and District 30-5A’s final playoff spot, with Roma and Laredo Cigarroa. A win against the Patriots would’ve kept the Lobos destiny in their own hands. As things stand now however, the 2-7 Lobos will need big time help to revive their slim playoff hopes.

But the long odds of a playoff berth for his team have not caused Carrillo to lose hope.

“They’ve (his players) been doubted but they’re going to keep fighting,” Carrillo said immediately after the Mission Vets game. “That’s the good thing about my players. That’s why I’m happy even though we’re on the losing end of this game. I’m happy about them and the way they fight. This season’s not done yet. We made the playoffs last year and we’re trying to get back to the playoffs this year.”

Mission Veterans’ Jacob Arena goes in for a layup as Palmview’s Homer Castilla goes for the block during the third quarter of the Patriots 68-59 win over the Lobos Tuesday night. Progress Times photo by Luciano Guerra

As for the Patriots, their win Tuesday night improved their district record to 6-3 as head coach Jose Ramos and his players look forward to closing out district play at Roma tonight. The fact that his team had to make it through a quarantine, makes the fact that the Patriots are playing as well as ever right now mean all that much more to Ramos.

“I’m really happy that we got back to where we were at before,” Ramos said. “We were playing very well before the quarantine and then we had to play three games in a row after the quarantine. We had one practice and then we had to play Thursday, Friday and then Saturday in Laredo. Then we were able to get back into rhythm so we’re playing better now and we’re pretty excited about where we’re at right now.”

Unlike the Lobos, who have no seniors on their roster, the Patriots’ roster is senior heavy. That is something that Ramos is especially grateful for.

“With the limited amount of practice time we’ve had, it has helped us to have so many seniors,” Ramos said. “In a regular year we would’ve had the athletic period to practice but right now we only have an hour and a half to practice. So while it has been difficult, it definitely has been a lot of help to have the seniors throughout the district season.”

When asked what it means to him to be able to continue the winning tradition that the Patriots’ boys basketball teams have established over the years, Ramos said, “Being able to continue that tradition means a lot to me. But it’s not only the boys basketball team that has had so much success. The Patriots, Veterans, has a lot of history in a lot of sports. So it’s been a blessing being part of it. I’m just having fun coaching the guys and so far it’s turned out well for us.”