The president of the La Joya school board sent profanity-laced text messages in October, insulting Hidalgo County Precinct 3 Commissioner Ever Villarreal and promising to fire his wife, a local insurance agent, after Election Day.

School board President Oscar “Coach” Salinas won the election and apparently followed through. The school board fired Ruth Villarreal on Dec. 2.

“The new commissioner won’t play these games,” said attorney Javier Peña of Edinburg, who represents Ruth Villarreal in a breach of contract lawsuit against the La Joya Independent School District. “And his wife gets punished for it.”

Mercedes-based L&G Consulting Engineers hired Salinas in February 2019 to provide “Professional Services associated with sales,” according to a copy of his employment agreement. L&G agreed to pay him $8,000 a month.

Salinas and the faction that supported Flores backed candidates for La Joya school board, Palmview City Council and the Agua Special Utility District board in November. Many of their opponents had supported Ever Villarreal during the primary.

“ever’s group just lost more people due to NO PAYMENT for helping them on their loosing campaign!” Salinas wrote, according to screenshots of the text messages obtained by the Progress Times. “They already LOST 3 of their Capitan’s since weeks ago! Plus more people they have mistreated in the process.”

In a long, rambling text message, Salinas complained about another engineer donating money to people affiliated with Ever Villarreal and promised to fire Ruth Villarreal after winning the election.

“We WILL BE FIRE HIS WIFE ON SWEARING IN DAY GUARANTEED!” Salinas wrote. “So fire me also. But Eddie, Fuentes, and Elle…? Will know! Joe WAS GOOD TO YOU FOR 20 YEARS…?????”

Salinas concluded by demanding that L&G renegotiate his contract. Garza responded on Oct. 30.

“Based on this txt you sent me, I don’t need to renegotiate any contract with you and also we at L&G do not condone this type of politics,” Garza wrote. “Your employment was based on helping out the current commissioner but I believe this is no longer the case. I will send you your last chk on Monday.” 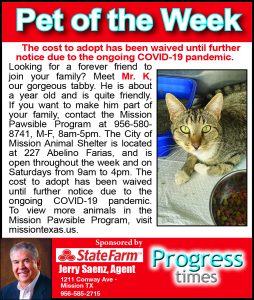 “The circumstances surrounding the text message mentioned in the lawsuit are as follows,” Salinas said in a statement. “Following the victory of Ever Villarreal as County Commissioner, my employer at the time was placing pressure on me to not take any negative action against Ruth Villarreal amongst other things. I know that this pressure was coming directly from Mr. Villarreal. I know because my employer at the time told me.”

“I was promised that if I did not take any negative action against Ruth Villarreal that my employer L&G would fundraise money for my campaign, keep me employed, and even renegotiate my terms of employment to more favorable terms,” Salinas said in the statement. “After a lot of thought, I decided to do what was right and not commit to do anything that I did not believe was in the best interest of the District. Shortly after that I was fired from my job. The text mentioned in the lawsuit was in response to me being notified that I no longer worked for my former employer. I sent it in frustration and anger. After I sent it I immediately called our attorney to notify them. I know it was wrong, but I was angry and concerned about my livelihood at the time. I was being punished for doing what I thought was right.”

Salinas, though, sent the text messages on Oct. 10 and Oct. 25, several days before L&G fired him.

Asked about the apparent discrepancy, Salinas said he knew L&G was planning to fire him for weeks before Garza texted him on Oct. 30.

“How would you feel when they fire you for no given reason?” Salinas said in an interview.

The text messages may become a key piece of evidence in a breach-of-contract lawsuit that pits Ruth Villarreal against La Joya ISD.

Ruth Villarreal wants La Joya ISD to pay nearly $3.5 million plus attorneys fees. A status conference in the case is scheduled for Feb. 17.