After more than 16 months in bankruptcy, Hidalgo County EMS is “hemorrhaging cash” and “has no reasonable likelihood of rehabilitation,” according to a motion filed Monday by the Office of the United States Trustee, which monitors bankruptcy cases.

The motion asks a judge to either dismiss the case — leaving the company without any protection from creditors — or convert the Hidalgo County EMS bankruptcy from Chapter 11, which protects a business during reorganization, to Chapter 7, which provides an orderly process for business liquidation. 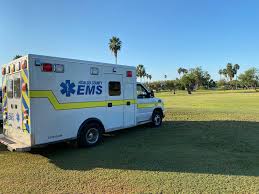 “The Debtor is operating at a loss. There is no evidence to show that Debtor has the ability to reorganize,” according to the motion. “Based on these facts, the debtor has no reasonable likelihood of rehabilitation.”

The bankruptcy court, however, will almost certainly avoid any action that would disrupt ambulance service.

“Their service is absolutely essential,” said Hidalgo County EMS Chief Restructuring Officer Richard S. Schmidt of Corpus Christi. “It will not be lost.”

Hidalgo County EMS, a privately owned ambulance company that responds to emergency calls in Edinburg, Pharr and other parts of South Texas, filed for bankruptcy in October 2019.

While the company had assets worth $12.1 million, Hidalgo County EMS owed nearly $6.8 million to creditors — and had less than $72,000 in the bank, according to a financial report filed in November 2019.

“We have been working as quickly as possible to reorganize it in a way that the services provided by the company will survive,” Schmidt said.

The coronavirus pandemic and a dispute with the U.S. Small Business Administration over whether or not Hidalgo County EMS qualified for a Paycheck Protection Program loan complicated the bankruptcy case.

Hidalgo County EMS owed about $2.6 million to the IRS, according to the November 2019 financial report.

Hidalgo County EMS obtained a nearly $2.6 million loan through the Paycheck Protection Program in the middle of a legal battle with the Small Business Administration.

The U.S. Attorney’s Office for the Southern District of Texas, which represents the federal government in the bankruptcy case, accused Hidalgo County EMS of fraudulently obtaining the loan. Hidalgo County EMS denied any wrongdoing.

“And there is a legal issue as to the status of the SBA debt,” Schmidt said. “We believe it should be forgiven under the PPP program. The SBA does not believe that.”

The U.S. Attorney’s Office filed a motion in August, warning that “dishonesty by a debtor-in-possession threatens the integrity of the bankruptcy process.” It accused Hidalgo County EMS owner Kenneth Ponce of self-dealing and requested the appointment of a trustee to supervise the company.

“The debtor, which has not filed a plan of reorganization after more than sixteen months in chapter 11, has suffered an average monthly net loss of -$310,796.27 during the months of July 2020 through November 2020 with negative cash flow of -$356,849.79 per month during that period,” according to the motion filed on Monday. “Because the debtor is hemorrhaging cash and thereby suffering a substantial and continuing loss and diminution of the estate, the debtor has no reasonable likelihood of rehabilitation.”

When a bankruptcy case stalls or a business fails to submit a reorganization plan, the Office of the United States Trustee may file a motion to convert the case to Chapter 7.

The IRS debt and uncertainty about the Paycheck Protection Program loan complicated the preparation of a traditional reorganization plan, Schmidt said. Hidalgo County EMS, though, is working hard to come up with a plan to preserve ambulance service.

If the company is sold, Schmidt said the buyer will be someone with experience in emergency medical services.

“We hope that we will have a big announcement in a couple of weeks of our reorganization plans,” Schmidt said.

A hearing on the motion filed by the Office of the United States Trustee is scheduled for March 26.