For three of the four Big 7 basketball teams that qualified for the playoffs, things are going great; at least as of Wednesday afternoon. That’s because until the Mission Veterans boys’ basketball team lost their first round game Tuesday night, the Big 7 teams were undefeated in five games. Three of those wins by the Pioneer Lady Diamondbacks and one game each by the La Joya and the Sharyland Pioneer boys teams.

As the only Big 7 basketball team to lose their first round game, the Mission Veterans Patriots fell to the Flour Bluff Hornets by a score of 58-45. That game was played Tuesday night at Alice High School. The Patriots entered the playoffs as the third seed in District 30-5A with a 6-4 record.

The Patriots played the Hornets tough as they only trailed by four points when the third quarter clock had ticked down to double zeros. However, Flour Bluff outscored Mission Vets 15-6 in the fourth quarter to end the Patriots season by pulling out their 13 point win.

The Pioneer boys defeated the Donna Redskins on their home turf by a score of 63-55 in the bi-district round last Friday. The Diamondbacks, who finished their District 31-5A regular season one game out of a three-way tie for first place with Niki Rowe and McAllen High, compiled a 9-3 record to enter the playoffs as the district’s third seed. Their area round game against the Victoria West Warriors, which barring a last minute schedule change, was played Wednesday night at Corpus Christi Calallen. 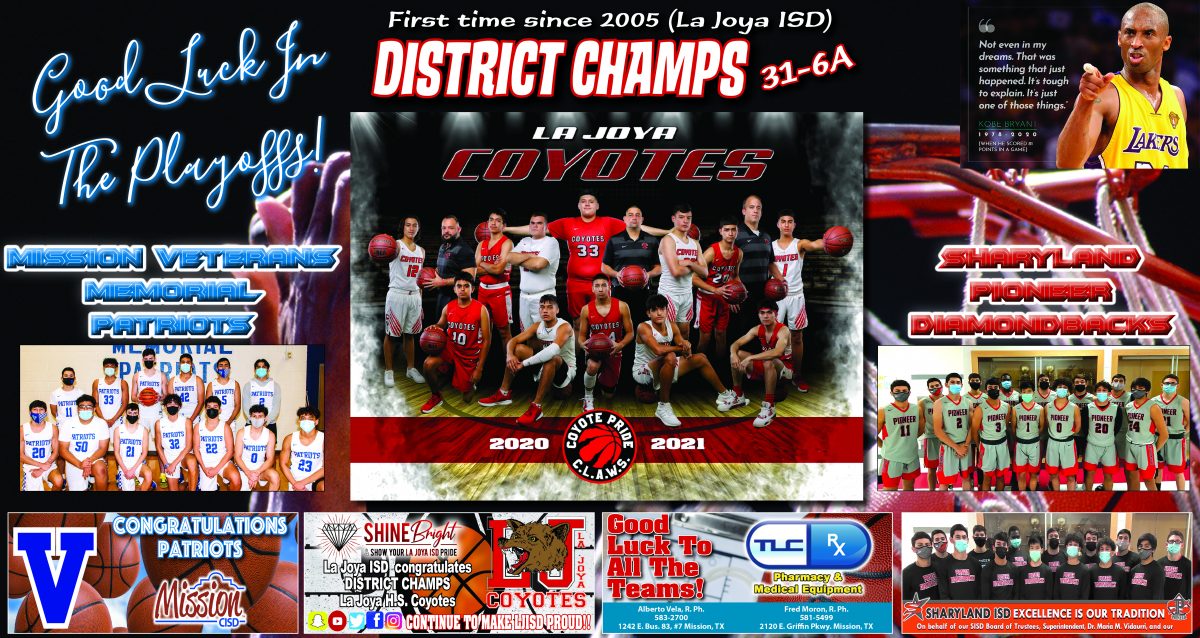 The Warriors, who compiled a 14-2 District 29-5A record to finish their regular season in a first place tie with Flour Bluff, are coming off a 93-39 thrashing of the Roma Gladiators in their bi-district round match-up. Last year Victoria West was eliminated in the bi-district round of the state playoffs by Laredo Martin, while the Diamondbacks advanced into the Regional Semifinals, also known as the Sweet 16, where they lost to San Antonio Harlan by a score of 71-65.

The Sharyland Pioneer Diamondbacks were defeated by Victoria West.

The La Joya Coyotes are coming off a historic District 31-6A season. Coach Eric Montalvo’s squad compiled a 21-3 overall record and a 13-2 district record to claim their first district championship in 16 years. Saturday they claimed a bi-district championship as they defeated the Harlingen South Hawks by a score of 67-51. In that game the Coyotes were led offensively by Bernie Vera with 18 points, J.C. Barrientos with 17 points and Cesar Villarreal with 15 points. 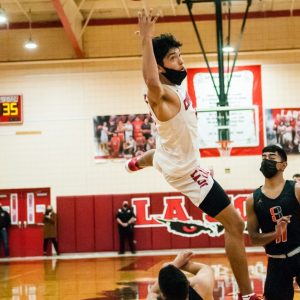 La Joya’s Ethan Moya goes through a Harlingen South defender as he goes in for a layup, during the fourth quarter of the Coyotes’ 67-51 bi-district round victory over the Hawks. Progress Times photo by Luciano Guerra.

After putting together such a successful season, Montalvo knew that it would be all for naught if his team failed to advance into the second round of the playoffs like they did last year.

“That’s what we talked about since last year,” Montalvo said. “Our goal was to win a district championship and then to advance into the second round. Last year I thought that we played well. We were just very inexperienced and we competed but we lost.”

As the Coyotes’ center and power forward, Vera, who is in his senior season, is one of La Joya’s most potent weapons on both offense and defense.

“Bernie is one of our workhorses,” Montalvo said. “We really depend on him to carry us on the offensive end, and even on the defensive end, rebounding wise.”

When asked what makes his team so good that it not only went all season with only three losses but it also defeated a good team like Harlingen South fairly easily, Montalvo said, “They’re a great defensive team and we knew that we had to come into this game and control the boards and play our game. Coach Molina does a great job with that program. We just have to do what they do on a year-in and year-out basis. But for now we just need to get ready for our next game.” 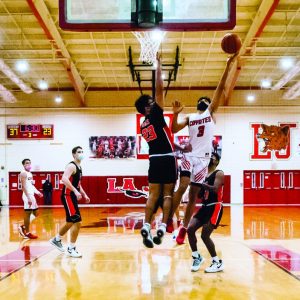 La Joya’s Ethan Moya goes up for a jump shot as a Harlingen South defender goes for the block, during the third quarter of the Coyotes’ 67-51 bi-district round victory over the Hawks. Progress Times photo by Luciano Guerra .

As is the case with all high school sports teams over the past year, the Coyotes have had to deal with so much uncertainty on a daily basis due to the COVID-19 pandemic. The fact that they have succeeded despite not knowing what the future held is a testament to the way Montalvo, his coaching staff and their players approached the season.

“Our success is not something that we take for granted,” Montalvo said. “We talked to the kids with this pandemic and we told them that we have to be thankful and appreciate all we have. Also, that we need to take advantage of every game we get because at any point we could be shut down. We’re grateful for the support that we’ve received from the community and from our administrators all season long.”

Like the Diamondbacks, the Coyotes’ area round game was scheduled to be played this past Wednesday in Corpus Christi. Their opponent, San Antonio Harlan, defeated Laredo Alexander by a score of 64-56 in the bi-district round. The Coyotes were defeated by Harlan, bringing their historic season to an end.

The Coyotes are not the only Big 7 team to have put together a historic 2021 season. By defeating Victoria East in the regional quarterfinals Tuesday night, the Pioneer Lady Diamondbacks have advanced into the regional semifinals for the first time in school history. In their 58-53 win over the Lady Titans, the Lady Diamondbacks were led offensively by Audry Hornaday, who scored 16 points, and by Jordan Bravo, who scored 15.

Next up for the Pioneer girls will be the Georgetown Lady Eagles who defeated Boerne-Champion by a score of 42-41 in their regional quarterfinal round match-up. The date, time and location of this game was yet to be determined at press time.