The four soccer teams from Sharyland ISD met at Richard Thompson Stadium this past Tuesday night with a variety of possibilities riding on the outcomes of the two games. In the end, little changed for any of the teams as the four continue to work toward gaining a playoff spot from District 31 -5A.
Both the girls and boys teams from Sharyland High came away with victories over Pioneer, allowing each to remain in second place in their respective division with only a few games left in the regular season. The loss kept the Pioneer boys squad in third for the time being but prevented them from making a move up the district standings. For the Lady Diamondbacks, the loss increased the importance of their upcoming games. 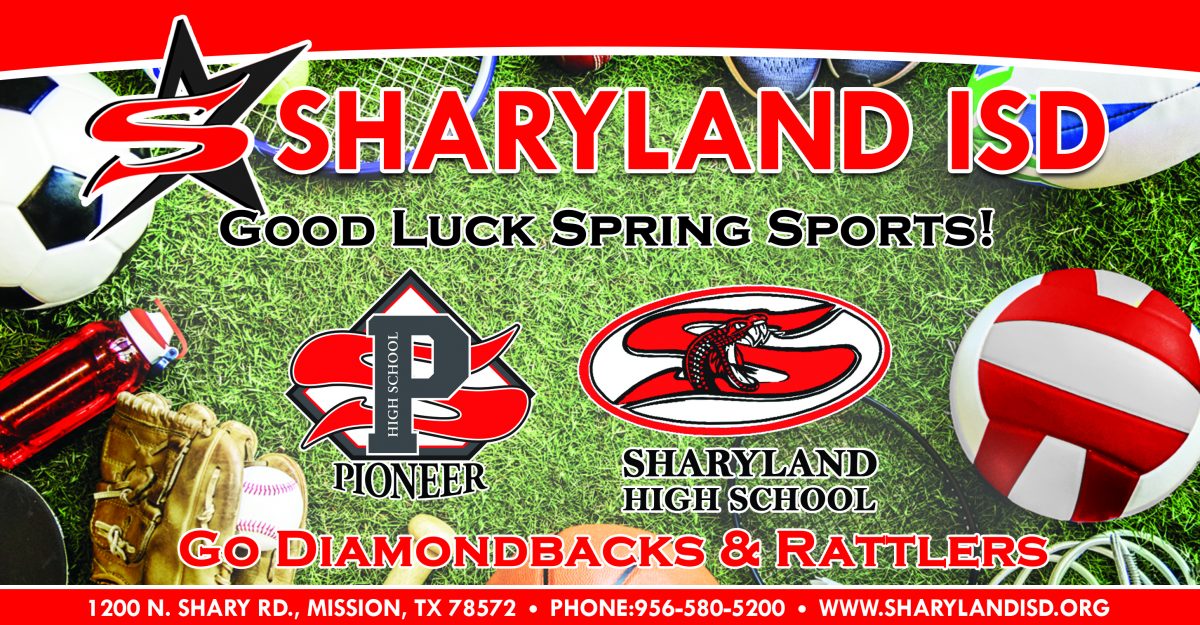 The Lady Rattlers won the night’s opening game 2 – 0 to improve to 10 – 1 in district and 15 – 1 overall. The game was not as close as the final score indicated as Sharyland dominated both time of possession and scoring opportunities thanks, in large part, to the mid-field play of Hiromi Marquez.
Lady Rattlers head coach Mario Ribera spoke highly of both Marquez and his entire team after the game. “She (Marquez) is a young player that moves the ball very beautiful.” Ribera went on to compliment his backline defenders as well and the overall play of the team in general. “I think tonight, it was very obvious. We controlled the whole game, we created opportunities.”
Senior Xochitl Nguma accounted for both of the Lady Rattlers goals in the victory, glancing a ball into the net off the post from 20 yards out midway through the first half for her first and drilling in her second of the night from the edge of the box early in the second half. Nguma’s two goals upped her season total to 47.
Next up for the Lady Rattlers is a chance to avenge their only loss of the season as well as move into a tie for first in the district when they travel to McAllen tonight to take on the district leading Lady Bulldogs of McAllen High.

The loss dropped the Lady Diamondbacks to 4 – 5 in district play and left head coach J. J. Lopez concerned over his team’s inability to get anything going on the night and how several injuries over the last few games have hampered his team. “I’ve got to figure out a way to get into these girl’s heads and say, ’Hey . . . the season’s not over, we can still make the playoffs.” After a game with PSJA Memorial tonight, Pioneer has two big games with McAllen Memorial next week, a team that the Lady Diamondbacks are fighting with for a playoff spot, as well as a game with McAllen High.
In the nightcap, the Rattlers broke open a close game with a goal just before the end of the first half and two more early in the second half en route to a 5 -2 win that allowed the team a little breathing room in the standings between themselves and the visiting Diamondbacks. Both teams entered the night with 7 – 3 district records with the Rattlers holding onto a slim one point over the Pioneer for second place in the district due to having earned more points from penalty shootouts than the Diamondbacks. The victory, and the three points that came with it, improved the Rattlers record to 8 – 3 and helped the Rattlers increase their point gap over Pioneer to four. Valley View currently leads the district with an 11 – 0 mark, seven points ahead of the Rattlers.
The game was scoreless until the Rattlers Luis Tellez headed in a cross from Juan Trevino with just under 12 minutes to play in the opening half. Three minutes later it was 2 – 0 Rattlers after Tellez was taken down in the box and Jose Sanchez blasted in the penalty kick awarded for the foul on Tellez.
Pioneer cut the gap on a Mario Gonzalez goal less than a minute later but the Rattlers took control with a goal from Alex Jarvis just before the half and two more in the first six minutes of the second half; the first on a long free kick from Sanchez and the second on a strike from Trevino off a pass from Marcelo Ancer. The Diamondbacks Gus Sandoval closed out the scoring with a goal just minutes before the final whistle.

Rattlers head coach Reveriano Hernandez liked what he saw after Pioneer had closed the gap to one following the Gonzalez goal. “It (his team’s response) was . . . a very good one. They (his players) started doing the things we do in practice; playing soccer instead of (just) running . . . playing kick and run. We were playing smart.”
The victory for the Rattlers avenged a 1 – 0 loss earlier in the season to the Diamondbacks. “I guess it was our day today,” added Hernandez. The Rattlers had four different players score and recorded assists on two of their five goals. “We’re getting to the point where we want to. That’s what you want as a team; to play together.”
That type of play is coming at the right time for the team, who close out their season with a game tomorrow against McAllen High and then face the district’s current fourth place team (PSJA Memorial) and district leader Valley View next week.
The loss dropped the Diamondbacks to 7 – 4 in district but the team remains in third place as the season winds down. Head Coach Alex Lopez cited his team’s inability to stick with their game plan as well as the way the Rattlers played as contributing factors in the defeat. “They (Sharyland) looked very different from the first time we played them.” The Diamondbacks face PSJA Memorial tomorrow and the district’s fifth place team (McAllen Memorial) twice next week.; all critical games in deciding who will a make the postseason and who won’t.