It was an odd feeling walking into the sports complex at Palmview High School this past Tuesday night for the District 30 – 5A baseball opener between the Lobos and the visiting Mission Veterans Patriots. I hadn’t covered a baseball game since June 6, 2019.
The main reason, of course, was the suspension of all extracurricular activities by the University Interscholastic League (UIL) in the spring of 2020 due to concerns over the coronavirus. There were a few games played before the shutdown but I had been assigned, among other things, to cover softball and soccer games.
That shutdown kept us all from getting to see what was expected to be a highly competitive race for District 31 – 5A supremacy between three teams from the district (Palmview, Sharyland High and Sharyland Pioneer) who had all made deep postseason runs in 2019, including, of course, Pioneer High’s trip to the state semi-finals. 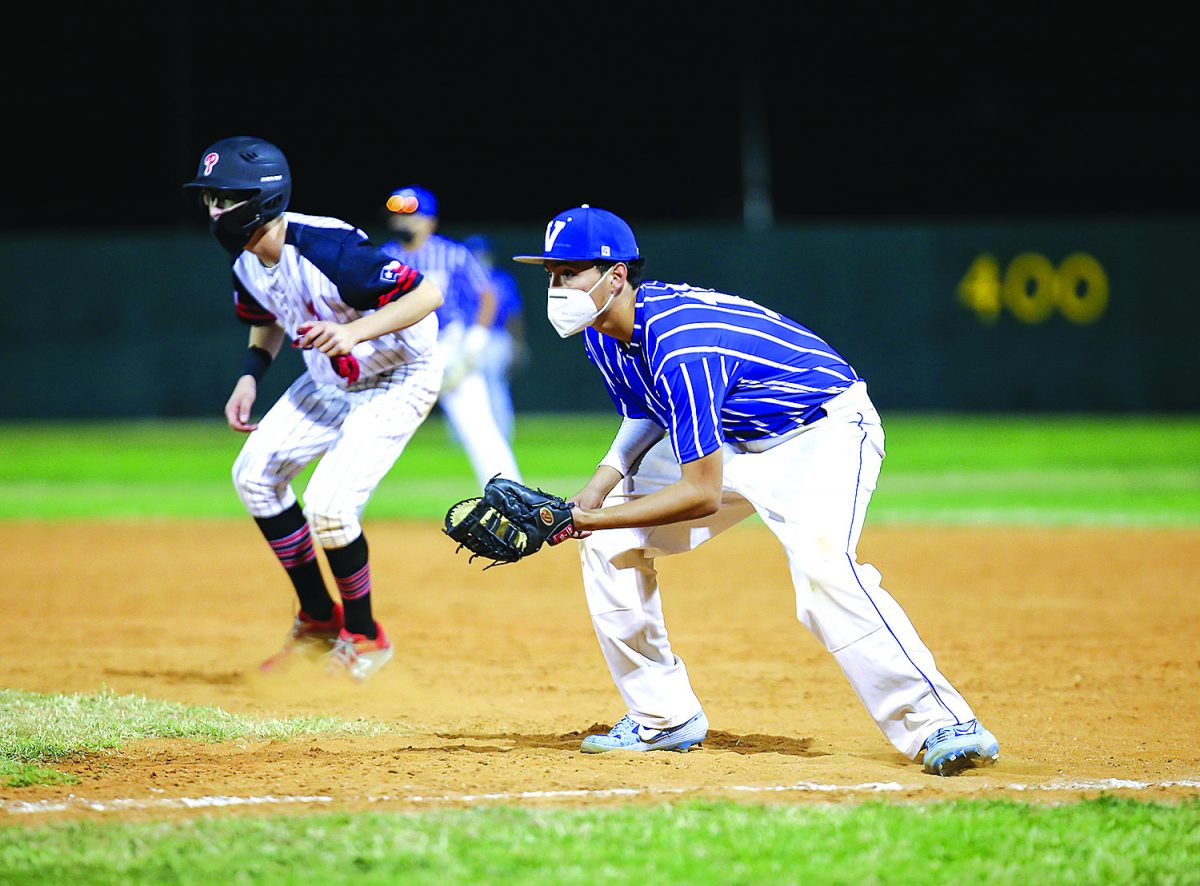 This season will have a different look to it and by that, I don’t just mean the reduced number of spectators, the masks and the social distancing. UIL redistricting in February, 2020 moved both Palmview and Veterans out of District 31 – 5A and into District 30 – 5A. A few of those big regular season rivalries from past years will have to wait, possibly, for the post season this year. Of course, you have to get to the playoffs first. That means winning games against district opponents. The Palmview Lobos Baseball Twitter page put it another way in a post Tuesday afternoon that read “The real season begins today.”
Tuesday night’s game was not, however, the first of the season for either team. The Lobos came in with a 4 – 0 – 1 record while the Patriots stood at 3 – 4 in non-district action from games that began in late February.
It was the Lobos who came away with the district opening victory, taking a 3 – 0 lead going into the seventh inning and holding off a Patriots rally to win 3 – 1. The win puts Palmview at 5 – 0 – 1, 1 – 0 on the season. The Patriots dropped to 3 – 5, 0 – 1.
The Lobos used a combination of strong pitching, timely hitting and some heads up defensive plays in the victory. A double play started by third baseman Gael Gonzalez helped get starting pitcher Herminio Gonzalez out of a two on, one out first inning threat from the Patriots. Gael Gonzalez scored the Lobos first run of the night in the bottom half of the first on a two out RBI single from Ezie Puente.
The Patriots threatened again in the second but Herminio Gonzalez got a strikeout to end the inning with two Patriots runners in scoring position and then helped his own cause with a two out single in the bottom of the inning to shallow right field that fell just inside the foul line. The hit scored Josiah Gonzalez, who had led off the inning with a double to left. Gael Gonzalez made it 3 – 0 in the third, scoring his second run of the night when Chris Chapa drew a two out bases loaded walk.
The score would stay that way until the seventh as Herminio Gonzalez allowed only one baserunner over the next three innings before giving up two hits to the Patriots to start the seventh. The Patriots finally got on the board thanks to a sacrifice fly from Ricardo Vasquez that plated Reynaldo Martinez. Martinez entered the game as a pinch runner for Roque Rodriguez, who had opened the inning with a base hit. Quincy Handy got on after Rodriguez with an infield hit that put the Patriots in position for a big rally with two on and no outs. The Lobos answered with a heads up play from right fielder Anakin Robles, who raced in to field a ball that landed just past the infield and fired a strike to first base for the inning’s first out. Vasquez’s sacrifice fly was followed by a Gonzalez strikeout to end both the rally and the game.

Gonzalez, a freshman, went the distance on the mound for the Lobos, giving up only three hits while striking out six. Lobos head coach Manuel Garcia Jr. spoke about his pitcher’s night. “The young man did a great job. He’s coming into his own. He doesn’t throw very hard but he throws strikes and he makes people miss or makes sure they put the ball on the ground. That’s a plus for us.”
Garcia went on to compliment his other players as well. “They’ve put in their time and effort, working hard, making sure that we do well when we go out and perform, “ adding that, “at this point they’re performing pretty good. We just hope there is room to improve. There always room for improvement and I feel that we can do that.”
The Patriots used three different pitchers on the night, most notably Vasquez, who kept Veterans in it by retiring nine of the 13 batters he faced over the course of three plus innings, recording three strikeouts in the process.

Patriots head coach Ben Gonzales talked about his pitchers and how the overall game played out on the night. “They’ve done a decent job . . . tonight we just couldn’t get the outs we needed at the time we needed them,” said Gonzales. “The boys battled and they tried to push there to score a couple of runs and we fell short. We were hitting everything right at them and they (Palmview) were doing a good job defensively.”

It was a good night for several other Big 7 teams this past Tuesday as well. Both Sharyland High and Sharyland Pioneer opened District 31 – 5A play with victories. The Rattlers defeated Valley View 6 – 1 and the Diamondbacks took down PSJA Southwest 9 – 1. The wins continued the strong starts for both squads; Sharyland is 10 – 1, 1 – 0 on the year while Pioneer is 11 – 1, 1 – 0.
In District 31 – 6A play the La Joya Coyotes ran their record to 4 – 0 with an 11 – 1 win over Edinburg North, while the Mission Eagles won their first game of the year over Juarez-Lincoln 11 – 3. The Eagles improved to 1 – 4 and the Huskies fell to 1 – 3. Neither of the three 31 – 6A teams have played any non-district games to date.
All seven Big 7 teams are back in action this weekend with either district or non-district games tonight, tomorrow or both days.