Concerned about the coronavirus pandemic, U.S. District Judge Randy Crane on Tuesday rescheduled the city of La Joya corruption trial from April to May.

The blockbuster corruption case, which resulted in the arrest of former La Joya Mayor Jose A. “Fito” Salinas, involved schemes to siphon money from the city of La Joya, the La Joya Housing Authority and the La Joya Economic Development Corp., according to federal court records.

Crane had tentatively scheduled jury selection for April 6. During a brief hearing on Tuesday afternoon, though, Crane decided to delay jury selection until May 4. 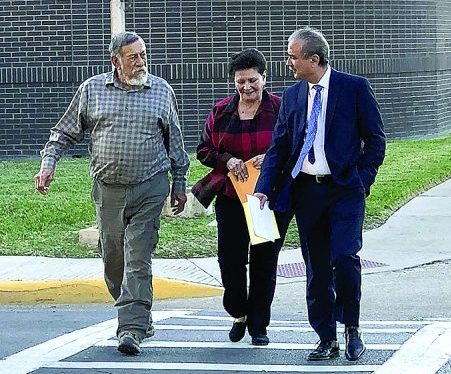 “This is a case that I want to push to trial, but only if we can do so safely,” Crane said. “I don’t think that by April we can be ready.”

Without herd immunity or a sufficient number of vaccinated people in the community, Crane said he couldn’t bring four defendants together for trial.

“That’s just too much congestion in a courtroom,” Crane said.

Bumping the trial from April to May will also provide additional time for attorneys to resolve several major issues.

Sylvia Garces Valdez, a public relations consultant accused of paying kickbacks to the mayor’s daughter, Frances A. Salinas, may plead guilty and testify against them at trial. She’s a relatively minor player in the case, which focuses on the Salinas family.

Alaniz worked for Frances Salinas, the interim executive director of the housing authority, from February 2017 to November 2018, according to the indictment. When she took control of a La Joya Economic Development Corp. project, Frances Salinas made him the general contractor.

Frances Salinas told Alaniz to inflate invoices and arrange kickbacks for her during construction, according to the indictment.

In January, when the court held a status conference on the La Joya corruption case, Crane said he anticipated that Garces Valdez and Alaniz might plead guilty.

“Reading between the lines,” Crane said on Jan. 29, the cases probably would be “worked out.”

A potential problem for Alaniz surfaced on Tuesday, when his attorney filed a motion to withdraw.

In the motion, attorney Gregorio R. Lopez of McAllen said he was “unable to effectively communicate with Ramiro Alaniz in a manner consistent with good attorney-client relations.”

A new attorney may need months to review the evidence, meet with Alaniz and prepare for trial, delaying the case again.

Another potential wild card is Fito Salinas, the 82-year-old former mayor, who is apparently in poor health.