Making history is not something that every high school athlete gets an opportunity to do. However, every member of the La Joya Coyotes boys’ and the Pioneer girls’ basketball teams had that opportunity this year as both teams had historic seasons.

Now that both of these teams’ seasons are over, the time has come to honor the players that made it possible for the Coyotes to win their first district title in 16 years and for the Lady Diamondbacks to advance two rounds deeper into the playoffs than any girls’ basketball team at Pioneer High School has ever advanced. It is also time to honor both of these teams’ coaches for the jobs they did leading two very talented groups of athletes to such great heights.

How good was the Pioneer Lady Diamondbacks team? Not only did they have an overall record of 21-3 this season, but they went 14-0 against their District 31-5A opponents to claim their third district title in a row and went on to claim Bi-district, Area and Regional Quarterfinal championships; the last two for the first time in school history.

With that kind of success, the fact that Coach Nicole Villarreal’s squad had much more than their share of players selected to receive All-District honors should come as no surprise to anybody. In addition, Villarreal herself was named 31-5A’s Coach of the Year. 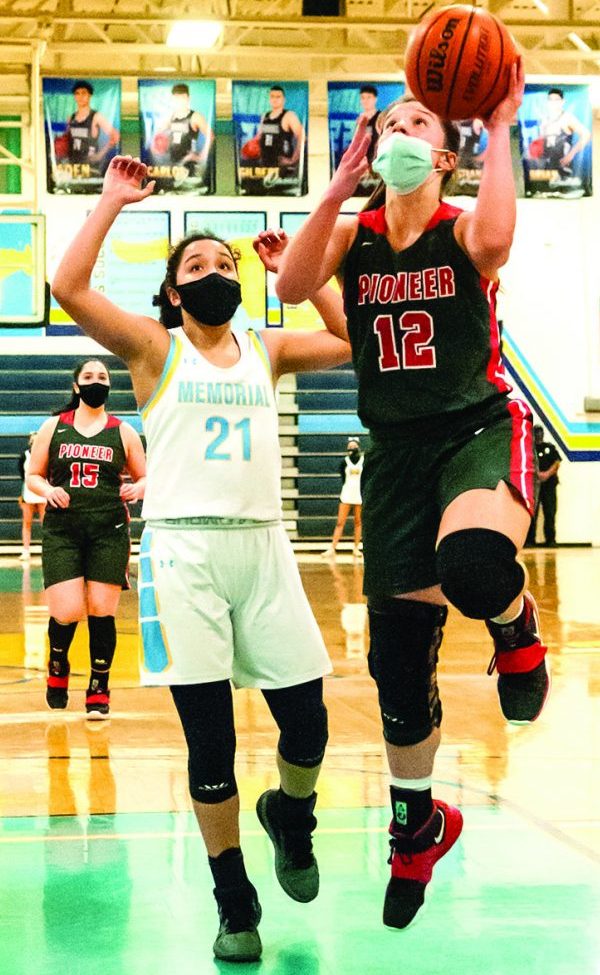 Pioneer’s Audry Hornaday, who was named District 31-5A’s Co-MVP and to the All-District Defensive Team, goes up for a lay-up during the Lady Diamondbacks’ game against McAllen Memorial. Progress Times photo by Luciano Guerra.

While receiving post season honors is not what motivates Audry Hornaday to excel on the court, the fact that she suffered a season ending injury early-on in her junior year made being named 31-5A’s Co-MVP this year mean so much more than it may have otherwise.

At the top of the list of people that Hornaday credits for the success she, and the Lady Diamondbacks, have achieved the past four seasons is Pioneer head girls basketball coach Nicole Villarreal.

“She deserves the world,” Hornaday said of Villarreal. “She’s been not only a coach to her players but a friend to her players. She’s been a mom away from our moms. She takes care of us for anything we need; it doesn’t matter if it’s on the court or off the court. She’s worked just as hard as we have to get us where we are and I’m so happy for her.”

When asked what being so honored meant to her, Carly Hornaday said, “It’s a really big deal for me because my sophomore year I was injured so I knew that I had to make a really big impact this year and last year. But we don’t think about it (being named All-District) at all. We just think about winning for each other and for our coaches, and about having fun.”

“What we accomplished this year was a total team effort,” Hornaday added. “We’re all really great friends outside of basketball so it just plays into basketball. We learn from each other and we teach each other everything. We’re jokesters and we’re best friends on and off the court.”

It’s not often that a Co-MVP and an Offensive MVP are selected from the same team, but that happened this year when junior Jordan Bravo received the latter of those two awards. And with Natalie Reyes and Sofie Ponce De Leon being named 2nd team All-District and Valeria Flores, Hailey Silva and Danielle Rangel being named Honorable Mention, a total of eight Lady Diamondbacks’ players received All-District honors this year.

Having so many of her teammates receive All-District recognition is something that Bravo attributes to the team-first philosophy of the Lady Diamondbacks.

“It’s really good that we all got the awards that we got,” Bravo said. “That proves that it’s not just me and Audry or me and Carly. We have all five players that contribute to playing.”

The 2018-2019 season was not only Bravo’s freshman season, but it was also the first time in school history that the Lady Diamondbacks qualified for the playoffs. The fact that just two years later Coach Villarreal led her team to the fourth round of the playoffs is a testament to her superior coaching abilities and to the way the Lady Diamondbacks came together as a team.

“She’s a really good coach,” Bravo said about Villarreal. “She’s the reason that we’ve gotten this far. She really pushes us to play our best every game. She motivates us and she really believes in what we can do. We just have to do it.”

The La Joya Coyotes may not have had the playoff success this year that the Lady Diamondbacks had, but they did compile a 22-4 overall record and a 13-2 District 31-6A record to earn their first district championship in 16 years. 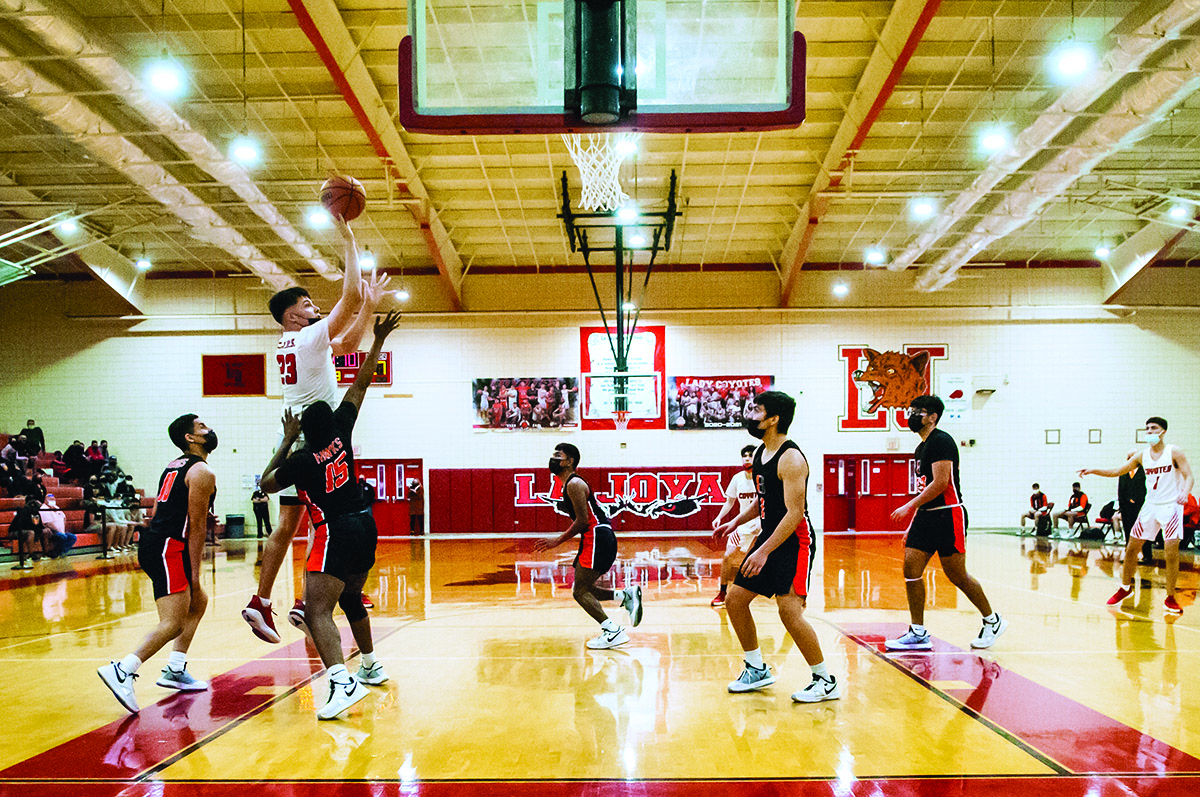 Coming off a junior season in which he was named All-District Honorable Mention, Bernie Vera has made a rather remarkable jump to being this year’s Co-MVP.

“What made the difference from last year to this year is putting a lot of work in during this past summer,” Vera said. “But I always give a lot of props to my coach for letting me play and letting me play the way I want to play. He has a lot of confidence in me and that is a really big boost in the games. It doesn’t matter if I’m having a bad game or I’m having a great game, he always keeps my mind in the game.”

As for Michael Saenz, he attributes the Coyotes’ success and the Defensive Player of the Year honor he received to his and his teammates’ hard work.

“It feels great knowing that we’re a real big part of history because it’s been 16 years since we won a district title,” Saenz said. “It’s an amazing accomplishment to add to my resume, in my thoughts and in my heart. Everybody says that hard work pays off and what we accomplished this year proves that it’s really true.”